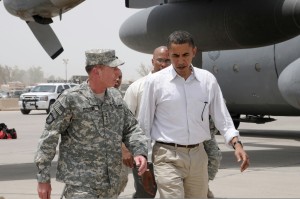 There’s no doubt that Gen. David Petraeus’ affair was a colossal blunder: it forced him from the CIA’s top job and tarnished what had been a sterling military career.

But was the general sharing more than just his bed with a junior officer, and will it land him in prison?

The New York Times reports that the Justice Department has recommended a felony prosecution against Petraeus for sharing classified information with his paramour:

The Justice Department investigation stems from an affair Mr. Petraeus had with Paula Broadwell, an Army Reserve officer who was writing his biography, and focuses on whether he gave her access to his C.I.A. email account and other highly classified information.

F.B.I. agents discovered classified documents on her computer after Mr. Petraeus resigned from the C.I.A. in 2012 when the affair became public.

The key question here is timing. There is evidence, which WhoWhatWhy reported exclusively, that Petraeus’ affair was known to his rivals in the intelligence apparatus as early as 2011. That, and other facts, suggest that Petraeus may have been marked for a takedown.

The decision on whether to move forward with a prosecution apparently remains in the hands of Attorney General Eric Holder. Petraeus, for his part, is unwilling to accept a plea agreement, and has powerful allies pushing for clemency. He remains in his position as chairman of the KKR Global Instititute, the geopolitical arm of private equity giant KKR.

As for Broadwell, her name had all but fallen off the headlines and, it appears, out of the crosshairs which are now aimed at Petraeus. As a military intelligence reservist, she would be intimately familiar with the rules surrounding classified information. If Broadwell accessed material that she knew had been provided illegally, she theoretically could face prosecution, too.

Whether she is investigated or not will be an answer itself to the bigger question we first asked: Was Petraeus targeted, with Broadwell as the bait? Take a look at our investigation and decide for yourself whether it was indiscretion or intrigue.

0 responses to “Careless Whispers? Petraeus May Be Headed for Prosecution”