For Kings and Cabbages alike, the high-profile lecture circuit is a good place to rake in some extra post-public-service cash. And why shouldn’t former government leaders earn some private-sector-sized paychecks to round out their years of sacrifice for the common good?

What sort of enterprises find the wit and wisdom of Bush 43 worth a bushel? Read on, dear friends.

Get Motivated! Get Money

W’s very first speaking gig after leaving the White House, in October 2009, was a star-studded affair at the Ft. Worth Convention Center. Colin Powell, Rudy Giuliani, and Christian motivational speaker Zig Ziglar addressed the crowd, too. The sponsor was an outfit called Get Motivated! (The exclamation point is part of the brand.) 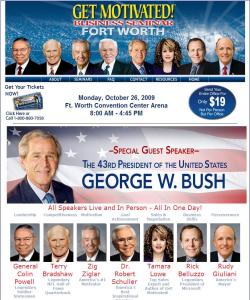 The alternative St. Louis Riverfront Times drew a darker picture, based on an April 27, 2011 seminar that featured, among others, Laura Bush: The celebrities, the paper said, are merely the bait. Once inside the arena, attendees hoping to “get motivated” by the celebrity speechifiers were subjected to:

three-plus hours of sales pitches designed to sell you on the idea that you can make a zillion on the Internet by selling stuff you don’t actually own. Or snapping up foreclosures. Or buying a set of online personal-investment tools.

In other words, the 43rd president was making six-digit figures shilling for “get rich quick” schemes. And, as many of the attendees found out the hard way, they should have read the fine print:

Not one of the speakers counseled you to think before giving your credit-card number to any outfit that, buried in the fine print, advises that it will begin charging a $39 monthly fee unless you sent a cancelation notice to Tampa, Florida, by midnight Saturday. In writing.

No comment is needed beyond noting that Get Motivated! is… no longer in business.  The company closed in 2012, its legacy a series of lawsuits complaining of unpaid bills.

And that isn’t the only shady outfit from which Bush has earned speaking fees.

Bush Helps Himself to Charity

Helping A Hero is a Houston-based veterans’ charity that provides “specially adapted homes for qualifying service members,” according to its website. The charity has faced a number of complaints. It’s now under investigation after trying to seize a home it sold to a blind veteran who later died of a heart attack.

A recent story detailed several abuses at the charity, including alleged misappropriation of donations. In one instance, a promised home was never built. Nonetheless, a trusting military family continued loyally  paying the mortgage on the lot for nearly a year after it was supposed to be completed.

And Eddie Wright, a decorated veteran and former board member of Helping A Hero, found something disturbing: a $20,000 payment to cover travel for an unnamed speaker. Wright was astonished to later learn that the recipient was none other than one of America’s most military-oriented former Commanders-in-Chief—George W. Bush, who flew a private jet from Houston to Dallas for the charity’s 2012 annual fundraiser gala. What upsets him the most, he says, is the fact that Helping A Hero founder Meredith Iler paid Bush $100,000 to speak at the event.

“Why would you charge somebody $100,000 to raise money for men and women who are wounded fighting a war that you commanded us to go fight?” Wright told WFAA TV in Dallas.

Besides working the lecture circuit and painting his pets and his feet, George W. Bush recently wrote a biography of George H.W. Bush, titled 41: A Portrait of My Father. The book is a tribute to the latter, with an emphasis on how integrity and character matter in a leader  It has been greeted with enthusiasm by mainstream media outlets, which have thus far largely avoided Bush 43’s business pursuits.