At WhoWhatWhy, we’re always searching for the real motivations driving events in the headlines. Here, we step back from the overheated coverage about the interplay among Ukraine, Russia, and the West to examine what’s really at stake in Europe and the old Soviet spheres of influence. What we found is part of a thousand-year old pattern, tied to the only real reason for conflict: money.

Vladimir Putin, drumming up Russian nationalism, is stepping up a new battle over Europe. This time, however, the U.S. and Russia aren’t fighting about ideology.

It’s all about money. The battle over Ukraine grabs the headlines, but we’re witnessing the start of a major power restructuring.

Putin’s moves include what Moscow calls the Eurasian Economic Union (EEU), a fledgling trade organization that he’s trying to beef up into his own version of the EU. This is the old-school sort of trade war that Europeans have fought for a thousand years.

Throw in Russia’s renewed “best friends forever” alliance with China based on the new Power of Siberia natural gas pipeline and their increasingly joint efforts to strengthen the Shanghai Co-operation Organization (SCO) in Central and South Asia, and the fight becomes global. But the immediate focus is the three-cornered game of Monopoly over Europe.

Growing concern in the EU about the nascent EEU has helped push Brussels to step up its moves toward the post-Soviet states. Latvia adopted the euro on Jan. 1, 2014, and Lithuania is expected to join the Eurozone on Jan. 1, 2015, the day the Eurasian Economic Union comes into force.

During the Crimean crisis, global media were flooded with reports about how these countries allegedly trembled over the threat of a Russian invasion. It was also an opportunity for the West to assure those post-Soviet states of its support against a threat that… hardly existed. In addition, the EU has  signed free trade agreements with Moldova and Georgia in an effort to slow the expansion of the Eurasian Economic Union.

Appealing more than ever to national pride, Putin seems to be trying to restore Russia’s old Tsarist splendor—but not actually the Soviet Union, as he is often portrayed by the U.S. media. This new empire would by no means be communist—or even socialist.

On the contrary, it would be capitalist, but without bragging about it.

That’s implicit in the common-market structure of EEU: Moscow, at the center, would use the rich resources of the satellite states through strengthened economic ties. Putin’s urgency to propel the union into existence is precisely because of the damage caused Ukraine-related American economic sanctions—Russia’s ruble has hit an all-time low against the dollar.

This is not the Cold War of the last century, but like that conflict, there’s a lot of rhetoric. The war of words between the leaders of the two principal countries is hotter than ever. In August, President Obama dismissively said Russia “doesn’t make anything.” Last month, in an annual appearance at the Valdai Club, a Russian think-tank event, President Putin accused the U.S. of being “Big Brother” and trying to “reshape the world” (transcript). The Washington Post called it “a fiery speech that was one of the most anti-American of his 15 years as Russia’s paramount leader.”

For his part, Obama has “increased pressure on the Kremlin, lumping Russia together with Ebola and terrorism as key threats to world stability.”

Meanwhile, Putin is trying to stabilize his own hemisphere, by giving Russia buffers on his borders. The EEU’s other founding members are Belarus, on the west facing the EU, and Kazakhstan, on the south and bordering China. 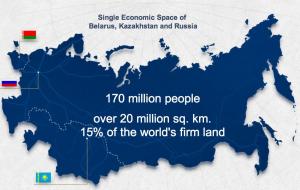 Often seen as an artifact of Putin’s nostalgia for a Russian empire, the nascent EEU has been largely ignored in the West. There, it is considered by some observers a daydream that will be shattered by predicted internal conflicts fueled by Russian attempts to dominate smaller ex-Soviet members..

Yet EEU membership may the only viable way for countries such as Kyrgyzstan and Armenia to protect themselves against other trade blocs, such as NAFTA and the EU. Thus, notwithstanding doubts, fears and resentments, these smaller nations may opt to join because it would give them access to a large market, low prices for gas and an opportunity to get direct budget support from Russia.

Armenia and Kyrgyzstan have already taken initial steps. In 2013, Armenia chose Putin’s economic bloc over a free-trade deal it had already negotiated with the EU. Last month, Kyrgyzstan President Almazbek Atambayev sourly conceded that his country, one of the poorest in Central Asia, has no choice but to cast its lot with the EEU. “No offense, but we’re choosing the lesser of two evils,” he told his country’s National Council for Sustainable Development.

The conflict is fueled by fuel itself. Europe, dependent on Russian energy supplies, is trying to turn west to the U.S. for shale gas. Some EU members have sought to find alternatives to Russian gas, while others have voiced their support for Russia’s South Stream natural gas pipeline, which would connect its supplies to Europe. Covering its bets, Moscow turned east to Beijing, where it struck a deal to build the huge Power of Siberia pipeline that will deliver Russian gas to China.

Prospective EU members like Macedonia and Serbia that want to help build, and benefit from, the South Stream are caught in the crossfire between Putin and the EU. Serbia has directly been told by the Europeans that it can forget about full membership in the EU if it starts work on the pipeline under its current deal with Russia.

Natural gas aside, the EEU has potential to become an economic powerhouse. Russia is geographically the world’s largest country, of course, but Kazakhstan is the ninth-largest and is the size of Western Europe by itself. Belarus is considerably smaller, but it does occupy a strategic spot facing Western Europe.

Notwithstanding his successes so far, Putin still faces obstacles in making the EEU a reality. He had hoped to lure Ukraine, but when the pro-Moscow president, Victor Yanukovich, tried to undo his country’s pending trade pact with the EU, he was driven from office.

While the EEU is expected to be approved and initiated by its prospective members early in the new year, it will take quite a while to pose a real threat to Western energy interests. It could be a decade before unified markets for oil and gas congeal. And Belarus in particular is playing coy with EEU about participation in hopes of getting a better deal on fuel sales to its big brother to the East.

A Whiff of “Soviet”

Although the inspiration appears to be Old Russia and not the Old USSR, there actually would still be a whiff of the old Soviet Union in the EEU. Under Soviet central planning, Armenia supplied machine tools, textiles, and other manufactured goods to sister republics in exchange for raw materials and energy. Kyrgyzstan, though mountainous, depended heavily on exporting foodstuffs to other Soviet republics and would do so again.

So the rough plan goes as follows: Russia provides the raw materials, Kazakhstan and Kyrgyzstan are the food baskets, while Belarus and Armenia are responsible for the manufacturing. Those are, of course, the broader roles, and would not limit any country from participating in other economic activities.

The question remaining is whether Russia’s new iteration of economic strength will be a greater success than its last.