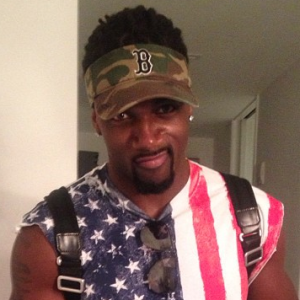 How is the brave new world of online journalism doing? Consider this: The Huffington Post has hired former NFL star Donté Stallworth as a “Reporting Fellow” to cover….National Security.

His experience in the area is limited to tweeting his views on subjects ranging from 9/11 to ISIL. That’s apparently sufficient cred for HuffPo Politics Managing Editor Amanda Terkel, who said there’s been “a national security wonk lurking underneath Donté’s helmet for quite some time, as anyone who follows him on Twitter knows.” And she’s not alone: the website Foreign Policy last year offered him a job (sort of) based on his Twitter stream.

One is that Huffington Post (with which we are friendly enough and where material of ours very occasionally appears) seems to be congenitally unable to resist bringing aboard people whose main credentials are fame, wealth or connections. But, heck—it’s a business, and it needs money and clicks. So whatever.

The second thing is more problematical: Stallworth’s views tend toward what the HuffPo itself might dismiss as “conspiracy theory.” Anything even remotely identifiable along those lines is routinely removed or blocked by HuffPo editors based on the site’s (unpublished) editorial policy. And they don’t do that just for wild imaginings. Even carefully measured and documented work that questions the conventional interpretation of events doesn’t get ink at Huffpo—including deep digs into the illogical parts of the official narrative about the killing of Osama bin Laden, and the many questions surrounding the Boston Marathon bombing, especially the FBI’s relationship with Tamerlan Tsarnaev.

How hypocritical, then, is it for the site to make the NFL dude a National Security Fellow? Consider these 2009 tweets:

NO WAY 9/11 was carried out by “dying” Bin Laden, 19 men who couldn’t fly a damn kite. STILL have NO EVIDENCE Osama was connected, like Iraq

It cannot be ignored that the same year Stallworth was tweeting the above items, he killed a pedestrian while driving drunk. Stallworth was suspended by the NFL, pleaded guilty to manslaughter, was sentenced to just 30 days in jail (he only served 24 of those) and then had to put in 1,000 hours of community service.

Although it’s not clear just what duties a Huffington Post National Security Fellow is expected to perform, Stallworth’s new gig is not part of that community service.

Or is it? Now that would be a conspiracy theory.