Next to man, mosquitoes are the most dangerous creatures on earth, public health officials say. The diseases they spread have killed more people than all the wars in history.

Poisonous spiders and snakes can kill you, but they tend to mind their own business, and it usually doesn’t involve you. Not so with mosquitoes. You are their business.

Mosquitoes are spreading more and more disease in this country—and there’s more of it to spread in the first place. This is partly because of infected people entering the U.S. from places where infectious diseases are flourishing.

An especially dangerous disease to look out for in the coming months is dengue fever, which can be fatal. It is also under-recognized. But, between 2011 and 2012, known cases of dengue increased by 42 percent in the continental U.S.—357 cases up from 251—according to the Centers for Disease Control and Prevention (CDC).  Most occurred in Florida, New York, and California. In that same period, cases in Puerto Rico nearly tripled to 4,450.  (Click here for an updated map of the disease worldwide.)

Dengue has spread from nine countries to more than 100 in 50 years and is an underestimated risk affecting as many as 390 million people, according to this video by the International Federation of the Red Cross summarizing the global scope of the threat:

One aspect of climate chaos—global warming—may contribute to the spread. According to Scientific American:

The increased warming predicted for the southern U.S. along with increased flooding means dengue fever will no doubt be spreading north on the backs of mosquitoes into U.S. states that never thought they would have to deal with such exotic outbreaks.

In the same article, Maria Diuk-Wasser of the Yale School of Public Health explains the connection:

The direct effects of temperature increase are an increase in immature mosquito development, virus development and mosquito biting rates, which increase contact rates (biting) with humans. 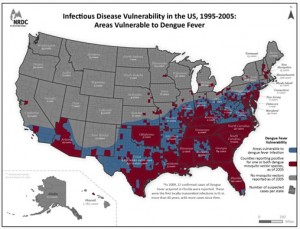 Diagnosing dengue fever is tricky. Some of the symptoms are similar to those of other diseases, such as West Nile Virus.  At first, it can even resemble the flu. But the most characteristic symptoms are high fever and severe pain in bones, the reason the disease is also called “breakbone fever.”  Some cases are mild, while others can advance to the deadly hemorrhagic stage.

All forms of dengue fever are associated with the same four viruses. So, if your neighbor develops only a mild form of the disease, do not assume that you or your children will have the same fate if bitten by the same mosquito. 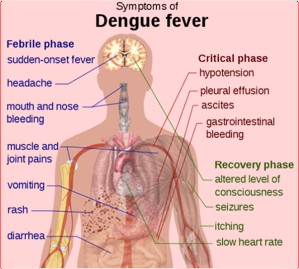 Here is a concise description of the symptoms and progression of the disease, according to the Mayo Clinic:

Many people, especially children and teens, may experience no signs or symptoms during a mild case of dengue fever. When symptoms do occur, they usually begin four to 10 days after the person is bitten by an infected mosquito. Signs and symptoms of dengue fever most commonly include:

Most people recover within a week or so. In some cases, however, symptoms worsen and can become life-threatening. Blood vessels often become damaged and leaky, and the number of clot-forming cells in your bloodstream falls. This can cause:

–   Bleeding from the nose and mouth
–   Severe abdominal pain
–   Persistent vomiting
–   Bleeding under the skin, which may look like bruising
–   Problems with your lungs, liver and heart

There is no limit to the number of swamps or the variety of contraptions people leave around that hold stagnant water—all so perfect for breeding mosquitoes. 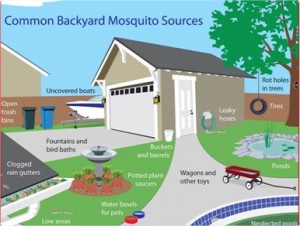 Since mosquitoes are here to stay, it’s best to be prepared. The CDC recommends insect repellents that contain the following: DEET, picaridin, and IR3535. It also notes that “some oil of lemon eucalyptus and para-menthane-diol products provide longer-lasting protection.”  If used with a sunscreen, the CDC says the sunscreen should be applied first.

And keep a thermometer handy.

12 responses to “Coming Soon to a Puddle Near You: Mosquitoes and Dengue Fever”

AI Is Helping Scientists Understand an Ocean’s Worth of Data