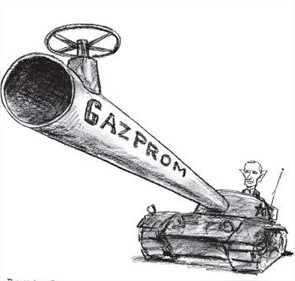 Will Bulgaria be the next testing ground in the escalating confrontation between Putin’s Russia and the West—and why should you care?

The answer may have something to do with gas.

“If the Russians get their way in Ukraine, we will be the next country they will turn their attention to,” said Evgeniy Dainov, a political science and sociology professor at New Bulgarian University in Sofia, Bulgaria’s capital.

He is a staunch critic of the Kremlin who nevertheless refuses to support a Western initiative to wean Bulgaria off Russian energy by letting big American companies such as Chevron “frack” in its most fertile land.

Just like Crimea and the Donbass region of Ukraine, where clashes are currently taking place, Bulgaria has considerable shale gas reserves—and these reserves are near the heart of the East-West dispute.

Bulgaria was once the Soviet Union’s most loyal ally—now it’s a member of the European Union and NATO but it continues to have close economic and cultural ties with Russia. So much so, in fact, that some Europeans worry that having Bulgaria in their midst will prove to be a “Trojan horse” from Russia.

The Bulgarians—along with the rest of Europe, and the West—are nervous about what they view as Russia’s intensifying expansionism: Kremlin influence inevitably follows direct investments and business deals with Russian entities. These can quickly morph into channels of political pressure—as in the 2009 Russia-Ukraine gas dispute, when the Russians cut off the gas to 16 European Union countries. 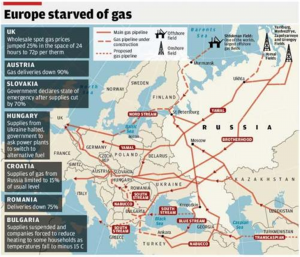 Those Who Can Be Intimidated

A senior fellow and head of the European Council on Foreign Relations’ Bulgarian office, Dimitar Bechev explained to WhoWhatWhy his view on how Russia wields its power:

Those who can be intimidated would include the Bulgarians, for many reasons. One reason: they depend on Russia for 90 percent of their natural gas, and they saw what happened during the Russia-Ukraine gas dispute (see map above). 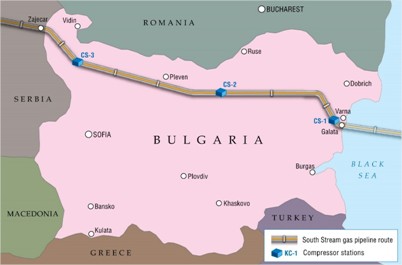 Those Who Can Be Bought

There seems to be no limit to those who can be bought. Though Russia complains about “Nazis” in Ukraine, it has been funding extreme-right movements around Europe, which helps explain why the main ultranationalist party in Bulgaria just threatened to bring down the Sofia government if it approves sanctions against Russia.

“It is obvious that Russia is co-opting people and buying influence—these methods are much more visible in the former Soviet countries, but are also being implemented throughout the Balkans, in Bulgaria as well as in Serbia, Montenegro, Bosnia and elsewhere,” Bechev said.

Russian money has helped produce an odd-fellows alliance between the far right and the left in Bulgaria—though in the case of the Bulgarian Socialist Party, which controls the current coalition government and is also widely perceived as a conduit of Russian influence, there is more than money involved. It is the successor of the former Communist Party, whose graying constituency remembers fondly the old regime.

Western Interference Not Welcome Either

However, it’s not just financial self-interest or a kind of institutional nostalgia that leads Bulgarians to be suspicious of the West and its own brand of neo-liberal expansionist policies. Many Bulgarians have bitter personal memories of Western interference in their affairs in the post-Communist era. Indeed, Western-supported “economic liberalization” focused on the fire sale of state-owned industries contributed to the country’s financial ruin in the 1990s. As an editor for Anthropology News observed:

“Thugs were everywhere. In almost every nice restaurant I visited, there were thick-necked former wrestlers with handguns shoved into the backs of their pants, bodyguards of the new superrich. Rapid economic liberalization created economic growth, but this wealth was concentrated in the hands of a new domestic pack of oligarchs. Western investors had no problem doing business with these robber barons, people who did not innovate or produce, but who bribed and stole their way to wealth. Government regulators were happy to sell off state assets at reduced prices as long as they were given their generous slice of the spoils.”

Then, once the failure of the precipitous “economic liberalization” was clear, the IMF came in 1997 and imposed fiscal austerity on the country—in effect, punishing ordinary Bulgarians for the economic collapse brought on by the previous Western-imposed policy. “Fiscal austerity” involved cutting budget deficits through reduced government spending, which meant, among other things, lower incomes for Bulgarian workers.

“Bulgaria provides stark evidence that an economic strategy based on low wages and labour market flexibility will fail,” the International Trade Union Confederation wrote in a prescient report in 2012. “For more than a decade Bulgaria has been encouraged to pursue such a strategy by both the IMF and the European Union…. The Bulgaria record demonstrates that the draconian labour market reforms being forced on workers in Greece, Portugal, Spain, Italy and other peripheral countries in Europe are misplaced.”

Just a year after the report was published, the failure of this second Western-imposed policy had resulted in daily protest marches in front of Parliament. Sociologists from the Sofia-based polling agency Alpha Research concluded in a report that “Bulgarian society is sliding down the spiral of institutional and political collapse.”

If parts of this story sounds similar to Ukraine’s, it is hardly a coincidence. When Ukraine, mired in financial trouble, applied to the IMF for financial aid last year, the IMF demanded painful austerity reforms, among them an end to fuel subsidies to Ukrainian families. The Ukrainian government refused and turned to Russia, which offered $15 billion with foreign policy strings attached but no demands that would hurt the average Ukrainian. The rest is history. (It bears noting that the new revolutionary government finally forced the subsidy cut through last month.)

It’s no surprise, then, that at a recent pro-Ukraine demonstration in Bulgaria, few people viewed things as black and white. One demonstrator articulated his nuanced frustration this way: “I am here to protest the interference of all foreign powers in Bulgaria, as well as in Ukraine.”