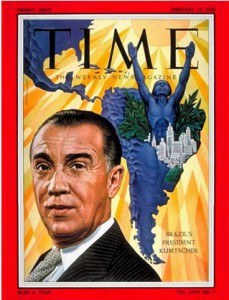 A few weeks ago, we ran a piece criticizing a subtly deceptive article in the New York Times that made light of a wave of exhumations of popular leftist figures in Latin America. Quoting unnamed “scholars,” the paper’s Latin American correspondent Simon Romero suggested the forensic digs

may be the secularized continuation of customs from the time of early Christianity, when a vibrant trade involved the body parts of saints.

That, in fact, is nonsense.  The purportedly “natural”, “accidental”, or “suicide-related” deaths of such important left-leaning figures as Nobel Laureate Pablo Neruda, Brazil’s President Joao Goulart and Chile’s President Salvador Allende all occurred during the rule of various rightist dictators.

The re-examination of evidence in these cases is based therefore on strong skepticism about the “official” narratives of their deaths.  This skepticism, in turn, is based on a well-documented history of thousands of cases of political murder in the region.

Far from looking for relics to sell, investigators are looking for evidence that these deaths were actually assassinations, the work of fearful tyrants anxious to prevent the victims’ return to power.  Now one result is in, and it’s explosive.

Investigators from Brazil’s Truth Commission, looking into the 1976 car crash of former leftist Brazilian president Juscelino Kubitschek and his limo driver, have discovered a bullet fragment lodged in the driver’s skull. This finding, the Commission ruled, along with other evidence, suggests that Kubitschek was murdered—most likely at the behest of the leaders of the CIA-backed military coup that also ousted his successor Joao Goulart. 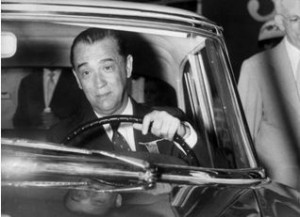 Kubitschek himself at the wheel. (Photo by Antonio Lucio/AE)

What Romero Did Not Report: U.S. Involvement

Romero himself reported this new inquest finding on December 10 in a short article datelined Santiago (“Brazilian Panel Says Ex-Leader Was Murdered”). Romero noted that at the time of Kubitschek’s death, Brazil was ruled by a junta, but as in the case of his earlier article on exhumations, he very significantly chose not to mention the role of the CIA in bringing Brazil’s junta to power.

In his newer, more soberly reported article, Romero nonetheless still failed to mention Operation Condor. That was a coordinated effort by dictatorships in Latin American countries, to track down and kill political opponents in their various countries—an effort that was deliberately aided, particularly during the mid-to-late ‘70s, by the CIA. (See our original piece on this subject for more background.)

The Agency, while perhaps not directing the killings—and which in any case has a history of carefully avoiding a direct evidentiary trail of involvement in covert operations—did enable the building of a crucial database on leftist activists and ousted leaders, and facilitated radio communications among the various countries’ intelligence services.

As Columbia Journalism School professor John Dinges, author of The Condor Years (The New Press, 2004) explains in an interview with WhoWhatWhy,

The CIA in Condor didn’t orchestrate the killing of leaders and activists. They didn’t have to do that; the Latin Americans were doing that on their own. What the CIA did was provide assistance, like computers for maintaining data banks. 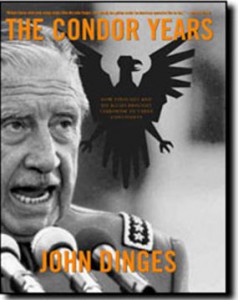 That distinction may not mollify Latin Americans who are looking for the truth about the real roots of democracy’s historic collapse in their countries in the 1970s and 1980s.

Additional untimely deaths in Latin America are likely to be reclassified as political murders in the coming months.

While autopsies are not always definitive, forensic studies are becoming more sophisticated. They’re also becoming more popular in a region where the political pendulum has decisively swung in recent years from right to left, with more left-leaning governments being elected in the region— including in Brazil, Uruguay, Bolivia, Ecuador, Peru, Venezuela, and most recently Chile, where Socialist Michelle Bachelet won a landslide victory in regaining the presidency there.

Those leaders, for obvious reasons, will wants answers to the grim fate of similar leaders who came before them.  Currently, for example, the Argentine Forensic Anthropology Team is working to identify victims of that country’s “dirty war” against leftists.

One case to watch carefully is that of Brazilian President Goulart, whose body was exhumed last month. Goulart, who died in exile in Argentina nine months after a junta overthrew his elected government, was officially reported to have suffered a heart attack. But as his death came at the height of Operation Condor, with dictators aiding each other in eliminating their exiled opponents, there has always been speculation that Goulart had actually been murdered.

A former Uruguayan intelligence officer, himself in trouble on other charges, publicly testified a few years back that Goulart was poisoned by Uruguayan operatives at the request of the Brazilian junta. Tissue samples are being sent to Europe for testing.

What Romero Did Not Report: Amnesty Laws can be Overturned

In his recent article, the Times’s Romero noted that in 1979 Brazil passed an amnesty law, which he said makes any prosecution in these cases impossible.

What he did not report, notably, is that amnesty laws can be overturned—as was done in Chile. This allowed the prosecution of the dictator and coup leader Augusto Pinochet Ugarte and others.  There is a campaign in Brazil to do the same, and the finding that Kubitschek, one of the country’s most celebrated presidents, was murdered, could give it an added boost.

There are 10 comments Our Comment Policy: Keep it civilized, keep it relevant, keep it clear, keep it short. Please do not post links or promotional material. We reserve the right to edit and to delete comments where necessary.