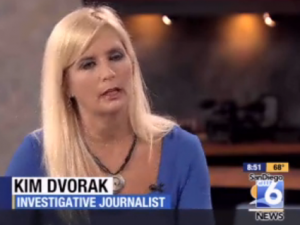 Not true, the family said. They had, in fact, requested the cremation.

Baker tracked the error to Kimberly Dvorak, who has enjoyed a media star turn while reporting the Hastings story for a television station, San Diego 6. Dvorak didn’t want to talk about her goof, so Baker turned to her likely source, a family friend named Joe Biggs. He says Dvorak got the cremation anecdote all wrong—and that he’s still waiting for a correction.

The progressive journal Mother Jones, known to its admirers as Mojo, has now picked up WhoWhatWhy’s reporting thread in a mini-profile of Dvorak, a freelancer whom San Diego 6 identifies as an investigative journalist. Her primary gig seems to be as “national homeland security correspondent” for Examiner.com, the Denver-based web hodgepodge owned by the energy, media and entertainment mogul Philip Anschutz, a longtime funder of right-wing causes.

After noting that “veteran journalist Russ Baker dispelled the myth [of the unauthorized cremation] on his news site WhoWhatWhy,” Mojo’s Gavin Aronsen went on to write that much of Dvorak’s other reporting on the Hastings story has been “just as questionable.”

Her apparent sloppiness didn’t stop Dvorak from pontificating on the abysmal state of the media—presumably including herself in the critique. She implicitly poohpoohed the very process of vetting claims that is what reporting is all about, telling Aronsen, “Journalists are becoming so irrelevant right now.”

There are 91 comments Our Comment Policy: Keep it civilized, keep it relevant, keep it clear, keep it short. Please do not post links or promotional material. We reserve the right to edit and to delete comments where necessary.