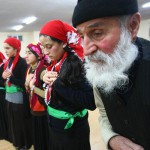 Americans (and others who support the uprising in Syria) frequently assert that President Assad’s co-religionists, the Alawites, have undue power. The reason: they are a minority in Syria.

Here’s one variation, from the New York Times:

Alawites, the president’s sect, dominate Syria, but many orthodox Muslims view them as a heretical offshoot of Shiite Islam.

The notion that only majorities should rule is not new. The implication is that minorities have accrued an unfair advantage because their members work together to help one another stay on top. Critiques about disproportionate Jewish influence are a longtime staple. And if this same principle were applied consistently, articles about the November election might well declare (and perhaps do, abroad):

Mormons, Mitt Romney’s sect, have disproportionate influence, but many orthodox Christians view them as a heretical offshoot of Christianity.

Yet when it comes to Middle East policy, we have the strange situation of Romney, a Mormon; Joe Lieberman, a Jew; and Barack Obama, an African-American, suggesting that a minority clique should not dominate Syria.

They seem to be suggesting that Middle Eastern countries—most of which do not have democratic systems—would at least profit from rule by a tyrannical ethnic majority clique.

In fact, the population of Bahrain, a US ally, is 70 percent Shiite.  But, in a reverse of the situation in Syria, the country is run by elements of a Sunni minority. Nonetheless, we have not heard Romney, Lieberman or Obama call for the Bahraini regime’s ouster.

As with many other purported principles, this “minority clique” concern is raised only selectively— and for reasons having nothing whatsoever to do with ensuring that majorities prevail.

2 responses to “Quick Thought: Alawites and Other Religious Minorities”