Did You Hear About the Shooting? - WhoWhatWhy
Reading Time: 5 minutes 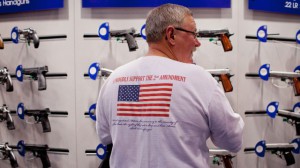 One of the most striking things about shooting incidents in America…is how common they are. Another striking thing is how often the media fails to note the previous point, or to explore what that means—or what might be done about it.

Late last night, a gunman walked into a movie theater in a Denver suburb, killed 12 and injured 50. Two days earlier a gunman opened fire outside a bar in Tuscaloosa, Alabama in an incident in which at least 17 were hurt. These were not really so exceptional. Every year, about 100,000 Americans are victims of gun violence, and every week, people calmly enter our schools, our workplaces, our leisure gathering spots and open fire on innocent bystanders.

Whenever we tweet or post about these, often the only people we hear from are those who say we need more guns not less. “If I had been there with my gun….” The problem, of course, is the public at large is being asked to arm everyone and trust that, while the rest of us cower, “the right people” will quickly dispatch “the wrong people” in the modern equivalent of the Shootout at the OK Corral.  No mention of whether the teacher is supposed to be armed…when a nut walks into a preschool and starts firing away.

Meanwhile, the media doesn’t have any answers at all. Each time such an incident occurs, they primarily evince a morbid interest in the grotesque details of the incident and the psycho of the day. In this case, early indications were that the suspect in custody, James Holmes, said to be a dropout from a medical school, had some kind of imagined association with the film being shown, the Batman movie “The Dark Knight Rises.”

And what is our response to all this? We were told that the president was awakened at 5:25am by his counterterrorism adviser. He then issued the following statement:

“As we do when confronted by moments of darkness and challenge, we must now come together as one American family,” Mr. Obama said. “All of us must have the people of Aurora in our thoughts and prayers as they confront the loss of family, friends and neighbors, and we must stand together with them in the challenging hours and days to come.”

Later, in a press conference, he said: “Such violence, such evil is senseless.”

Romney, in a statement, said:

“Ann and I are deeply saddened by the news of the senseless violence that took the lives of 15 people in Colorado and injured dozens more. We are praying for the families and loved ones of the victims during this time of deep shock and immense grief.  We expect that the person responsible for this terrible crime will be quickly brought to justice.”

That’s about the sum total of leadership these days. Avoid the core issue, pray, and extend sympathies to the families of the victims. No mention of systemic and endemic factors, or of taking action to prevent this kind of tragedy in the future.

In the case of the Tuscaloosa shooter, we had some useful particulars. But sadly, this kind of actionable information is just too “big picture” for us to contemplate:

…There were signs Wilkins’ life was unraveling.

He divorced from his wife of 16 years around 2005 and a credit union last year tried to garnish wages at his then-employer, Capstone Oilfield Services, to collect a more than $15,000 debt but couldn’t because he had declared bankruptcy. And the co-owner of the FedEx store where Wilkins turned himself in said Wilkins talked about being high on drugs during the shootings.

From that, we can see that Wilkins was experiencing stresses and crises. And at least some of them are related to the economic difficulties most of us are facing. And those are caused, at least in some cases, by greed and relentless pressure for profits, irrespective of the harm to others. That is, stresses are not all our fault. The ruthless bottom-line priorities of our society and the lack of protections for consumers and workers are factors in people becoming alienated and enraged. (We wrote a bit about regulating financial excesses the other day—you can read that here.)

Gun violence is also due, in part, to the power of gun manufacturers—which constitute way too big an industry altogether. While it’s surprisingly hard to find accurate totals on firearms production, which in itself is troubling, according to a gun manufacturers’ association, even a decade ago American firms were pumping out more than 3 million combined rifles, shotguns, revolvers and pistols in a single year. And those numbers have been climbing.

That’s a mind-boggling figure. Indeed, we live in a country where firepower, both that held by individuals and by the state, is, frankly, pretty deranged. No other country on earth so bristles with means of killing—and no other country thinks it is quite so healthy an entertainment for us and our children to sit at a console for hours and try to “kill” other people—including civilians. No other country thinks it is moral behavior to use pilotless drones to kill—in large part—people whose only crime is that they’re young men of military age.

We just love our violence—so how surprising is it that violence for fun begets the real thing? Here’s what a witness told CNN affiliate KUSA:

“We were watching a scene of the movie — it was a shootout scene, there were guns firing,” he said. “Then loud bangs came from the right of the theater. Smoke took over the entire theater, and it was really thick and no one could really see anything. Me and my sister were sitting there wondering what was going on. Five people were limping, wounded, slightly bloody.”

Understandably, the violence that pervades our lives just makes us more angry and more dangerous to each other. We are, in short, a sick society on many levels—and we need to do something about it.

That’s a conversation we could be having. But our major media and our elected leaders would have to get it started.

In the meantime, we can talk among ourselves, in a civilized way, about how to become a more peaceable people. Here are a couple of openers:

□ An interesting study in which inexperienced players of violent video games showed more of a need to cleanse themselves afterwards than the veteran gamers. What does this tell us about acclimatization to violence?

□ More information on possible solutions can be found at sites such as the Brady Campaign to Prevent Gun Violence.

87 responses to “Did You Hear About the Shooting?”