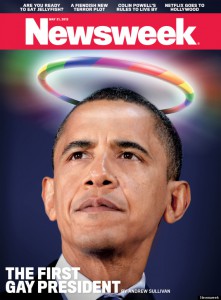 Some time ago, I had intended to write a piece examining Barack Obama’s switch on gay marriage, and the way in which that produced a huge surge in campaign contributions. I was interested in considering how that particular issue edged out many other contemporaneous matters in discussions of Obama, and how it affected the way people felt about him. Since I never did get around to it, I was intrigued to run across this essay on the same topic from the Australian journalist John Pilger.

Here it is, in full. Your comments are encouraged.

Never forget that Bradley Manning, not gay marriage, is the issue
By John Pilger
16 May 2012

In the week Barack Obama received the Nobel Peace Prize in 2009, he ordered bombing attacks on Yemen, killing a reported 63 people, 28 of them children. When Obama recently announced he supported same-sex marriage, American planes had not long blown 14 Afghan civilians to bits. In both cases, the mass murder was barely news. What mattered were the cynical vacuities of a political celebrity, the product of a zeitgeist driven by the forces of consumerism and the media with the aim of diverting the struggle for social and economic justice.

The award of the Nobel Prize to the first black president because he “offered hope” was both absurd and an authentic expression of the lifestyle liberalism that controls much of political debate in the west. Same-sex marriage is one such distraction. No “issue” diverts attention as successfully as this: not the free vote in Parliament on lowering the age of gay consent promoted by the noted libertarian and war criminal Tony Blair: not the cracks in “glass ceilings” that contribute nothing to women’s liberation and merely amplify the demands of bourgeois privilege.

Legal obstacles should not prevent people marrying each other, regardless of gender. But this is a civil and private matter; bourgeois acceptability is not yet a human right. The rights historically associated with marriage are those of property: capitalism itself. Elevating the “right” of marriage above the right to life and real justice is as profane as seeking allies among those who deny life and justice to so many, from Afghanistan to Palestine.

On 9 May, hours before his Damascene declaration on same-sex marriage, Obama sent out messages to campaign donors making his new position clear. He asked for money. In response, according to the Washington Post, his campaign received a “massive surge of contributions”. The following evening, with the news now dominated by his “conversion”, he attended a fundraising party at the Los Angeles home of the actor George Clooney. “Hollywood,” reported the Associated Press, “is home to some of the most high-profile backers of gay marriage, and the 150 donors who are paying $40,000 to attend Clooney’s dinner will no doubt feel invigorated by Obama’s watershed announcement the day before.” The Clooney party is expected to raise a record $15 million for Obama’s re-election and will be followed by “yet another fundraiser in New York sponsored by gay and Latino Obama supporters”.

The width of a cigarette paper separates the Democratic and Republican parties on economic and foreign policies. Both represent the super rich and the impoverishment of a nation from which trillions of tax dollars have been transferred to a permanent war industry and banks that are little more than criminal enterprises. Obama is as reactionary and violent as George W. Bush, and in some ways he is worse. His personal speciality is the use of Hellfire missile-armed drones against defenceless people. Under cover of a partial withdrawal of troops from Afghanistan, he has sent US special forces to 120 countries where death squads are trained. He has revived the old cold war on two fronts: against China in Asia and with a “shield” of missiles aimed at Russia. The first black president has presided over the incarceration and surveillance of greater numbers of black people than were enslaved in 1850. He has prosecuted more whistleblowers – truth-tellers – than any of his predecessors. His vice-president, Joe Biden, a zealous warmonger, has called WikiLeaks editor Julian Assange a “hi-tech terrorist”. Biden has also converted to the cause of gay marriage.

One of America’s true heroes is the gay soldier Bradley Manning, the whistleblower alleged to have provided WikiLeaks with the epic evidence of American carnage in Iraq and Afghanistan. It was the Obama administration that smeared his homosexuality as weird, and it was Obama himself who declared a man convicted of no crime to be guilty.

Who among the fawners and luvvies at Clooney’s Hollywood moneyfest shouted, “Remember Bradley Manning”? To my knowledge, no prominent spokesperson for gay rights has spoken against Obama’s and Biden’s hypocrisy in claiming to support same-sex marriage while terrorising a gay man whose courage should be an inspiration to all, regardless of sexual preference.

Obama’s historic achievement as president of the United States has been to silence the anti-war and social justice movement associated with the Democratic Party. Such deference to an extremism disguised by and embodied in a clever, amoral operator, betrays the rich tradition of popular protest in the US. Perhaps the Occupy movement is said to be in this tradition; perhaps not.

The truth is that what matters to those who aspire to control our lives is not skin pigment or gender, or whether or not we are gay, but the class we serve. The goals are to ensure that we look inward on ourselves, not outward to others and never comprehend the sheer scale of undemocratic power, and to that we collaborate in isolating those who resist. This attrition of criminalising, brutalising and banning protest can too easily turn western democracies into states of fear.
On 12 May, in Sydney, Australia, home of the Gay and Lesbian Mardi Gras, a protest parade in support of gay marriage filled the city centre. The police looked on benignly. It was a showcase of liberalism. Three days later, there was to be a march to commemorate the Nakba (“The Catastrophe’), the day of mourning when Israel expelled Palestinians from their land. A police ban had to be overturned by the Supreme Court.

That is why the people of Greece ought to be our inspiration. By their own painful experience they know their freedom can only be regained by standing up to the German Central Bank, the International Monetary Fund and their own quislings in Athens. People across Latin America have achieved this: the indignados of Bolivia who saw off the water privateers and the Argentinians who told the IMF what to do with their debt. The courage of disobedience was their weapon. Remember Bradley Manning.

11 responses to “Obama, Bradley Manning, and the Politics of Gay Marriage”