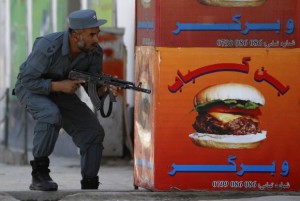 Welcome to “Stay in Afghanistan, Act 14.” Also known as, “What a surprise attack!”

Western military and intelligence officials acknowledged on Monday that they were surprised by the scale and sophistication of the synchronized attacks in Afghanistan on Sunday, seeing it as a troubling step in the evolution of the Haqqani Taliban network from a crime mob to a leading militant force.

For the Haqqani network, a family of border criminals and smugglers that has gained an astonishing notoriety in recent years as a leading killer of allied troops in Afghanistan, the attacks on Sunday represented more than just the ability to paralyze the mostly tightly secured districts of Kabul for hours. They were proof that the Taliban offshoot could create the vast network of logistical support and planning needed to mount terrorist attacks without anything leaking to the intelligence groups so tightly focused on it.

While it is true that it is all but impossible to intercept every terrorist attack, there was not one attack on Sunday, but at least seven — three in Kabul, two in Jalalabad, one in Paktia Province’s capital, Gardez, and another in Logar Province’s capital, Pul-e-Alam. There would have been dozens more people involved than just the assailants who struck on Sunday.

The nearly 40 fighters who took up positions in vacant buildings in strategic locations in the four provinces were the tip of the iceberg, while the bulk of the terrorist activity that made their attacks possible was hidden: the financers, trainers, reconnaissance agents who chose the sites, logistics experts who arranged transport, and the weapons suppliers who provided what they needed for the attack.

So, the US government (along with the Times) is saying that “conspiracies” of at least some types apparently can be pulled off without anyone finding out before the fact. Verrry interesting. Continue, please….

While Afghan officials said they thought that Sunday’s attacks originated in Pakistan, where Haqqani leaders are in hiding, American officials said that unlike in the group’s prior attacks in Afghanistan, Pakistan did not serve as the launching pad. “Though the evidence leads us to believe that the Haqqani network was involved in this, it doesn’t lead back into Pakistan at this time,” Gen. Martin E. Dempsey, the chairman of the Joint Chiefs of Staff, told reporters in Washington.

Of course, Gen. Dempsey is the representative of the body that failed to detect anything going on. So we trust his word about where the evidence points? Also, his insistence that this is a domestic challenge in Afghanistan, not one to be laid to the doorstep of the NATO ally Pakistan, should be viewed with skepticism. The military budget for continued operations in Afghanistan is based on the assumption that the US and its allies are fighting enemies in Afghanistan, not the surrogates of other US allies.

Mr. Karzai laid the blame for the failure to detect the plots at the door of NATO, above all, but members of the Afghan Parliament were more inclined to point fingers at the National Directorate of Security, Afghanistan’s intelligence agency. “There is a big question mark: How did they manage to bring all these weapons and all this ammunition and rockets and keep it here in the vicinity of the sensitive installation of Afghan government and international community?” said Fatima Aziz.

Whoops. So Afghan parliament members suspect their own government was…what? Incompetent? Maybe even complicit in the “successful conspiracy?” Or… let it happen? Dutifully reported by Times with no emphasis on this highly intriguing point—which, if such speculation is just plain wacky, should have been marked as such.

American intelligence officials view the Haqqani network, which operates in Afghanistan and Pakistan, as a strategic asset of Pakistan’s spy agency in the Afghan theater. At the same time, though, the Haqqanis are in league with the Pakistani Taliban, who are fighting the Pakistani Army, highlighting the bewildering web of alliances and plots that spans the border between Afghanistan and Pakistan.

(TimesTranslation Machine: What we mean to say is…heck, what DO we mean to say? There’s an awful lot going on here, and our reporter has really no idea what’s happening or why—or actually suspects something way more nefarious than just more “Taliban Trouble” but we really aren’t going to go there, because, well, we never really go there.)

Let’s face it: the Pakistani army and spy agency benefit substantially from the continued US funding of operations in the area. A tremendous amount of money flows to Pakistan, and plenty of that ends up in the pockets of key military and spy officials. Pakistan was getting $2 billion a year until the US, seeking to penalize it for behavior that is…well….too complicated to explain, “withheld” $800 million last year. So, there’s a big stake in keeping this whole crisis going.

The official policy is that the West is determined to get out of Afghanistan. And, to be sure, that is probably the wish of at least some of the Western leadership, including, most likely, Obama and his inner circle. But not everyone may share that sentiment, as we learned from the competing agendas during Vietnam and other conflicts.

The rest of us (including, it seems, the New York Times) understand virtually nothing about what’s at stake or who is doing what to whom. But one thing is certain: we will be expected to pay for it all.

And, lest we forget (if, in fact, you were paying attention when it was very briefly made public back in 2010), the US military “has discovered” that Afghanistan is sitting on, oh, about a trillion dollars of untapped mineral deposits—so much that Afghanistan could become a world leader in mining. (We wrote about that here.)

The advantage of this surprising attack coming off—and getting our surprised response—is that it is likely to justify more, not less, continued presence of foreign troops and operatives in Afghanistan for the foreseeable future. KACHING!