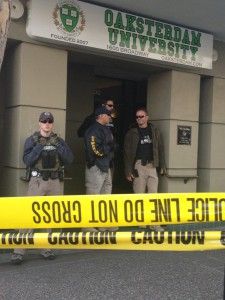 The front page of Tuesday’s Los Angeles Times contains two articles that say a lot about priorities in this country. Those two articles both deal with incidents at universities in the same California city: Oakland.

One reports on the Obama Administration sending federal agents, backed by Oakland police, in raids of facilities associated with Oaksterdam University, an outfit that provides medical cannabis services and related courses.

In the other, a former student with “anger management issues” entered Oikos University, a small Christian school, and mowed down seven people in one of the worst shooting incidents in California history.

The lead article, “Raid on Pot College Stuns Activists,” explains that, as the search warrants are sealed, the reason for the raids are unknown. However, the background centers on interpretations of California law permitting the dispensing of marijuana for purposes of treating illnesses—under certain circumstances. It appears that there is some dispute over whether, under that law or those of other states, it is permissible for those in the cannabis trade to earn a profit.

What is more interesting than the rationale for the raids is the overall strategic decisions being arrived at by the Obama Administration. For, whether or not for-profit medical cannabis operations are justified, they are essentially providing services that the law says serve a legitimate public interest—mitigating the pain and suffering of chronic illness. And they are not “criminal” in any real sense. Richard Lee, the man behind Oaksterdam University and a related dispensary, has been in a wheelchair since a spinal injury in 1990 and uses marijuana to treat muscle spasticity.

Yet Obama has clearly made harassing those serving ill Americans with medical marijuana a law enforcement priority. Since he took office, federal agents have conducted more than 170 raids of medical marijuana operations nationally. And since October, the feds have sent 300 letters to landlords of marijuana dispensaries, threatening them if they do not evict their tenants.

Clearly, this is intended to send a message, but to whom?  If law-abiding providers like Richard Lee are forced out of business, unquestionably public access to medical cannabis treatment will be constrained. And whom does that serve?

One can only think of two beneficiaries of these raids. One is the pharmaceutical industry, which is deeply worried about ways in which natural substances like cannabis could cut into their sales of more conventional cures. Interestingly, the industry has shown interest in cannabis, but on terms that benefit it—seeing huge profits in a market of FDA-approved, by-prescription, cannabinoid medicines. Outfits like Oaksterdam University are competition.

Big Pharma is an important player in elections. During the 2008 election, it dumped $16 million into federal elections, almost evenly split between Republicans and Democrats.  Last year it spent $150 million on lobbying in Washington. Significantly, Obama received almost $1.2 million from the industry in 2008, which is four times what it gave his opponent, John McCain.

To check out the revolving door between the pharmaceutical industry and the Obama administration, go here.  On that page, scroll down to Department of Justice, the lead entity harassing medical marijuana providers. Look at, for example, the first name, Lanny Breuer. He goes in and out of Democratic administrations, having worked in both the Clinton and Obama White Houses, and is currently at the Justice Department, where he is Assistant Attorney General in the Criminal Division. When he is not in government, he works for the lobbying firm of Covington & Burling, where more than half of his business comes from….the pharmaceutical industry. Breuer is just an example—there are plenty more.

The other beneficiary of the raids is Obama’s political image. By authorizing high-profile raids (and we can reasonably assume nothing like this would be undertaken without the president’s approval) the president is staking out the “law and order” ground crucial to victory in November. He can easily sacrifice the votes of those for whom this issue is of paramount importance. They really have no viable alternative candidate. And states such as California will be firmly in the Democratic column no matter what Obama does. But he telegraphs a message of toughness on drugs and crime that will appeal to crucial voters in swing states. To believe that major decisions are not undertaken with an eye to political consequences is to exhibit extraordinary naiveté, especially when they come in the year prior to the presidential election.

By contrast, let’s consider the crux of the issue in the article right next to it: “7 Shot Dead in Oakland Campus Rampage.”   Senseless gun violence, a fair amount of it committed by people with legal weapons, occurs with numbing regularity. Almost every day, it seems, someone shoots up a college, a workplace, a church, a social event. And yet it is just ignored. Although the massive coverage of the Trayvon Martin case has focused principally on racism, the case most certainly is also about guns, because, irrespective of George Zimmerman’s motivations, if he did not have a gun, Trayvon would be alive.

Zimmerman possessed a legal firearm. So did the gunman in Oakland. Yet few public officials, and certainly not Obama, dare take on the power of the NRA or even challenge routine gun-ownership arguments that more guns on the street make us all safer. Those who advocate America’s growing descent into a nation of frontier saloonkeepers and Old West gunslingers are on slippery ground when every day innocent people are mowed down. Yet in a sign that this country is hamstrung about the problem, nothing is being seriously proposed by our government.

Apparently, people would rather let these daily tragedies unfold than abandon the largely illusory sense of personal safety they get by keeping weapons in their homes. Gun advocates like to point to the rare instance in which someone successfully protected their life against an intruder, while ignoring each loss of innocent life.

In fact, in 2009 (the most recent year I could find for such compiled statistics), of 13,636 Americans murdered that year (the vast majority with guns), only 215 were classified by law enforcement as justifiable homicide by private citizens, with just 165 of those being handgun self-defense. That’s about one and a half percent of all gun deaths attributable to handgun owners staving off credible threats. Not very impressive in the self-defense category, or in terms of public safety!

The reality in a country where the ratio of guns to people is about 1:1, is that we all should feel terrified every time we encounter someone with a bad temper, with road rage, anyone who may think we looked at them in the wrong way or that we trespassed (however accidentally) on their property.

The idea that bad guys will think twice if they know everyone around them is armed is patently nonsensical in the case of deranged shooters like the Oakland gunman. And does anyone think there will be fewer victims if shooters get into gun battles with armed citizens in schoolrooms, bars or churches?

Yet nothing gets done. The Obama administration does not have the political will to tackle the issue—and no wonder.  Things are so out of whack that the best the Administration can do is to require gun store owners in Southwest border states to merely report when customers buy multiple high-powered rifles—within five days of the purchase. It’s a wonder they didn’t add, “when the purchaser is over 90 years old.”  No matter—the firearms industry predictably opposed this toothless measure.

The “Oakland Paradox,” in which the government clamps down on a legitimate medical use for marijuana while skirting a serious life-or-death issue, offers a perfect opportunity for America to have a candid conversation about common sense and political corruption—and getting it right about what is good for us, and what isn’t.

A president in a tight re-election campaign isn’t likely to lead such a discussion. But the rest of us can push for one to begin.

54 responses to “The Oakland Paradox: Obama, Weed and Guns”