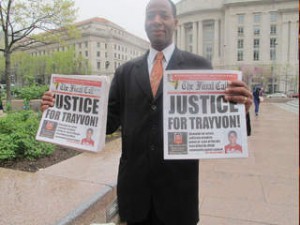 When tragedy strikes, how does one tactfully suggest we’re wallowing in it too much?

I don’t know any dignified way to say this, but the reality is that we all—and the media in particular—are spending far too much of our limited bandwidth on the Trayvon Martin shooting.

To be sure, it is a sad tale of avoidable death and of the racial chasm in this country, made especially poignant by the youth of the victim. The authorities’ failure to arrest the killer seems outrageous. But how will this one case, by almost completely consuming the media’s entire capacity—as well as our own limited free time for public affairs activism and discussion—achieve anything meaningful?

When any important principle plays out in the form of a lively and compelling drama, we are all drawn in. But should drama and human narrative be the driving force in our discourse?

Of course, there’s inherent value in talking about societal problems, and making our voices heard. The problem with the Trayvon Martin saga is that it’s hard to see what concrete changes will emerge as a result of its domination of the public square.

With all the media hours spent parsing details, like who said or did what, when, and with what motive, it evokes other compelling whodunits dating back to the OJ case and beyond. These stories are cathartic in that they offer us a chance to express our opinions, to follow a narrative as a shared audience experience, to protest an injustice.

But once we’ve done that, what then? What is the consequence of our appetite—either fed by or created by the media—for one tabloid drama and morality tale after another?

While the vast majority of our bandwidth is devoted to these mini epics, everything else gets short shrift. Everything. Because, as those of us in the media are so often reminded, the public has trouble focusing on more than one story or one issue at a time. So that means that every week we have a Trayvon Martin/George Zimmerman affair, or a Tyler Clementi/ Dharun Ravi controversy, or even a Rush Limbaugh/Bill Maher brouhaha, we’re unable to focus on things like the constant loss of civil liberties for all, the growing crisis for life on earth, and the destruction of democracy by corporate capital.

Big, complex issues are a challenge for the media to cover and for the rest of us to grapple with. A compelling narrative, complete with pathos and vivid characters, whether sympathetic or loathesome, is, on the other hand, a no-brainer. Easy to get involved with, easy to care about. And all too easy to put aside when a new compelling story takes its place.

But with so many truly pressing issues, the endless parade of no-brainers is becoming more and more of a serious problem. And what is lost in the Trayvon Martin case is that this particular situation—in which an innocent person was shot by a member of a Neighborhood Watch program—is actually quite rare.

With these fundamentally anecdotal and not fully representative public controversies, at least if we could identify a concrete objective and make some progress, that would be different.

Perhaps the tragedy of young Trayvon’s death could result in new laws about gun ownership or the responsibilities of those who use them. But how likely, really, is any kind of serious challenge to the gun lobby as a result? Pretty slim, I’d say, considering that the near-daily toll of innocent victims of gun violence have not loosened the death grip of the NRA on our political system. More likely—though still not that likely—is alteration of the so-called “Stand Your Ground” laws around the country that loosen the standards for what constitutes self-defense shooting.

As we go about participating in each “debate of the week,” let’s pause to think about what we do and don’t accomplish as a result—and what else is getting squeezed out of consideration in the public arena. Far more of our public conversation, for example, will have been devoted to the death of one innocent person than, say, to avoiding all-out war with Iran, with its risk to the lives of untold thousands or even millions of innocent people.