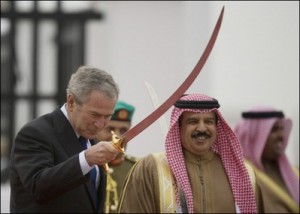 Suddenly, the “Saudi-9/11 connection” is on the table for the media. But it certainly wasn’t, for the longest time.

Our story about apparent Saudi royal ties to the 9/11 hijackers caused a minor sensation via social media sharing when it came out in September, 2011, but was resolutely ignored by virtually all news organizations, including the vaunted online “alternative media.” Not surprisingly, the traditional corporate-owned mainstream media (MSM) managed to ignore the massive revelations—even though they were documented in exactly the same manner that the traditional media uses, and they were on a topic of tremendous importance and public interest.

We know they ignored it because we know them, and we sent it to them. And we heard that it would be and was being ignored. They were only willing to do maudlin, “human interest” stories for the 10th anniversary of this monumental and still-mysterious event.

Now, however, the MSM has suddenly found a “safe” way into the dark underbelly: Let officials’ statements pave the route. Here’s the New York Times:

For more than a decade, questions have lingered about the possible role of the Saudi government in the attacks on Sept. 11, 2001, even as the royal kingdom has made itself a crucial counterterrorism partner in the eyes of American diplomats.

Now, in sworn statements that seem likely to reignite the debate, two former senators who were privy to top secret information on the Saudis’ activities say they believe that the Saudi government might have played a direct role in the terrorist attacks.

“I am convinced that there was a direct line between at least some of the terrorists who carried out the September 11th attacks and the government of Saudi Arabia,” former Senator Bob Graham, Democrat of Florida, said in an affidavit filed as part of a lawsuit brought against the Saudi government and dozens of institutions in the country by families of Sept. 11 victims and others. Mr. Graham led a joint 2002 Congressional inquiry into the attacks.

His former Senate colleague, Bob Kerrey of Nebraska, a Democrat who served on the separate 9/11 Commission, said in a sworn affidavit of his own in the case that “significant questions remain unanswered” about the role of Saudi institutions. “Evidence relating to the plausible involvement of possible Saudi government agents in the September 11th attacks has never been fully pursued,” Mr. Kerrey said.

Their affidavits, which were filed on Friday and have not previously been disclosed, are part of a multibillion-dollar lawsuit that has wound its way through federal courts since 2002. An appellate court, reversing an earlier decision, said in November that foreign nations were not immune to lawsuits under certain terrorism claims, clearing the way for parts of the Saudi case to be reheard in United States District Court in Manhattan.

This article begins by asserting that “For more than a decade, questions have lingered about the possible role of the Saudi government in the attacks on Sept. 11, 2001.” Where have they lingered? They have lingered on the Internet, while being essentially ignored by virtually all of the so-called legitimate media.

So, conventional media, don’t start acting like you were dealing with this for all that time. Don’t pretend that you have shown the slightest interest in a house in Florida tied by visits or calls to many of the people we’re told were the hijackers on Sept 11. Don’t pretend that you have been curious about the fact that the owner of that house worked directly for one of the most powerful Saudi princes. Don’t pretend you’ve shown any curiosity toward an apparently effective US government effort to block further inquiries into this extraordinarily interesting and consequential development. (If you are curious, we’d urge you to read the story, here.)

It’s great to find the kind of “news peg” that cautious editors are comfortable with—esteemed former senators, a “multibillion-dollar lawsuit,” an “appellate court.” But where’s the enterprise, where’s the guts?

Stay tuned for these same news organizations to eventually “discover” the very same material the Miami Herald, Broward Bulldog and WhoWhatWhy put together—of course, without giving proper credit, something they are loathe to do. That’s because this would  legitimize and draw attention to competing brands that…gasp…in some ways do the work much better than they.

This episode is so, so telling about why we need a whole new, much bolder, and much more independent, media to address the reality of a changing and ever more perilous world.