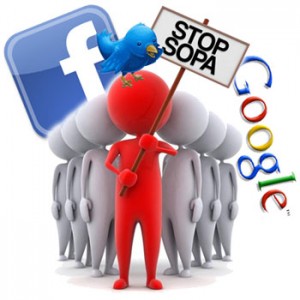 It’s exciting to see how a coordinated Web blackout this Wednesday got members of Congress to reverse themselves so quickly—and do the right thing. By the end of the day, the number of Senators publicly opposing PIPA (the anti-piracy legislation that threatens free speech) jumped to 35 from five the week before. By the time you read this, those numbers may have jumped again. I wouldn’t be totally surprised if, with the tidal wave of public anger, we see 100 senators scrambling to get on the bandwagon. (Well, probably not 100, but a lot.)

However, it’s important to remember that, no matter how many citizens expressed themselves on PIPA (or the House version, SOPA), it was corporations partially driving this—in competition with other corporations. Basically, it is a battle between companies that create original content (especially movie and music makers) and those who derive their living from providing communications platforms where pretty much anything goes, including “borrowing” imagery, film clips, songs and more from their owners and creators for the purposes of a vibrant dialogue.

Putting aside the complicated pros and cons of the issue, in which both sides have legitimate concerns, and the overriding conclusion that the legislation could cast a severe pall over free discourse and Internet innovation, there is another matter to consider.

Namely this: What would it take for a public movement to get a similar response from elected officials,  when billion-dollar interests were not lined up on the same side? Twitter, Reddit, Google, BoingBoing, Tumblr, TGWTG, etc. may be cool, but they’re giant, or at least popular, for-profit enterprises with agendas of their own. Wikipedia and Mozilla are huge, albeit nonprofit, commercial-type enterprises with major brands to promote and protect. All of these and more were on the “free speech” side of this battle. And their role, up front and center, was indispensable in driving home the point, and making congress- members squeal.

As soon as the blackout went into effect, and these outfits got their users to begin a massive and immediate campaign of petitions, emails, and calls, elected officials reversed themselves faster than you can say “one term.”

But suppose the free-speech forces had to make their case without a turbocharging from interested parties? How would we get some other onerous piece of legislation blocked when there was no strong financial incentive for deep-pocketed corporations with slick marketing/publicity arms to mobilize?

For example, what about the NDAA (National Defense Authorization Act), with its onerous and vague provisions that could, under certain circumstances, potentially allow for the indefinite detention without charge of American citizens accused of connections with terrorist groups? Despite a public uproar, Congress went ahead and passed that bill. (Obama signed it, but in a “signing statement” said that his administration would not sanction indefinite detention of citizens – a proviso that offers no restraint on future administrations.)

The point is this: indefinite detention of citizens, even the remote threat of it, is surely as important a threat to our liberties as legislation that curtails our freedom to use copyrighted material on the Internet. Yet what corporations were troubled enough to join the ACLU and other liberties groups in opposing NDAA?

Before we get too self-satisfied over the SOPA/PIPA victory, we need to take a long, hard look at our increasing alliance with all manner of corporate entities to advance our own interests. We should ask ourselves: If we don’t believe that corporations should be treated as persons, why do we need to work with them as if they are? And how can we the people join together to attain political goals without an 800-pound corporate gorilla in our corner?

4 responses to “So Pa, So Good…But Must Activists Always Align With Corporations to Win?”