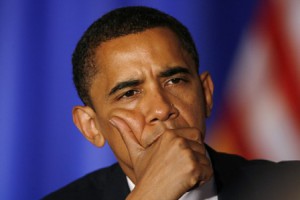 As I noted the other day, Obama is increasingly isolated—and increasingly making some very bad choices of company. His current best friend is the US chief of UBS, one of the most offensive banks imaginable. So while he’s on the stump saying how he relates to Occupy Wall Street, he’s got this Wall Street slickster occupying the presidential hot tub.

The essence of Obama is to make gestures that will please everyone, but to do it without genuine enthusiasm or pleasure—and therefore please no one. Ordinary people feel he cares not a whit about them, and the moneyed class resents his occasional populist-firebrand rhetoric. It is a mark of cynicism to operate like this. It is also not necessarily a winning formula for a politician. And for a country, it is a disaster.

If Obama wants to inspire, he has to pick sides. And that’s not so hard to justify when one side constitutes almost everybody, and the other maybe one percent of one percent.

Now, to be sure, taking on the big boys is full of risks. We write about those at WhoWhatWhy all the time—including here and here.  Presidents who buck the established order face great peril.

But when you do choose to take that position, you can’t just do it kinda sorta, when poll numbers demand action. You’ve got to hunker down, figure out who your real friends are, get protection (literal and figurative) and go for it. That is, if you have it in you to do so. Ron Paul’s growing popularity, and bursts of interest in figures like Gingrich and Bachmann and Cain (before gaffes, deficiencies and attack ads cut them down to size) shows that perceived gumption goes a long way with the public.

Obama, on the other hand, most decidedly does not tend to “go for it.” (His lack of a cooperative Congress is no excuse, since leadership by example can on its own make things happen.)

To be sure, he has installed administrators throughout the government whose inclinations are to actually carry out the mandate of their agencies (gasp!)—on the environment, education, consumer protection, workers, and more. In that sense, at least, he is the polar opposite of George W. Bush.

But on the things that really matter to the elite of the elite within the One Percent, he is nowhere. Nobody has gone to jail for the picking of the American pocket by the banksters; no one has even been indicted.

Now, if none of the actions that led to the Great Recession constitutes a crime, then the president should be pointing that out and talking about tough new laws. (The wealthy have always understood that as long as you control the law, nothing you do can get you in too much trouble.)

As we have noted, Obama failed to take action to directly help homeowners, even as some regional Federal Reserve (!) economists were urging him to do exactly that. Meanwhile, he gave the bankers, the hospitals, the insurance industry, the military contractors, pretty much whatever they wanted.

The illegal wars, torture and other crimes and shames perpetrated by the Bush administration have gone unprosecuted and generally unacknowledged by the administration.

Obama occasionally alludes to the rot in the hearts of so many people at the highest levels of the financial system, but does nothing about it. And as I pointed out in the UBS banker piece, turning one of the worst exemplars of that system’s corrupt tendencies into one of his closest friends represents either a reckless blindness to the messages he is sending, or a deliberate thumbing of his nose.

But why should people be surprised by Obama? The system only lets “system types” thrive and get to the top. The only system types who shake things up are those who derive the confidence to do so from their own privileged background, like FDR and JFK. Obama himself was merely the representative of the fact that certain “acceptable” people of mixed race with proper demeanor and “credentials” would now be welcomed to the feast if they behaved properly. He never really established a track record of leadership or boldness prior to running for president. People just fell in love with their projection of what “Yes we can” meant.

But what matters now is what comes next. What matters is whether he will be re-elected, and if so, whether as a lame duck with “nothing to lose” he will do what 99% of the country longs for him to do: take aim at the core corruption and greedy self-dealing that is destroying America.

Obviously, to stay in the game, he must to some degree play the game the way it is being played. But he can howl hard about how unhappy he is with it. And he can speak directly about ways in which as a second-termer he is going to lead the charge in fundamentally challenging the corruption.

More and more, it seems Obama’s message is, “Yes, I’m In a Can”.  That’s not very inspiring. And it’s not going to get him—or us—where we need to go.