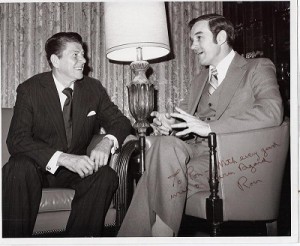 Ron Reagan did well with the evangelicals—will Ron Paul?

It’s the oldest trick in the book. Profess religiosity, get a ton of votes.

Has anyone become president in years without proving his religious bent? Jimmy Carter was the first “born again” president—and his profession of faith certainly helped him win in 1976, though it did not rally enough troops for him in 1980. He lost to Ronald Reagan, who made a big deal out of his own supposed (but dubious) religious devotion, which got him the backing of the then-powerful Moral Majority. And then, of course, there was the “born again” George W. Bush. Others, including Clinton and Obama, have done what they had to do in that regard.

Now we get to Ron Paul. A lot of people like him because he talks straight on a number of issues others won’t touch. But is he a man who shuns opportunity? Consider this: one of Paul’s senior advisers is faith outreach specialist Doug Wead.

Readers of my history of the Bush dynasty, Family of Secrets, know that I interviewed Wead extensively and devoted an entire chapter to him. Wead, a former Pentecostal minister, has been advising politicians for years on what they must do to appeal to self-identified Christian voters. He advised George H.W. Bush, but couldn’t get the Sunday churchgoer to remake himself in a way that would suffice for evangelicals. According to Wead, though, a very young George W. Bush saw the embrace of fervent religiosity as his professional salvation. As I wrote in Family of Secrets:

Inge Honneus, the woman Bush pursued when he was in the National Guard, recalled how W. felt free to discuss all manner of topics with her since she was so far out of his normal circle. “We talked about religion,” she said, and “he thought it was a joke. And when he started going and running for president, and trying to get the religious votes, I’m thinking, ‘What a hypocrite.’ I don’t know if he all of a sudden turned religious. But the core of him was not a very nice man.” Nice man or not, one thing is certain: with his entry into Bible study, Bush was reinventing himself.

It was a politically savvy idea, but, in truth, it was not his own. It appears that it was neither W.’s Midland friends nor the Reverend Billy Graham who helped him see the light. It was Doug Wead, marketing man. …

Family of Secrets goes on to document how Wead coached the Bushes on ways to connect with the huge fundamentalist voting bloc, and how, while this made the elder George Bush squirm, the younger namesake became an enthusiastic student. Wead told me about this response from the mid-eighties, around the time that George W. Bush supposedly suddenly saw the light:

I hadn’t met W. yet, but he knew me because he was getting all these memos, and he was basically saying, ‘Dad, this is right. This is what people in Midland think. My born-again friends say this. He’s right.’ “When I finally met W., [he said] ‘I’ve read all of your stuff—it’s great stuff.’ He said, ‘We’re going to get this thing going.’ ”

Now, it is Ron Paul’s turn. Frederick Clarkson, writing on the website Talk To Action, analyzes  Paul’s challenge in reconciling his dominant Libertarian support base with fundamentalist voters, who play a crucial role in early GOP electoral battlegrounds like Iowa.

…Ron Paul seeks to reinvent his public persona to better or at least differently reflect how his religious views relate to his politics. Indeed, he seems to be making it a central part of his effort to break out beyond his famous hard core of supporters that number under ten percent in most polls.

Paul explained how his beliefs in limited government and even his opposition to the Federal Reserve had their foundations in scripture, combined with his study of the Constitution. Before he left to take the stage that night in November, Paul smiled and said to Wead, who told this story to Yahoo News, “You know, the libertarians are just baffled by me. They didn’t think it was possible for someone to come this direction. A person of faith.”

In stark contrast to how he campaigned four years ago, Paul has made a concerted push during this presidential campaign to emphasize how religion has shaped his policy ideas. Through public addresses, campaign advertisements and conversations with voters, Paul has engaged in an intentional effort to articulate the biblical roots of his philosophy. These efforts are most on display here in Iowa, where most Republican caucusgoers align themselves with socially conservative views, and where Paul is building what has become a robust organizational machine to connect with them. Paul has surged into second place in Iowa, according to several recent polls. The Real Clear Politics polling average for the state has Paul tied with Mitt Romney at 17 percent, behind Newt Gingrich’s 30 percent.

Of interest is this, from a Washington Post article in October:

…the libertarian-minded lawmaker is actually very religious. He’s not a member, but officials at First Baptist Church of Lake Jackson, Texas say Paul attends services whenever he’s in town. He left the Episcopalian church in which he was raised in part over its stance on abortion rights.

That’s an interesting stand for a Libertarian—leaving his church because it supported a woman’s right to choose.

Actually, Paul, whose supporters love the fact that he doesn’t pull his punches, was considerably more sly on this matter. Here’s an excerpt from a lengthy interview with Christianity Today:

In that interview, Paul managed to avoid stating explicitly why he, as opposed to family members, left the Episcopal Church. And the interviewer failed to do her job by nailing him down on it.

Religion is one of those areas that are considered beyond question in the political realm: a candidate’s claims about his faith are taken at face value. But make no mistake: there’s a great advantage to be gained in painting oneself as “holier than” one’s opponents.

Makes you wonder what happened to America that it is no longer possible to elect politicians like Lincoln, who is reported to have said:

When I do good, I feel good. When I do bad, I feel bad. And that’s my religion.

14 responses to “Ron Paul and God”