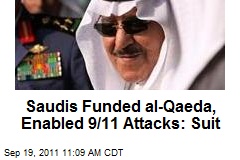 You may recall WhoWhatWhy’s recent investigation of apparent connections between Saudi royalty and the alleged 9/11 hijackers. In it, we mentioned that the insurance giant Lloyd’s of London had sued powerful Saudi interests, alleging culpability for the 2001 attacks–then abruptly withdrew its suit.

Lloyd’s didn’t provide a proper explanation of what had prompted it to withdraw the suit, though, presumably, there’s some behind-the-scenes interaction with those named, perhaps even a settlement. That leaves the rest of us in the dark.

The text of Lloyds’ lengthy original court filing may be found here. And we’ll be back soon with our own commentary—pointing you to the most significant nuggets.