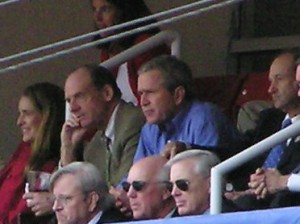 What is the significance of baseball, besides being an enjoyable escape for most of us? Well, for one thing, it’s a classic method of diverting and distracting Americans from other things going on—like Occupy Wall Street. Most of us have very little free time outside of essential and pressing work, family, health matters and such. So how do we spend that free time? Do we read books and learn how the world really works? Do we go out and participate in demanding our rights? Or do we channel our energies, our hopes, frustrations, aggressions, etc, into sports teams that despite the “we” rhetoric really don’t “represent” us in any meaningful way?

We may not understand this, but the One Percent surely do. Need proof? Let’s look at the competing teams in the World Series. One, the Texas Rangers, gave George W. Bush the public platform to appear a “successful businessman,” provide him with a personal fortune, and pave the way for an unsuccessful and hardly accomplished fellow to become Governor and then President.

Ok, you say, but the Rangers lost to the St. Louis Cardinals. (And a lot of people were apparently rooting for the Cardinals because that team was not associated with Bush.)

But guess what: it was. If you watched the after-game ceremony, you saw the team’s owner, William O. DeWitt Jr. And who is he? A close friend of the Bush family who bailed out a failing George W. Bush when his Arbusto oil company was about to go belly up.

As I reported in my book, Family of Secrets:

For about eighty-six million dollars, Bush and seventy investors bought the team. Among the investors were William O. DeWitt Jr. and Mercer Reynolds III, the fellows who had bailed out W.’s Arbusto Energy. This new deal was certainly a natural for DeWitt, who grew up around baseball and whose father served as general manager of the Detroit Tigers and later owned the Cincinnati Reds.

What the book neglected to mention (sorry!) was that DeWitt had become the owner of the Cardinals. DeWitt led an investor group that bought the Cardinals in 1995. When Bush became president, he appointed DeWitt, who publicly at least has no intelligence background, as a member of the President’s Foreign Intelligence Advisory Board. Do with that what you will….

These guys enjoy baseball like the rest of us. But make no mistake: they understand the crucial role of “bread and circuses” in keeping the public eye off the trough. Again, from Family of Secrets:

The Bushes and their friends had ownership stakes in a lot of teams—the Reds, the Mets, the Tigers, and other favorites. It all started with W.’s great-grandfather George Herbert “Bert” Walker, who was a force behind professional golf’s Walker Cup and, in fact, the introduction of golf itself into America. He was also a prominent booster of the New York Yacht Club, professional tennis, and premier horse racing. This family legacy culminated in George W. Bush’s successful effort at capturing a new constituency known as the NASCAR voter. Of course, being associated with sports offers obvious benefits in terms of pleasure and ego, but there is little question that the Bush group was adept at leveraging yet one more beloved American institution.

The consolidated ownership of our sporting institutions, a perfect illustration of the power of the “one percent,” deserves much more journalistic scrutiny.

Sometimes, sports is just fun. And sometimes, viewed with some distance, it is dead serious business.