We might begin by asking the question: Who provided The New Yorker with its exclusive, and what was their agenda in doing so? To try and sort out Schmidle’s sources, I read through the piece carefully several times.

One person who spoke to the reporter, and who is identified by name is John O. Brennan, Obama’s counterterrorism adviser. Brennan is quoted directly, briefly, near the top, describing to Schmidle pre-raid debate over whether such an operation would be a success or failure:

John Brennan, Obama’s counterterrorism adviser, told me that the President’s advisers began an “interrogation of the data, to see if, by that interrogation, you’re going to disprove the theory that bin Laden was there.” 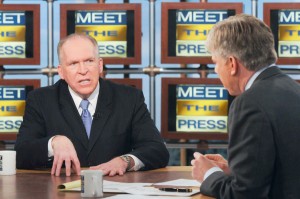 The mere fact of Schmidle’s reliance on Brennan at all should send up a flare for the cautious reader. After all, that’s the very same Brennan who was the principal source of incorrect details in the hours and days after the raid. These included the claim that the SEALs encountered substantial armed resistance, not least from bin Laden himself; that it took them an astounding 40 minutes to get to bin Laden, and that the White House got to hear the soldiers’ conversations in real time.

Half an hour had passed on the ground, but the American commandos raiding Osama bin Laden’s Pakistani hideaway had yet to find their long-sought target.

…The commandos swept methodically through the compound’s main building, clearing one room and then another as they made their way to the upper floors where they expected to find bin Laden. As they did so, Obama administration officials in the White House Situation Room listened to the SEAL team’s conversations over secure lines.

“The minutes passed like days,” said John O. Brennan, the administration’s chief counterterrorism adviser. “It was probably one of the most anxiety-filled periods of time, I think, in the lives of the people who were assembled.”

Finally, shortly before 2 a.m. in Pakistan, the commandos burst into an upstairs room.Inside, an armed bin Laden took cover behind a woman, Brennan said. With a burst of gunfire, one of the longest and costliest manhunts in modern history was over.

.. The commandos moved inside, and finally reached bin Laden’s upstairs living quarters after nearly 40 minutes on the ground. 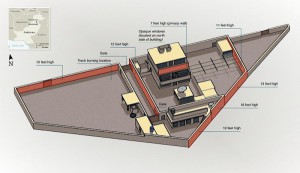 For another take, consider this account from NBC News’ Pentagon correspondent—also reported the week after the raid— two days after Brennan told the Washington Post a completely different story. This one appears to be based on a briefing from military officials who would have been likely to have good knowledge of the operational details:

According to the officials’ account, as the first SEAL team moved into the compound, they took small-arms fire from the guest house in the compound. The SEALs returned fire, killing bin Laden’s courier and the courier’s wife, who died in the crossfire. It was the only time the SEALs were shot at.

The second SEAL team entered the first floor of the main residence and could see a man standing in the dark with one hand behind his back. Fearing he was hiding a weapon, the SEALs shot and killed the lone man, who turned out to be unarmed.

As the U.S. commandos moved through the house, they found several stashes of weapons and barricades, as if the residents were prepared for a violent and lengthy standoff — which never materialized.

The SEALs then made their way up a staircase, where they ran into one of bin Laden’s sons. The Americans immediately shot and killed the 19-year-old son, who was also unarmed, according to the officials.

Hearing the shots, bin Laden peered over the railing from the floor above. The SEALs fired but missed bin Laden, who ducked back into his bedroom. As the SEALs stormed up the stairs, two young girls ran from the room.

One SEAL scooped them up and carried them out of harm’s way. The other two commandos stormed into bin Laden’s bedroom. One of bin Laden’s wives rushed toward the Navy SEAL, who shot her in the leg.

Then, without hesitation, the same commando turned his gun on bin Laden, standing in what appeared to be pajamas, and fired two quick shots, one to the chest and one to the head. Although there were weapons in that bedroom, bin Laden was also unarmed when he was shot.

Instead of a chaotic firefight, the U.S. officials said, the American commando assault was a precision operation, with SEALs moving carefully through the compound, room to room, floor to floor.

In fact, most of the operation was spent in what the military calls “exploiting the site,” gathering up the computers, hard drives, cellphones and files that could provide valuable intelligence on al-Qaida operatives and potential operations worldwide.

The U.S. officials describing the operation said the SEALs carefully gathered up 22 women and children to ensure they were not harmed. Some of the women were put in “flexi-cuffs” the plastic straps used to bind someone’s hands at the wrists, and left them for Pakistani security forces to discover.

Given that Brennan’s initial version of the raid was strikingly erroneous, his later account to The New Yorker is suspect as well. So who else besides Brennan might have been Schmidle’s sources? At one point in his piece, he cites an unnamed counterterrorism official:

A senior counterterrorism official who visited the JSOC redoubt described it as an enclave of unusual secrecy and discretion. “Everything they were working on was closely held,” the official said.

Later, that same unnamed counterterrorism official is again cited, this time seeming to continue Brennan’s narrative of the meeting before the raid, in which participants disagreed on the likely success of such a mission:

That day in Washington, Panetta convened more than a dozen senior C.I.A. officials and analysts for a final preparatory meeting. Panetta asked the participants, one by one, to declare how confident they were that bin Laden was inside the Abbottabad compound. The counterterrorism official told me that the percentages “ranged from forty per cent to ninety or ninety-five per cent,” and added, “This was a circumstantial case.”

From the story’s construction, one could reasonably conclude that the unnamed counterterrorism official is indeed still just Brennan. If not, who could it be? How many different white House counterterrorism officials would have debriefed the SEALs, if indeed that is even their role? How many would have been privy to that planning meeting? And how many different officials would have gotten authorization to sum up the events of that important day for this New Yorker writer? Also, it’s an old journalistic trick to quote the same source, on and off the record— thereby giving the source extra cover when discussing particularly delicate matters.

So, we don’t know whether the article was based on anything more than Brennan, under marching orders to clean up the conflicting accounts he originally put out.

207 responses to “Doubts On “Official Story” of Bin Laden Killing”