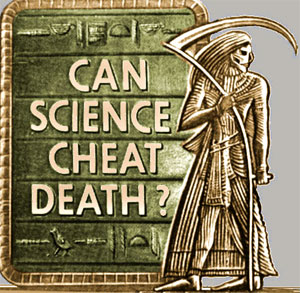 I’m no scientist. I don’t even play one on tv. But I do know an intriguing report when I see one.

Such is the following, from David Gems, a British biogerontologist and Deputy Director of the Institute of Healthy Ageing at University College London.

In an article for the magazine American Scientist, Gems notes that as the global population ages, we are likely to see a growing percentage of humanity living long enough to be afflicted with illnesses related to old age. He then raises the question:

Should we attack the underlying cause of this suffering? Should we try to “cure” aging?

…the prospect of treating aging is extraordinary in terms of the potential impact on the human condition. So, would it be ethical to try to treat it?

Gems says it may indeed be possible to “treat” aging. He knows because he’s personally involved with cutting edge research in the area.

…It is possible to slow aging in laboratory animals. In fact, it is easy. Work in my own lab focuses on the tiny nematode worm Caenorhabditis elegans, which is widely used in genetic studies. Even under optimal culture conditions, these creatures age and die within two to three weeks. In the early 1980s the American geneticist Michael Klass first discovered that by altering their genes, one can slow aging in C. elegans. The result is that the worms live much longer and they remain youthful and healthy longer. The current record for enhancing C. elegans longevity is an astonishing tenfold increase in lifespan, produced by a group at the University of Arkansas. It has now been shown that genes that influence aging in the worms also influence aging in mammals (in mice, to be precise). Humans also carry these genes.

He floats several theories on what causes aging. (You might say “going to the office” or “having kids”, but Dr. Gems is a bit more precise):

…One theory attributes it to an accumulation of molecular damage. Another points to excess biosynthesis; many genes and pathways that influence aging are associated with control of biosynthesis and growth. Yet the truth remains unclear.

Gems notes that restricting caloric intake makes a huge difference in the lifespan of mammals.I can attest to this. One friend, in her mid-nineties and still quite vigorous and vital, eats almost nothing at all, maybe a boiled potato—though she does like a gin-and-tonic in the evening.

One aim of aging research is to develop drugs that can reproduce the effects of dietary restriction and also of genetic alterations that slow aging…. The ultimate goal would be a pill that one could take regularly from midlife onward. This pill would theoretically slow aging with minimal side effects. Its predicted impact would be to reduce the incidence of aging-related disease at all ages—although not to remove them altogether. This would lengthen good health later into life and extend our lifespan—possibly without expanding periods of disability and dependency.

Gems considers the medical specializations that treat the diseases of aging, from Alzheimer’s to macular degeneration (vision deterioration) and the advances in these areas.

…Yet in the long run a more powerful way to protect against age-related disease would be to intervene in the aging process itself. This would provide protection against the full spectrum of age-related illnesses.

Gems’ article is nuanced and complex, with enough angst to appear truly conflicted:

…But is this a type of medicine that humanity should pursue? As I see it, decelerating human aging would have two outcomes in ethical terms. On the one hand, it would reduce disease on an enormous scale. This would be a great good. On the other hand, it would lead to life extension, perhaps eventually of a large magnitude. This second outcome is controversial. Surveys of public opinion, for example by researchers at the University of Queensland in Australia in 2009, suggest that most people would favor this outcome, but not all. There have been some vocal opponents. Yet, given the great benefit of decelerated aging in terms of reduced suffering, I feel we must pursue this approach, despite the misgivings.

He ends with this:

…So it is that decelerated aging would force a dilemma upon us. Should we alleviate suffering on a large scale and accept life extension? Or should we allow an immensity of avoidable suffering in order to avoid extending life? To my mind, the only reasonable course is the first. In fact, we should pursue it energetically, and begin to prevent illness as soon as is feasible. If not, we risk the fury of future generations for dithering. As for life extension, we will just have to take that on the chin. If we can prepare for it socially, politically and institutionally, and if we keep birth rates low, we should be able to ensure long, healthier, happier lives for our children and for our children’s children.

This is a fascinating topic. Due to researchers like Gems, it is no longer an abstraction.