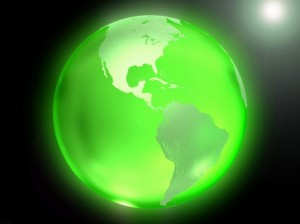 Green energy no way? Not so fast…

Some time ago, we brought to your attention a study that explored the possibility of a world running on 100 percent renewable energy. Lots of readers were enthusiastic about trying to see if this can be done. Others were highly skeptical.

Now, comes a new report, from the UN, saying that within 40 years, 80 percent of the world’s energy needs could actually come from renewable sources. 100 percent, 80 percent. Both sound pretty good.

Here’s the UK’s The Guardian:

Renewable energy could account for almost 80% of the world’s energy supply within four decades – but only if governments pursue the policies needed to promote green power, according to a landmark report published on Monday.

The Intergovernmental Panel on Climate Change, the body of the world’s leading climate scientists convened by the United Nations, said that if the full range of renewable technologies were deployed, the world could keep greenhouse gas concentrations to less than 450 parts per million, the level scientists have predicted will be the limit of safety beyond which climate change becomes catastrophic and irreversible.

Investing in renewables to the extent needed would cost only about 1% of global GDP annually, said Rajendra Pachauri, chairman of the IPCC.

Renewable energy is already growing fast – of the 300 gigawatts of new electricity generation capacity added globally between 2008 and 2009, about 140GW came from renewable sources, such as wind and solar power, according to the report.

The investment that will be needed to meet the greenhouse gas emissions targets demanded by scientists is likely to amount to about $5trn in the next decade, rising to $7trn from 2021 to 2030.

Ramon Pichs, co-chair of one of the key IPCC working groups, said: “The report shows that it is not the availability of [renewable] resources but the public policies that will either expand or constrain renewable energy development over the coming decades. Developing countries have an important stake in the future – this is where most of the 1.4 billion people without access to electricity live yet also where some of the best conditions exist for renewable energy deployment.”

Sven Teske, renewable energy director at Greenpeace International, and a lead author of the report, said: “This is an invitation to governments to initiate a radical overhaul of their policies and place renewable energy centre stage. On the run up to the next major climate conference, COP17 in South Africa in December, the onus is clearly on governments to step up to the mark.”

He added: “The IPCC report shows overwhelming scientific evidence that renewable energy can also meet the growing demand of developing countries, where over 2 billion people lack access to basic energy services and can do so at a more cost-competitive and faster rate than conventional energy sources. Governments have to kick start the energy revolution by implementing renewable energy laws across the globe.”

The 1,000-page Special Report on Renewable Energy Sources and Climate Change Mitigation (SRREN) marks the first time the IPCC has examined low-carbon energy in depth, and the first interim report since the body’s comprehensive 2007 review of the science of climate change.

Although the authors are optimistic about the future of renewable energy, they note that many forms of the technology are still more expensive than fossil fuels, and find that the production of renewable energy will have to increase by as much as 20 times in order to avoid dangerous levels of global warming. Renewables will play a greater role than either nuclear or carbon capture and storage by 2050, the scientists predict.

Investing in renewables can also help poor countries to develop, particularly where large numbers of people lack access to an electricity grid.

About 13% of the world’s energy came from renewable sources in 2008, a proportion likely to have risen as countries have built up their capacity since then, with China leading the investment surge, particularly in wind energy. But by far the greatest source of renewable energy used globally at present is burning biomass (about 10% of the total global energy supply), which is problematic because it can cause deforestation, leads to deposits of soot that accelerate global warming, and cooking fires cause indoor air pollution that harms health.

There was disappointment for enthusiasts of marine energy, however, as the report found that wave and tidal power were “unlikely to significantly contribute to global energy supply before 2020”. Wind power, by contrast, met about 2% of global electricity demand in 2009, and could increase to more than 20% by 2050.

As with all IPCC reports, the summary for policymakers – the synopsis of the report that will be presented to governments and is likely to impact renewable energy policy – had to be agreed line by line and word by word unanimously by all countries. This was done at Monday’s meeting in Abu Dhabi. This makes the process lengthy, but means that afterwards no government or scientist represented can say that they disagree with the finished findings, which the IPCC sees as a key strength of its operations.

The New York Times was out quickly with a rather dull business section item, and with a blog dampener:

The result is a suite of 160 clean and neat “what if” scenarios, but very little (at least if the summary reflects what’s coming in the full 900-page report at the end of the month) on how the more aggressive scenarios for cleaning up the global energy supply might actually be achieved in the real world of competing and conflicting national, corporate and personal interests.

The summary, for example, barely mentions natural gas, even though it is hard to find an energy analyst these days who does not see low natural gas prices, now foreseen for decades to come, as deeply undercutting prospects for expanded deployment of renewable energy sources (let alone nuclear power).

This kind of spin says that the cart goes before the horse, and, surprise surprise, we get nowhere fast.

Worse, the UN report, which involved a tremendous amount of energy and urgency, may hardly be noticed at all. Did you see it featured on your evening television news, hear this from your favorite online or print  source? Did they treat it as a huge story? If not, there’s the problem. (Hint: Do you notice all the advertising from the oil and gas industry?)

The bottom line: visibility is crucial—if action is to follow.

This is why we cannot depend on “old media” any more than on “old energy.”