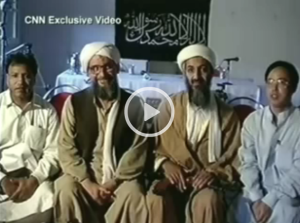 Ok, time to wake up from the dream. The royal wedding sure was nice, but it affects your life—or anything—exactly how? And the death of Osama bin Laden. Amazing rush. Now—what exactly changes?

From an analysis Sunday by the New York Times

Though the Taliban and Al Qaeda have been entwined, their aims are believed to have differed. The Taliban’s primary goal has been to control Afghanistan, whereas Al Qaeda has wanted to establish a global terrorist network.

The question for the United States, then, is how many resources — and how many American casualties — should be devoted to dealing with what is essentially a local insurgency, now that Bin Laden is gone?

But is it a local conflict “now that Bin Laden is gone”, or has Afghanistan been essentially a domestic matter? In fact, one wonders why it was a US conflict at all. After 9/11, during the US bombing of Afghanistan, the Taliban deputy prime minister had offered to turn bin Laden over (with qualifications, to be sure—end the bombing, provide proof of his involvement with 9/11, he’d be handed to a third country—but still, it was an opening…)

The significance of that—and of the United States’ failure to seriously engage with him on that issue, and how this has played out for so many years now—cannot be overstated. That’s probably the most important point. The second point is that for most of the past decade, there has been no indication or expectation that Al Qaeda was still functioning from Afghanistan. And, of course, in the end, he was holed up right near the capital of Pakistan, instead.

Also, is the Times article correct that Al Qaeda’s “primary goal” is to “establish a global terrorist network”? Is this an accurate statement? Probably no more than to say that the US government’s “primary goal” is to “keep troops fighting throughout the world.” Establishing a terrorist network is means to a goal that is rarely examined except in the most cursory manner, if at all.

This underlines the convoluted nature of the discussion itself. Journalists trying to cover it in a dignified manner have to turn themselves into pretzels to justify government policy.

What we almost never see discussed is the bottom line. What is the long-term nature of the Islamic fundamentalist threat, or the nature of the worldview and grievances behind it?

If you were to talk with self-described militant fundamentalists at arms, they would hardly come across as the prototypical villain in a James Bond movie. They are a lot like religious fundamentalists of all stripes—deeply alarmed by what they view as the excesses of modernity, and determined at all costs to preserve their way of life.

Most of these people, again like true believers everywhere (including in the United States), are devoted to family and tradition. They are not selfish in the classical definition of the term. We may (should and do) abhor the horrible particulars—Sharia, ways of treating women, and especially willingness to blow oneself up along with lots of others—but it is their brutal, gruesome chosen coping method in what they view as a matter of principle.

Also, to be fair, in terms of generating sheer loss of life, the United States does not have a very good record either, considering the hundreds of thousands of dead and maimed civilians related to the ongoing Iraq and Afghanistan wars, “collateral damage”—much of it by remote control, and therefore sanitized but no less tragic.

In any case, the “war,” whatever it is really about, will not end with bin Laden’s death. As the Times puts it:

Taliban members were passing around a message from Ayman al-Zawahri, Al Qaeda’s No. 2 and Bin Laden’s possible successor, saying that “killing Osama bin Laden is just like taking a single grape from a bunch of grapes.”

The threat and the conflict will only begin to lessen when intractable forces (including the US military/political leadership and those who support it unquestioningly–and to be sure the Muslim fundamentalists) all feel that they are not threatened by an inexorable force bent on destroying their way of life.

That’s a tough one, but the first step toward a solution is to understand the true nature of the problem.

One fascinating attempt at this is a 2004 BBC documentary called The Power of Nightmares: The Rise of the Politics of Fear. It presents a surprising look at the roots of modern Islamic fundamentalism and makes an interesting comparison with American Neoconservatism.

Most Americans have never heard of this film.

Watch it—it is a great starting point for a new conversation.