George Carlin on “The American Dream”: A Few Dirty Words and A Whole Lot of Sense - WhoWhatWhy
Reading Time: 3 minutes 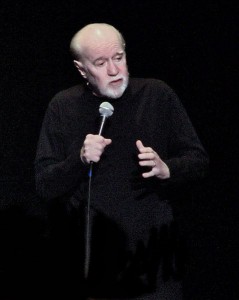 Sometimes, to get a really clear perspective on things, we need to turn to a comedian. Unfortunately, we can’t get updates from the dear, departed George Carlin. But a lot of his work comes off as if it were written yesterday. Such it is with his 2005 routine, “The American Dream.”

Thanks to the fellow here, we have a transcript (with a little copy-editing from yours truly)—and performance video.

If expletives offend you, this is a good point to…click back to the home page. Otherwise, ladies and gents, Mr. George Carlin….

….there’s a reason education SUCKS, and it’s the same reason it will never, ever,  EVER be fixed.

It’s never going to get any better, don’t look for it. Be happy with what you’ve got.

Because the owners, the owners of this country, don’t want that. I’m talking about the real owners now, the BIG owners! The Wealthy… the REAL owners! The big wealthy business interests that control things and make all the important decisions.

Forget the politicians. They are irrelevant. The politicians are put there to give you the idea that you have freedom of choice. You don’t. You have no choice! You have OWNERS! They OWN YOU. They own everything. They own all the important land. They own and control the corporations. They’ve long since bought—and paid for—the Senate, the Congress, the state houses, the city halls, they got the judges in their back pockets and they own all the big media companies, so they control just about all of the news and information you get to hear. They got you by the balls.

That’s right. They don’t want people who are smart enough to sit around a kitchen table and think about how badly they’re getting fucked by a system that threw them overboard 30 fucking years ago. They don’t want that!

You know what they want? They want obedient workers. Obedient workers, people who are just smart enough to run the machines and do the paperwork. And just dumb enough to passively accept all these increasingly shitty jobs with the lower pay, the longer hours, the reduced benefits, the end of overtime and vanishing pension that disappears the minute you go to collect it, and now they’re coming for your Social Security money. They want your retirement money. They want it back so they can give it to their criminal friends on Wall Street—and you know something? They’ll get it. They’ll get it all from you sooner or later ‘cause they own this fucking place! It’s a big club, and you ain’t in it! You, and I, are not in the big club.

By the way, it’s the same big club they use to beat you over the head with all day long when they tell you what to believe. All day long beating you over the head with their media telling you what to believe, what to think and what to buy. The table has tilted, folks. The game is rigged and nobody seems to notice. Nobody seems to care! Good honest hard-working people; white collar, blue collar it doesn’t matter what color shirt you have on. Good honest hard-working people continue—these are people of modest means—continue to elect these rich cock suckers who don’t give a fuck about you….they don’t give a fuck about you… they don’t give a FUCK about you.

They don’t care about you at all… at all… AT ALL.  And nobody seems to notice. Nobody seems to care. That’s what the owners count on. The fact that Americans will probably remain willfully ignorant of the big red, white and blue dick that’s being jammed up their assholes everyday, because the owners of this country know the truth.

It’s called the American Dream—because you have to be asleep to believe it.

7 responses to “George Carlin on “The American Dream”: A Few Dirty Words and A Whole Lot of Sense”