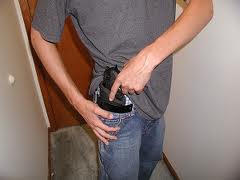 Soon, Texas college professors and students will be able to carry concealed handguns on campus. Does this make you feel safer?

Here’s the story, as reported by the Associated Press and carried in the San Francisco Chronicle (a city whose Mayor, George Moscone, was killed by another elected official with a registered gun):

Texas is preparing to give college students and professors the right to carry guns on campus, adding momentum to a national campaign to open this part of society to firearms.

More than half the members of the Texas House have signed on as co-authors of a measure directing universities to allow concealed handguns. The Senate passed a similar bill in 2009 and is expected to do so again. Republican Gov. Rick Perry, who sometimes packs a pistol when he jogs, has said he’s in favor of the idea.

Texas has become a prime battleground for the issue because of its gun culture and its size, with 38 public universities and more than 500,000 students. It would become the second state, following Utah, to pass such a broad-based law. Colorado gives colleges the option and several have allowed handguns.

Supporters of the legislation argue that gun violence on campuses, such as the mass shootings at Virginia Tech in 2007 and Northern Illinois in 2008, show that the best defense against a gunman is students who can shoot back.

“It’s strictly a matter of self-defense,” said state Sen. Jeff Wentworth, R-San Antonio. “I don’t ever want to see repeated on a Texas college campus what happened at Virginia Tech, where some deranged, suicidal madman goes into a building and is able to pick off totally defenseless kids like sitting ducks.”

So, question: Is state Sen. Jeff Wentworth right that we’re “sitting ducks” when we all are not armed—or are we sitting ducks when everyone is armed?