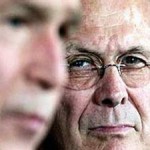 In Donald Rumsfeld’s new book, Known and Unknown, out February 8, Rumsfeld offers an account of George W. Bush’s early interest in Iraq.  This was just days after the 9/11 attacks.  There were no apparent reasons for Bush to focus on Iraq, instead of on the actual perpetrators of the attacks.

Here’s the Rumsfeld version as reported in an advance peek from The New York Times,

Just 15 days after the terrorist attacks of Sept. 11, 2001, President George W. Bush invited his defense secretary, Donald H. Rumsfeld, to meet with him alone in the Oval Office. According to Mr. Rumsfeld’s new memoir, the president leaned back in his leather chair and ordered a review and revision of war plans — but not for Afghanistan, where the Qaeda attacks on New York and Washington had been planned and where American retaliation was imminent.

“He asked that I take a look at the shape of our military plans on Iraq,” Mr. Rumsfeld writes.

“Two weeks after the worst terrorist attack in our nation’s history, those of us in the Department of Defense were fully occupied,” Mr. Rumsfeld recalls. But the president insisted on new military plans for Iraq, Mr. Rumsfeld writes. “He wanted the options to be ‘creative.’ ”

When the option of attacking Iraq in post-9/11 military action was raised first during a Camp David meeting on Sept. 15, 2001, Mr. Bush said Afghanistan would be the target. But Mr. Rumsfeld’s recollection in the memoir, “Known and Unknown,” to be published Tuesday, shows that even then Mr. Bush was focused as well on Iraq.

What Rumsfeld seems to be saying, without saying it explicitly, is hugely important: that Bush’s rush to war with Iraq seemed to make no sense. More than that, it was downright fishy.

Rumsfeld suggests that Bush had some kind of prior agenda that had nothing to do with any role Iraq might have had (and in any case did not) in the events of 9/11. Bush simply wanted to invade that country.

If so, why? Rumsfeld apparently doesn’t speculate. But he doesn’t need to.

In my book, Family of Secrets, I recount interviews with Mickey Herskowitz, a Texas journalist who was George W. Bush’s co-author on a preliminary version of the latter’s 2000 book A Charge to Keep. Bush admitted, Herskowitz told me, that he was actually hoping to find an excuse to invade Iraq. Here’s an excerpt from Family of Secrets:

“He was thinking about invading Iraq in 1999,” Herskowitz told me in our 2004 interview, leaning in a little to make sure I could hear him properly. “It was on his mind. He said to me: ‘One of the keys to being seen as a great leader is to be seen as a commander in chief.’ And he said, ‘My father had all this political capital built up when he drove the Iraqis out of Kuwait, and he wasted it.’ He said, ‘If I have a chance to invade . . . if I had that much capital, I’m not going to waste it. I’m going to get everything passed that I want to get passed, and I’m going to have a successful presidency.’ ”

Herskowitz said that Bush expressed frustration at a lifetime as an underachiever in the shadow of an accomplished father. In aggressive military action, he saw the opportunity to emerge from his father’s shadow.

That opportunity, of course, would come in the wake of the September 11 attacks. “Suddenly, he’s at ninety- one percent in the polls,” Herskowitz said, “and he’d barely crawled out of the bunker.” Just four days before, according to a Gallup poll, his approval rating was 51 percent.

Herskowitz said that George W. Bush’s beliefs on Iraq were based in part on a notion dating back to the Reagan White House, and ascribed in part to Dick Cheney, who was then a powerful congressman. “Start a small war. Pick a country where there is justification you can jump on, go ahead and invade.”

Bush’s circle of preelection advisers had a fixation on the political capital that British prime minister Margaret Thatcher had amassed from the Falklands War with Argentina. Said Herskowitz: “They were just absolutely blown away, just enthralled by the scenes of the troops coming back, of the boats, people throwing flowers at [Thatcher] and her getting these standing ovations in Parliament and making these magnificent speeches.” It was a masterpiece of “perception management”—a lesson in how to maneuver the media and public into supporting a war, irrespective of the actual merits.

What’s remarkable is that after all this time, news outlets such as the Times, and almost every other major corporate-owned news outfit, has simply ignored what is now a matter of public record. Herskowitz is no duffer. He is a longtime Texas newspaper columnist who has ghostwritten or co-authored several dozen books on major figures in politics and sports.  He went on to write the authorized biography of Bush’s grandfather, at the invitation of Bush’s father.  The family obviously trusted him.

14 responses to “Bush, Rumsfeld and Iraq: Is the Real Reason for the Invasion Finally Emerging?”