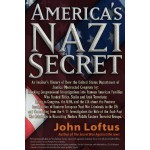 America’s Nazi Secret is not what you’d call extremely reader-friendly material. Sometimes it feels like a chore to read it. But wow—does it ever provide powerful insight into the “deep politics” of US policy.

Born of the Boston Irish, John Loftus never imagined that he would end up tracking down Byelorussian Nazi collaborators living in the US. And he certainly could not have conceived of doing so with a passion that would continue decades past his departure from the federal government.

After serving as an Army Intelligence officer and graduating law school, in 1977 Loftus had gotten a job with the Justice Department. He saw an internal posting for a position with the Office of Special Investigations (charged with prosecuting and deporting Nazi war criminals from the United States), and thought it would be a good career move. Only later did he become obsessed with his mission.

In 1979, Loftus was assigned to head the “Belarus Project,” which he says was “ostensibly a comprehensive review of American and German files pertaining to the Holocaust in Byelorussia, or Belarus as the Nazis called it. Privately, my secret assignment…was to find out who was responsible for sabotaging the postwar investigations of Nazi bankers at the International Military Tribunal at Nuremberg.”

In essence, Loftus found that, in contravention of official US policy, figures and sections within his own agency (the Justice Department), as well as the State Department and the intelligence apparatus, had knowingly falsified records so as to bring some of the worst butchers of World War II to the US. The goal was to enlist them and their associates in anti-Soviet espionage. But once the records of these individuals were cleaned up and they were allowed to stay, they provided what would turn out to be largely useless intelligence, and in many cases they or their own east-bloc spy networks were discovered to have been massively penetrated by the Soviets.

Loftus goes down into the darkest basements of the US government, where one branch is snookering the next, where operations are being subverted by their own members, and individuals, under orders, cover up for some colleagues’ illegal acts and obstruct the congressionally-mandated work of others.

It’s all ultimately supposed to be for the Cold War cause, but Loftus raises more sinister motives. These include a frenetic effort by powerful US industrialists and bankers to hide their own business ties with the Nazis. They would do this, Loftus asserts, by getting the government to create a super-secret de facto policy of covering up dealings with the Nazis – for anyone who could play a role in the battle against the Communist threat.

His detailing of the deceptive practices, incompetence and ruthlessness found in these dark chambers of the US government is compelling. Among other things, Loftus provides a fresh account of the forced merger of the spectacularly devious covert operations unit, OPC, into the CIA, and how OPC managed to maintain its own independent files, agents and networks and to mislead their CIA colleagues on a host of issues. Other agencies were involved as well in the games. As he writes:

“…the Attorney General…had personally approved the immigration of Mykola Lebed. Arguably the highest-ranking Nazi war criminal ever to enter the United States, Lebed was the head of the SB, the Ukrainian version of the Gestapo, and one of the top twenty war criminals wanted by the Soviet Union. Justice had given a false biography to the CIA. CIA thought Lebed was an anti-Nazi resistance leader….Indeed…the CIA and Congress were thoroughly suckered in. Lebed’s… men murdered tens of thousands of Polish, Jewish, and Ukrainian citizens. I know this is true because I found the original files of Mykola Lebed in the Army Intelligence vaults at Suitland, Maryland, and showed them to my superiors at the Justice Department….”

Especially horrific and therefore powerful are his accounts of the atrocities ordered or carried out by individuals who ended up quietly living their lives out in small towns in New Jersey and the Midwest.

The downside is that this is a long book, with a lot of characters with strange foreign names, a great deal of technical material as a way of proving Loftus’s case, and a sense that it cried out for a good editor. A good deal of the most interesting material is in the footnotes, including some really explosive claims, unfortunately rendered too briefly and usually not backed up with supporting material. Loftus is sloppy with details, misspells some really obvious words and names (e.g. the commoner wife for whom King Edward VIII abdicated becomes “Wallace” Simpson instead of “Wallis.” This does not inspire confidence. Still, it’s hard to dispute the things that he personally uncovered— armed with a security clearance several levels above “top secret”—in the bowels of long-ignored federal records storage facilities. America’s Nazi Secret includes copies of actual documents for verification.

You’ll find the presentation odd. He has an extremely long introduction, followed by a preface and a prologue. But there’s a reason for this. When much of this material was first published in 1982, as The Belarus Secret, it was heavily censored by the government. This time around, he’s updating the manuscript with material he couldn’t include before, and some of the most important information is found in the parts preceding the main chapters.

None of this has been easy for Loftus, and he deserves our respect. He has been jumping hurdles with almost superhuman resolve ever since he started down this path three decades ago. For example, “the Justice Department had directly threatened me with disbarment if I disclosed what I knew about any living Nazi working for US or British intelligence.”

Of particular interest these days, with developments in Egypt (but only briefly detailed in the book), is his material on the Muslim Brotherhood and its ties to the Nazis.