Here’s an ominous development that is likely to pass almost unnoticed: a congressman requesting that the federal government identify to him everyone who has made a request under the Freedom of Information Act. 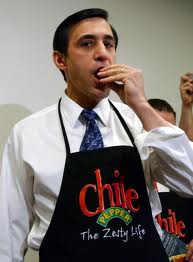 The requester is Darrell Issa, the new head of the House Oversight Committee. He of course paints his initiative in benign terms—he just wants to make sure the government isn’t dragging its feet in answering public queries. But it’s hard to accept that at face value, without at least considering the  corporate interests that backed the GOP takeover in November, and Issa’s ascension to this powerful position.

As reported in The New York Times,

Representative Darrell Issa calls it a way to promote transparency: a request for the names of hundreds of thousands of ordinary citizens, business executives, journalists and others who have requested copies of federal government documents in recent years.

Mr. Issa, a California Republican and the new chairman of the House Committee on Oversight and Government Reform, says he wants to make sure agencies respond in a timely fashion to Freedom of Information Act requests and do not delay them out of political considerations.

But his extraordinary request worries some civil libertarians. It “just seems sort of creepy that one person in the government could track who is looking into what and what kinds of questions they are asking,” said David Cuillier, a University of Arizona journalism professor and chairman of the Freedom of Information Committee at the Society of Professional Journalists. “It is an easy way to target people who he might think are up to no good.”

The very short Times article doesn’t get into the extent to which Issa and his allies are indebted to corporations that have a strong interest in finding out about inquiries that could affect their interests. Like reporters nosing around into the military-industrial complex, or trying to find out about stalled prosecutions of egregious polluters.

If, indeed, Issa is just super concerned about openness in government, that’s fine. But it’s not clear that a member of Congress— and a highly politicized, partisan one at that—ought to be the one to receive such sensitive information.

Can Issa be trusted? Well, consider this New York Magazine summary of a New Yorker dig into Issa:

The New Yorker’s Ryan Lizza has taken a long look into the often shady past of California congressman Darrell Issa, the House Oversight Committee chairman who intends to unleash a flurry of investigations on the Obama administration. Issa has, “among other things, been indicted for stealing a car, arrested for carrying a concealed weapon, and accused by former associates of burning down a building.” “Everyone has a past,” Issa tells Lizza. This is true. But not everyone has fired an employee by “plac[ing] a box on the table, and open[ing] it to reveal a gun.”

Such personal behavior is bad enough, but often, as with Issa, it parallels shocking professional behavior. For example, on taking his committee chairmanship, Issa sent a letter out to big corporations inviting them to tell him which government regulations they do not like.

The House panel Issa heads is an important one, and it’s had some real characters at its helm. One who made a name for himself during the Clinton years was fellow Republican Dan Burton. For more on his antics, see an article by—well, by me, here.