Events keep on underlining the gap between the rhetoric and the reality. Nowhere is this more true than with the disparity between the way we talk about our soldiers and their service and the way they are actually treated. (And if we become indignant about this, we might also get a little indignant about the treatment of all Americans, who, each in their own way, serve their country.) 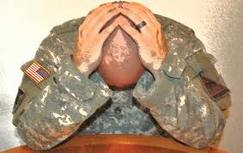 First, the rhetoric. In his State of the Union address, President Obama made some rousing statements, which were met with rare bipartisan applause:

Look to Iraq, where nearly 100,000 of our brave men and women have left with their heads held high. (Applause.)

…we must always remember that the Americans who have borne the greatest burden in this struggle are the men and women who serve our country. (Applause.)

Tonight, let us speak with one voice in reaffirming that our nation is united in support of our troops and their families. Let us serve them as well as they’ve served us — by giving them the equipment they need, by providing them with the care and benefits that they have earned, and by enlisting our veterans in the great task of building our own nation.

Then, compare that, first, with this NBC report we previously noted. JPMorgan Chase has been forced by a lawsuit to admit that it has been overcharging thousands of military families for their mortgages—and had improperly foreclosed on more than a dozen such families. It also was harassing soldiers with late-night phone calls for debts they did not owe. NBC’s report did not note that Obama’s new chief of staff William Daley came directly from a top post with JPMorgan, and held $7.6 million in bank stock.

Now, add this: the story of a Sgt. James B. Hurley, who, while away at war, got a nice little thank you for his service. As just reported in the New York Times,

In violation of a law intended to protect active military personnel from creditors, agents of Deutsche Bank foreclosed on his small Michigan house, forcing Sergeant Hurley’s wife, Brandie, and her two young children to move out and find shelter elsewhere.

So, those darned Krauts, again? Nah. Like Morgan, Deutsche and most of these other giant banks are truly transnational, operating anywhere and anywhere they can make a buck. Patriotism (toward what country, one might ask) is a joke—something to be invoked only to get those poor schlubs we honor to trek out and die and kill and get maimed for a modest paycheck and real objectives that are never shared with them.

And what are those applauding members of Congress going to do to help this hero?

Sergeant Hurley has been on an odyssey through the legal system, with little hope of a happy ending — indeed, the foreclosure that cost him his home may also cost him his marriage. “Brandie took this very badly,” said Sergeant Hurley, 45, a plainspoken man who was disabled in Iraq and is now unemployed. “We’re trying to piece it together.”

Sergeant Hurley is exactly right. We need to “piece it together”—not just his shattered life, but also the larger picture, the real narrative that is implied but rarely stated in the news reports, about the relationships between financial institutions and the power at the top and the hollow rhetoric the rest of us are supposed to buy.