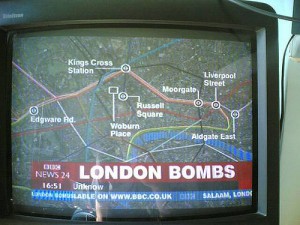 The other day, I came upon an article I’d read in the British paper, The Independent, during the summer, when I was visiting the British isles. The article was, frankly, stunning. I had tucked it away for later, and intended to see how it would be covered in the United States. Well, much to my further astonishment, aside from a brief article on page 10 of the New York Times, the U.S. media had completely ignored this story. So, better late than never, here are key excerpts from The Independent:

Giving evidence to the same inquiry, Eliza Manningham-Buller revealed that there was such a surge of warnings of home-grown terrorist threats after the invasion of Iraq that MI5 asked for – and got – a 100 per cent increase in its budget. Baroness Manningham-Buller, who was director general of MI5 in 2002-07, told the Chilcot panel that MI5 started receiving a “substantially” higher volume of reports that young British Muslims being drawn to al-Qa’ida.

She added: “Arguably we gave Osama bin Laden his Iraqi jihad so that he was able to move into Iraq in a way that he was not before.” [italics mine]

Her words are in stark contrast to the claim that Mr Blair made in front of the same inquiry on 29 January. The former prime minister told Sir John Chilcot: “If I am asked whether I believe we are safer, more secure, that Iraq is better, that our own security is better, with Saddam and his two sons out of office and out of power, I believe indeed we are.

“It was better to deal with this threat, to remove him from office, and I do genuinely believe that the world is safer as a result.”

But the evidence presented by Lady Manningham-Buller does not just call Mr Blair’s credibility into question, it also throws down a challenge to the coalition Government, warned Lord Carlile of Berriew, a Liberal Democrat peer who has acted since 2005 as the independent reviewer of anti-terror laws. He told The Independent: “It’s certainly the case that the threat and number of home-grown terrorists – and ‘not home-grown’ terrorists coming into the UK – increased after the Iraq war.

On and on it goes, one head-slam after another, and then things get ratcheted up with a game of “What he said—and what she said”. Read on, and consider: How often have you seen such brutal candor in an American daily newspaper?

Evidence: What he said – and what she said

False claims of links between al-Qa’ida and Saddam Hussein

“We believe that there have been, and still are, some al-Qa’ida operatives in parts of Iraq controlled by Baghdad. It is hard to imagine that they are there without the knowledge and acquiescence of the Iraqi government.”

“There was no credible intelligence to suggest that connection and that was the judgment, I might say, of the CIA.”

“The intelligence is clear: He [Saddam] continues to believe his WMD programme is essential both for internal repression and for external aggression. The biological agents we believe Iraq can produce include anthrax, botulinum, toxin, aflatoxin and ricin. All eventually result in excruciatingly painful death.”

“The nature of intelligence – it is a source of information, it is rarely complete, it needs to be assessed, it is fragmentary… We were asked to put in some low-grade, small intelligence to it [the September 2002 dossier] and we refused because we didn’t think it was reliable.”

Iraq posed no risk to Britain

“Saddam Hussein is developing weapons of mass destruction, and we cannot leave him doing so unchecked. He is a threat to his own people and to the region and, if allowed to develop these weapons, a threat to us also.”

“We regarded the direct threat from Iraq as low… we didn’t believe he had the capability to do anything in the UK.”

The bombs detonated on London Underground trains and a bus in July 2005 killed 52 members of the public and injured around 700. Three of the four suicide bombers had been born in Yorkshire; the fourth, born in Jamaica, came to the UK aged five. In his video, one bomber said: “Your democratically elected governments continuously perpetuate atrocities.”

Bilal Abdulla, a doctor, and Kafeel Ahmed, a PhD engineering student, tried and failed to set off bombs outside a London nightclub on 29 June. The following day they drove a jeep filled with gas canisters into Glasgow Airport. Abdulla’s trial heard his involvement was “because of events in Iraq”.

A terror plot was exposed in which liquid bombs were to be smuggled on to airliners. Many of the men made ‘suicide’ videos citing British foreign policy. Umar Islam said in his video: “If you think you can go into our land and do what you are doing in Iraq, Afghanistan and Palestine and… think it will not come back on to your doorstep, you have another think coming.”