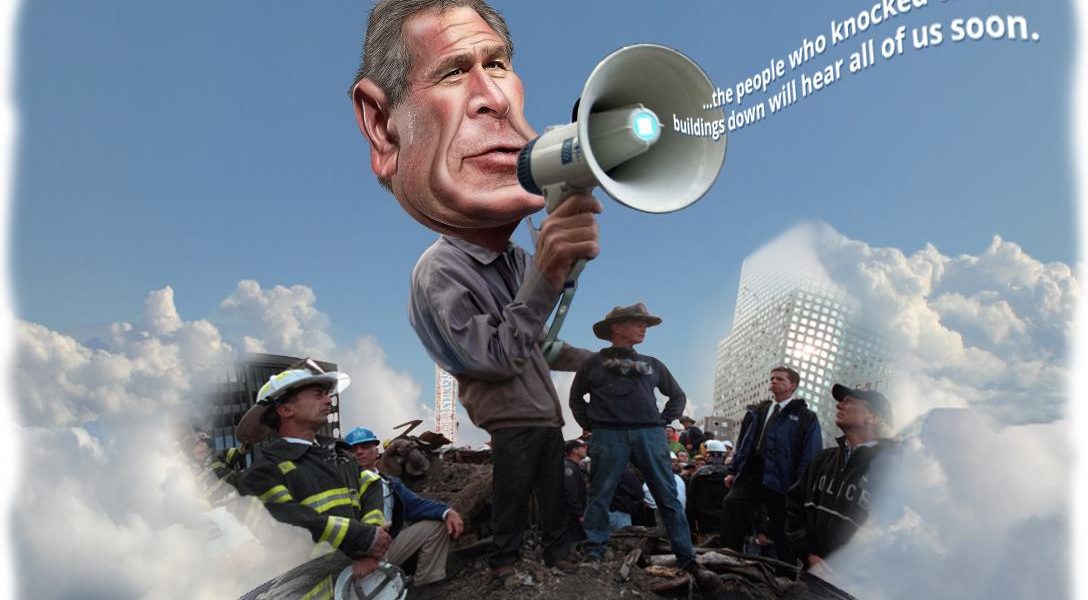 9/11 Was Devastating. But Was the Response Even Worse?

“I can hear you!” President George W. Bush declared, to cheers and ‘U-S-A’ chants, when he stood on the rubble of the World Trade Center three days after the attack. “The rest of the world hears you! And the people — and the people who knocked these buildings down will hear all of us soon.”

It is often said that 9/11 “changed everything.” While that is certainly true for the families of the nearly 3,000 people who died that day, it was the response to the attacks that harmed — and ended — many more lives.

In the war in Afghanistan, 2,384 American servicemen have lost their lives since the 9/11 attacks. In addition, more than 20,000 US troops were wounded, many of them severely.

Add to that hundreds of thousands of Iraq and Afghanistan veterans who returned home with post-traumatic stress disorder and depression.

And still, the toll on US troops is nothing compared to what the people of Afghanistan and Iraq had to endure.

It should be noted that living in Afghanistan and Iraq prior to the US-led invasions was certainly no picnic. However, these civilian casualties are a direct consequence of the US decision to attack the two countries.

And because of the manner of attack, the tactics used in the “War on Terror” — torture, extraordinary rendition, the operation of “black site” prisons, and drone attacks on civilians — the standing of the United States abroad has been diminished.

Worse yet, these tactics have inspired increased jihadi recruitment.

In addition to the death and destruction in Iraq and Afghanistan, the wars have also led to a further destabilization of the region — increasing rather than eliminating acts of terrorism, and the threat of more terrorism.

The destabilization also led to the creation of ISIS, and the flood of millions of refugees into Europe and beyond.

Of course, the effects of the US response to 9/11 were not just felt abroad.

Just ask anybody who likes to bring a bottle of water on a plane. But beyond the obvious inconveniences imposed on air travelers in the name of safety are changes with far more serious consequences.

Most important is the erosion of civil liberties that the Bush administration and Congress pushed through after the attacks. The Patriot Act, which passed 98-1 in the Senate, made it much easier for the government to spy on innocent Americans. Provisions supposedly intended to fight foreign terrorists were quickly and predictably hijacked by domestic law enforcement agencies for all kinds of purposes. Some parts of the Patriot Act were eventually rolled back but not until after NSA whistleblower Edward Snowden disclosed the extent to which the government was keeping tabs on the communications of Americans.

All of this came at a monetary price as well. According to some estimates, the two wars alone have cost nearly $3 trillion. Add to that the money spent on “homeland security” efforts, and it comes out to more than $10,000 spent per US citizen — and still counting.

On the anniversary of 9/11 it is important to keep all of these numbers in mind. Yes, the attacks on the World Trade Center changed everything. But at what point are we obligated to ask if too many lives have been lost, too much money has been spent, and too many rights have been trampled in pursuit of — exactly what?

What is next on ‘their’ agenda?

Don’t forget the depleted uranium bombs we lovingly exploded in Iraq and Afghanistan, which contaminated those two countries for hundreds of years in the future. But we showed ’em, didn’t we? American imperialism continues unabated since it matters little who lives at 1600 Penn Ave…

It appears to me that the government of the United States have learned nothing from Viet Nam, Iraq, or Afghanistan but are continuing to drive a foreign policy of unprecedented disaster.

In order to stop terrorism we have to have a proper evaluation of its history. Invading Afghanistan hasn’t stopped it.

Excuse me, the USA has a lot to answer for, and it’s all bad, very bad. Wake up US citizens.

Of course the response was worse , much worse and STILL going on now around the world . 15 years have passed by and still we are none the wiser . I don’t know how many people still believe the government’s version but that number is getting smaller every day. Short of arresting Bush , Cheney, Rumsfeld and the like and torturing the truth out of them I don’t know how we can find out. No I do not believe in torture but Bush etc. do so what the hell . Oh don`t forget Tenet and all the rest of the PNAC mob of gangsters while you’re at it.
Whoever was responsible it and the over done and illegitament response is the crime of the century and drastic action is now needed to find those responsible .

I hope I live long enough to see the real people responsible for 9/11 finally taken down and punished. They live right in the country so it should be easy to find them!

They, like so many, are above the law because they are the ones making the law. They don’t have to be worried about covering their tracks because there will be enough smoke to make sure nothing will ever been seen clearly.
I’ll never forget the campaign promise Lil’ Bush made about he was going
to rebuild our military to what it once was…. He wasn’t going to do that with out showing a need for it. BAM! Along comes 9-11

All of this while ignoring the truth of how the attacks were perpetrated and who actually perpetrated them.

Having been mostly unemployed (except for a few short-term contract jobs) since 2001, I want to appeal to someone in charge of the money printing at the FED if they could send me a portion of the newly printed bills (bond debt, actually) to make up for my more than $10,000.00 assessment.

I promise to use it to provide Homeland Security.

All of this came at a monetary price as well. According to some
estimates, the two wars alone have cost nearly $3 trillion. Add to that
the money spent on “homeland security” efforts, and it comes out to more
than $10,000 spent per US citizen — and still counting.

Cheney & Bush Asked Tom Daschle Not To Investigate 9/11 At All. Why would the President and the Vice President not want to know exactly how and why 9/11 happened so as to make sure it could never happen again?

Compare the furore over 9/11/12 to the foot-dragging 400+ days to investigate 9/11/01. Who got sent the letters of anthrax sourced to a U.S. military lab and why? The response was appalling on everything from choosing Henry Kissinger to lead the investigation to the media’s complete lack of diligence surrounding this entire issue/event.

i saw a report that Hillary has met with Kissinger a bunch of times in the past year.

The media didn’t lack diligence; they were part of it from the git-go.

Wow I agree with you here. Also it breaks my heart to see that you’ve been out of work this long. I’m sorry I was so hard on you in earlier posts. I apologize. If I can help you find work I will. I’m well connected in Silicon Valley if you’re out here I can help. We don’t need to meet just let me know if you’re interested and I’ll send you some direction and leads that aren’t generally posted.