HARLEM, New York — Hawa Bah’s son was holed up in his Harlem apartment, experiencing what she feared was a first-time depressive episode. He was thin and frail; there was a noticeable gash above his eye. “He was alone,” she said, and needed medical help.

Bah called 911 to request an ambulance. Within minutes, not only did an ambulance arrive, but so did police officers.

The incident quickly escalated, as officers suspected he had a knife and drew their guns before breaking down his apartment door. Within 30 minutes, Mohamed Bah, 28, was dead — shot eight times by police in his Morningside Heights apartment.

Since her son’s death in 2012, Bah has advocated for police to be removed from mental health 911 calls. And last June, in the same busy neighborhood where her son was fatally shot, Bah’s goals were realized with the city’s creation of a pilot program called the Behavioral Health Emergency Assistance Response Division (B-HEARD).

B-HEARD is one of several initiatives in different parts of the country designed to divert mental health 911 calls to a team of specialists trained to de-escalate crises and provide follow-up care.

“​​We’re responding to someone in crisis,” said Janine Perazzo, a social worker and senior director of B-HEARD. “Every call looks very different. We could be getting a call from someone in their home, special populations, someone with a mental disability or autism, veterans, older persons … on a street corner, at a shelter, and we can sometimes get flagged down, because we’re in an emergency services vehicle,” she said. “People call themselves, or maybe family members have noticed a change in someone’s behavior and are concerned.”

If calls go through 911 operators, they are screened and triaged. Once it’s been determined that the caller is not a serious threat to themselves or others, B-HEARD should be dispatched, though there have been challenges with the program’s implementation. During its first six months, 78 percent of mental health emergency calls in the pilot area were still routed to police.

From the moment the B-HEARD team arrives, de-escalation is their main focus. Teams pull up in an ambulance with their sirens off to keep from drawing a crowd or panicking what social workers consider an already overwhelmed individual.

Once a B-HEARD team approaches the scene, they meet with the caller and the client. They’re trained to stay calm even in a tense and emotional environment.

“Often, police are prepared for things to go terribly wrong,” said Jeff Coots, a public health lawyer and director of the From Punishment to Public Health Initiative at John Jay College in New York. “They need to come in and get control of a situation. Often what that means is shouting — it’s pretty aggressive and abrupt.”

Activists have petitioned for laws that ensure the mandatory presence of mental health workers on all mental health calls to police, instead of relying on an officer’s judgment. The “cry for help” law would be named after Eudes Pierre, 26, fatally shot by officers in December 2021 after he called police while suffering a mental health crisis at a subway station. The NYPD later deemed it suicide by cop.

“Police intervention isn’t the best fit for those with mental illnesses,” said Coots, who has weighed in on the shooting of Pierre and others who may not be able to comprehend the instructions given by officers, such as Deborah Danner, 66, who was shot and killed in her Bronx bedroom by police in 2016.

“They’re perceived by the public as disorderly. But people with mental health issues are statistically more likely to be victims of violence than perpetrators of violence.” — Jeff Coots

EMT personnel were speaking to Danner, who was confused and did not know why first responders were present. Danner panicked when six police officers interrupted, and she ran to the bedroom. Police said Danner was shot twice after she threatened officers with a baseball bat. The sergeant who shot Danner was charged with murder and manslaughter but later acquitted of both charges.

The incident sparked a protest. During the trial, evidence revealed that the officer had not completed crisis intervention training, which instructs police on how to de-escalate mental health calls.

“You have to go in with your eyes open,” Perazzo said. “The approach of the team is that whenever they arrive, their goal is to bring [the situation] down. If you’ve ever been on the scene and EMS has come, it can be chaotic. It really is fascinating, and it’s high energy. But from the moment we get there, we’re trying however we can to bring some calm.”

“B-HEARD teams are often called when someone experiences anxiety or suffers from a panic attack,” Perazzo added. Other calls include someone discontinuing their medications, psychotic episodes, or depression.

And while the public might be concerned that someone who experiences psychosis could become dangerous, Coots explained that these cases are often more complex than they seem.

“We call the police on somebody who’s perseverating, walking down the street and yelling,” Coots said. “They’re perceived by the public as disorderly. But people with mental health issues are statistically more likely to be victims of violence than perpetrators of violence.”

B-HEARD workers are trained to remain composed in these unpredictable situations. Their five-week training program strives to prepare teams for any outcome; social workers learn about basic EMS tools like life support, tourniquets, and CPR training, while EMTs learn about motivational interviewing. 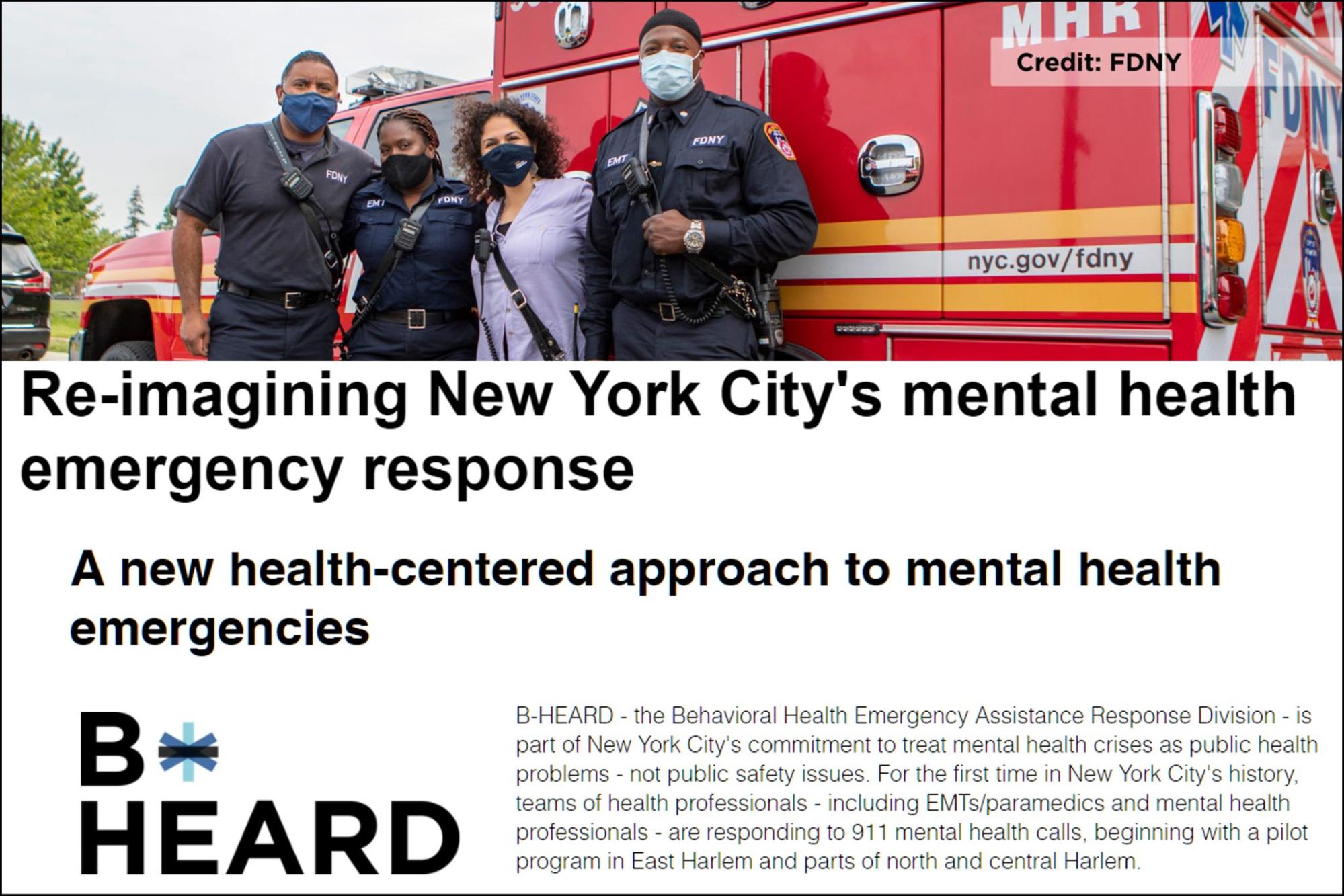 When teams need more input about a diagnosis or appropriate follow-up resources, there’s a network of support available.

“If the social workers are maybe on the fence about a case, they have access to a supervisor as well as a psychiatrist on call,” Perazzo said. “We have a car with the supervisors, the social work supervisor, and the [EMS] lieutenant, and they drive around in the field. Sometimes, they might get to the scene first if they’re closest, but they’re usually called to the scene if there’s a question.”

B-HEARD teams can also call the NYPD for assistance, but have done so infrequently during their six-month existence. Of the 684 calls taken by B-HEARD from June to November 2021, only 34 cases required officers present to transport patients to the hospital — and in these cases, someone may have had a medical emergency in addition to their mental health issue. In others, they could be involuntarily committed for their own safety.

Once the situation has been de-escalated, the individual is offered services that suit their needs. About 46 percent of calls result in a hospital admission, far less than traditional police responses of 87 percent. Another 47 percent were served locally with behavioral health options, such as homeless shelters, community-based healthcare, or social service locations — services that first responders could not utilize prior to B-HEARD.

Additionally, everyone served was offered follow-up care. This includes references to psychiatrists, counselors, shelters, or other resources specific to each case.

However, some health professionals question the legitimacy of programs that remove police from mental health calls. In addition to worrying about the health and safety of social workers and EMS, they are not entirely convinced of the efficacy of these programs due to limited data.

But Perazzo said that hesitancy like this is to be expected — in fact, even those on the B-HEARD teams required an adjustment period.

The FDNY in New York City has implemented the B-HEARD program as an alternative to armed responses to certain types of police calls. Photo credit: Chris Sampson / Flickr (CC BY-SA 2.0)

“There’s lots of EMTs and police that go out, and they’ve done a really good job of making sure they promote the program,” Perazzo said. “But it also happens naturally when they start to get to know each other and some trust is built. I think one of the beautiful things we saw was maybe in the beginning, some skepticism — this is very new, and you’re bringing two cultures together — and what we saw in the end of the training was that a trust was built.”

Coots agreed. “I think that for any workforce there’s a general resistance [to change], and police are not excluded from that cultural phenomenon,” he said.

“But I think that there is a recognition, particularly at the managerial levels of the police force, that these scenarios very often go wrong. And if they can have some additional resources to bring to bear in response when they’re getting mental health calls, the new tools in their toolbelt are welcome.”

Patrol officers echo that sentiment and have grown accustomed to B-HEARD’s presence in their neighborhoods. In fact, one officer said: “It’s just like working with EMS.”

B-HEARD’s goal is for 50 percent of mental health calls to be sent to the program within a year as it looks to expand in Manhattan, as well as into the South Bronx.

And indications are that the effort has the support of the new mayor, Eric Adams, who has emphasized the need for expanding access to mental health services in general. Adams has said that mental health professionals should be the first to respond to emergency mental health calls, except in cases where someone might have a weapon.

Removing police response from mental health 911 calls is a goal for Bah, who advocates in honor of her son. For others, like Danner, who penned a 2012 essay called “Living With Schizophrenia,” a mental health first responder could be the difference between life and death.

“We are all aware of the all-too-frequent news stories about the mentally ill who come up against law enforcement instead of mental health professionals and end up dead,” Danner wrote. “It has never been lost on me that the old adage, ‘There by the Grace of God go I’ could easily be applied to me.”