Who Will Rebuild Ukraine — and Who Will Pay for It?

BUCHA, Ukraine — Chaos and horror met Viktor Dubovyi in early May when he returned to his home here in Bucha, a village north of Kyiv and, until April, the scene of fierce fighting in the ongoing war between Russia and Ukraine.

Pieces of a wrecked Russian BMP infantry fighting vehicle littered the 56-year-old’s yard. Fragments of metal had penetrated his house. Garbage was left everywhere. And lying on his lawn was a dead Russian soldier, apparently blown out of the BMP.

After the Ukrainian military removed the dead soldier and most of the vehicle, Dubovyi and his neighbor, Rustem Usmanov, were left to clean up everything else by themselves when they noticed an unusual smell. It was everywhere, but they could not identify the source. They searched around in the grass and inside the shed. They found nothing, until Dubovyi looked in the drainage of the shed, where he found a piece of a human hand.

“The smell was so bad. I will not forget that smell,” said Dubovyi, who buried the hand — Russian, Ukrainian, it’s impossible to know — in his yard. “It was so horrible what happened here.” 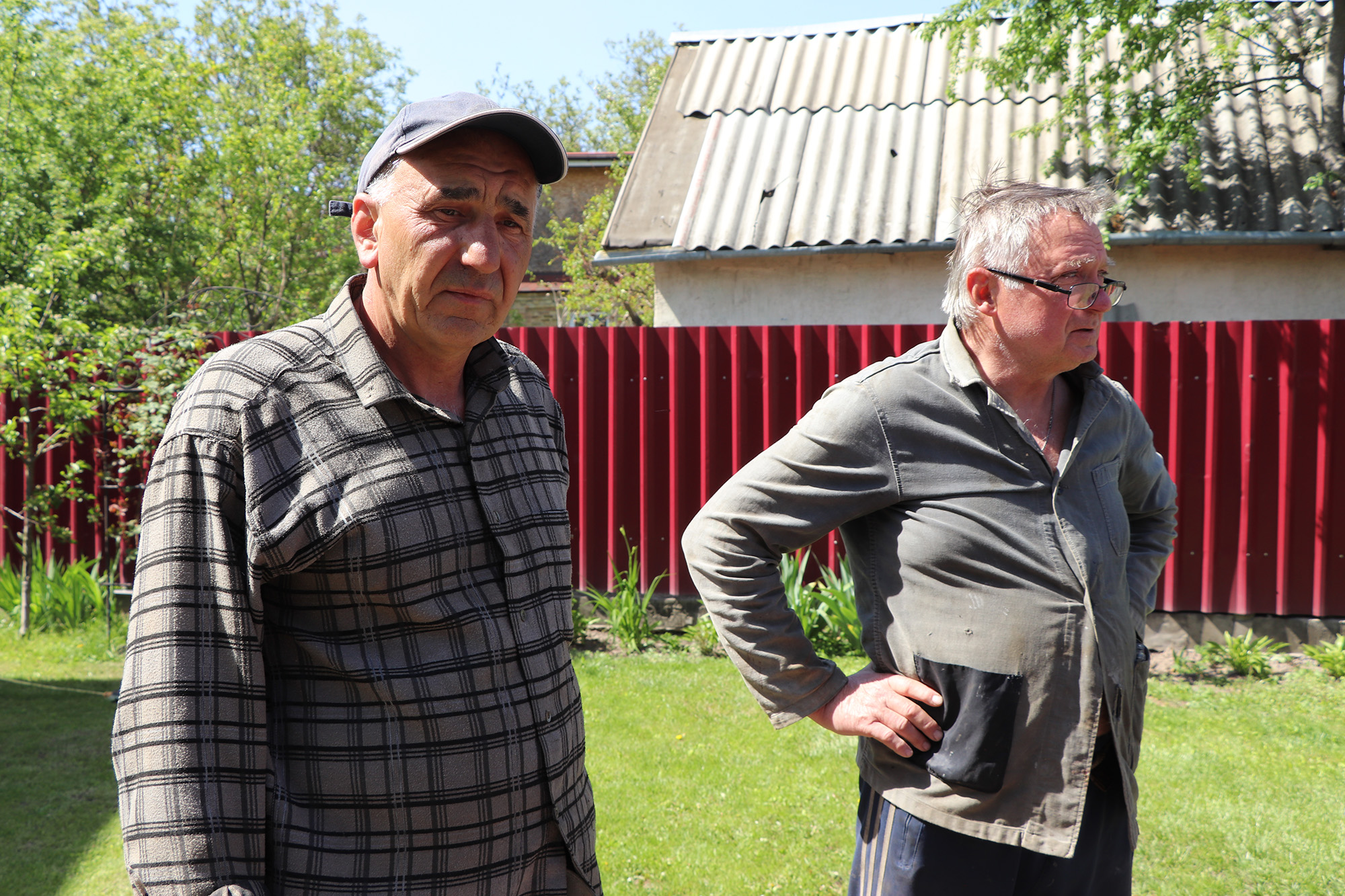 After the hand was disposed of, the smell went away, which left the men to confront an even worse crisis: Their homes are barely habitable, with broken windows boarded up with plastic sheeting and cardboard. And there’s no clear answer as to when or how they’ll be able to fix them.

Along with still-unknown tens of thousands or more military and civilian casualties, Russian President Vladimir Putin’s invasion of Ukraine has also caused a massive housing crisis.

Out of a pre-war population of roughly 41 million people, more than a quarter have had to leave their homes. At least 6.2 Ukrainians have fled the country since the invasion began on February 24, with another 7.1 million Ukrainians internally displaced, according to the International Organization for Migration (IOM).

Though the war is still far from over, many have started to return. In April alone, around 30,000 people migrated back every day, according to the UN Refugee agency, including to areas that a few weeks prior had been brutal war zones like Bucha, also the site of alleged civilian executions and other possible war crimes. Only about 3,000 people out of Bucha’s pre-war population of 53,000 stayed during the month-long Russian occupation, but about 16,000 have since returned, Bucha Mayor Anatoliy Fedoruk previously told National Public Radio (NPR).

But what they’re returning to — aside from grisly discoveries and wrecked homes — is very little. In Bucha alone, more than 1,000 buildings are damaged, Fedoruk said, and until the war ends, citizens are on their own to figure out how to make their homes habitable and lives livable.

“It’s really hard to rebuild in a wartime,” Fedoruk said. “First, we need to finish the war, and then we will be able to go with a full-scale rebuilding.”

In the meantime, Bucha’s returning citizens like Dubovyi and Usmanov are left to make do with what they have on hand — which is very little. Though the Ukrainian government has promised a massive public rebuilding campaign, Usmanov hasn’t seen a single hryvnia yet and is starting to worry help will never come.

Usmanov shows a visitor his blown-up garage, where his car — now a burned-out hulk covered in metal scraps — is still parked. He’d hid his life savings inside the car, in order to be ready to evacuate. Then, one day, an artillery shell hit the garage and blew up everything.

“Like many others, we have nothing left,” he said. “We cannot afford to repair our homes. We have our hands, they work, but we don’t have money for material.”

To underscore the point, Usamov and Dubovyi have “boarded” up their broken windows with the best materials available: pieces of cardboard and plastic sheets.

“We are promised help, but nothing is coming. We are pensioners; what can we do?” Dubovyi added. “I fear that the money will never come, and we will spend the winter like this.” 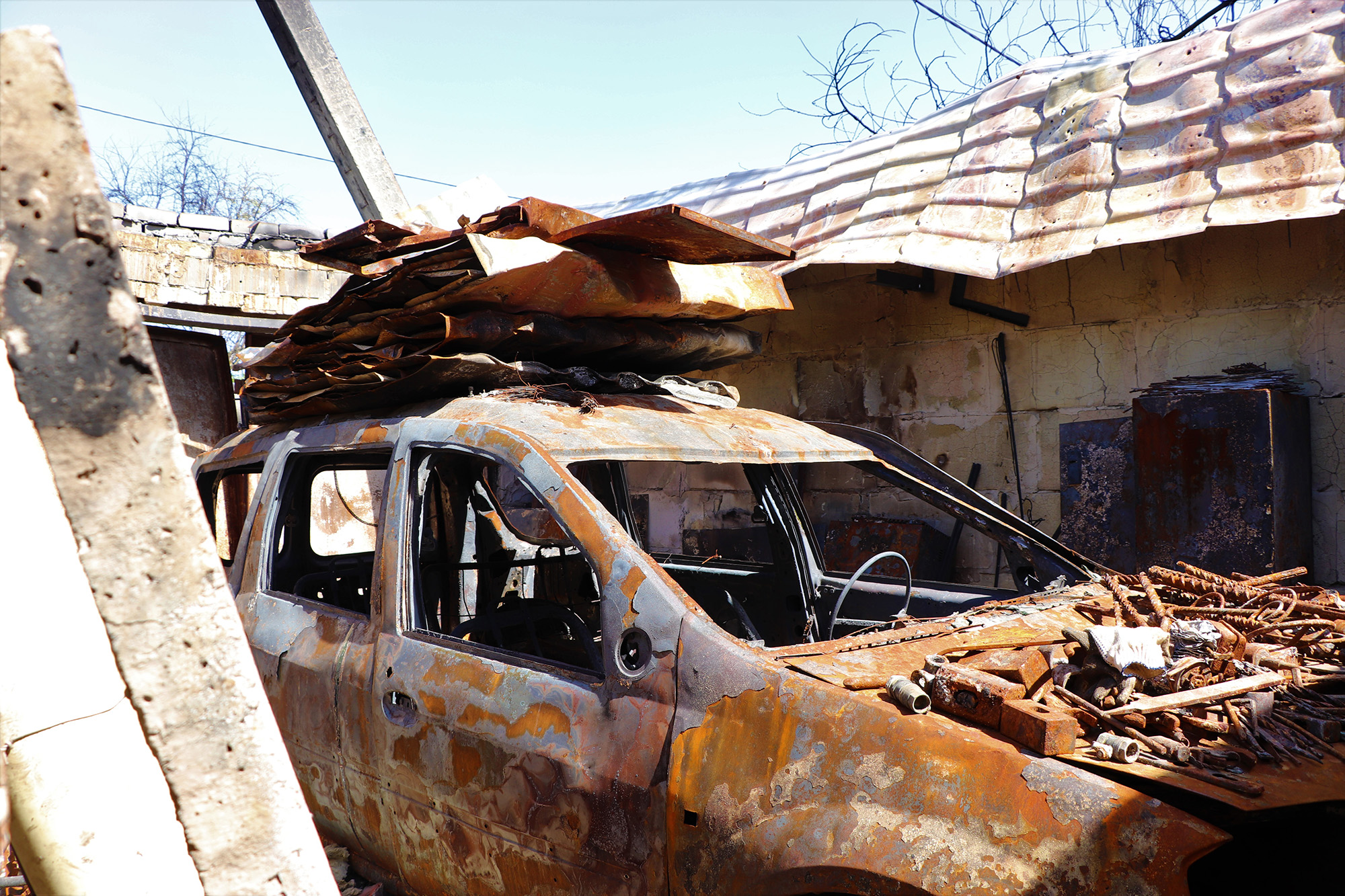 Usmanov’s garage was blown up. All his cash was inside. Photo credit: Stefan Weichert / WhoWhatWhy 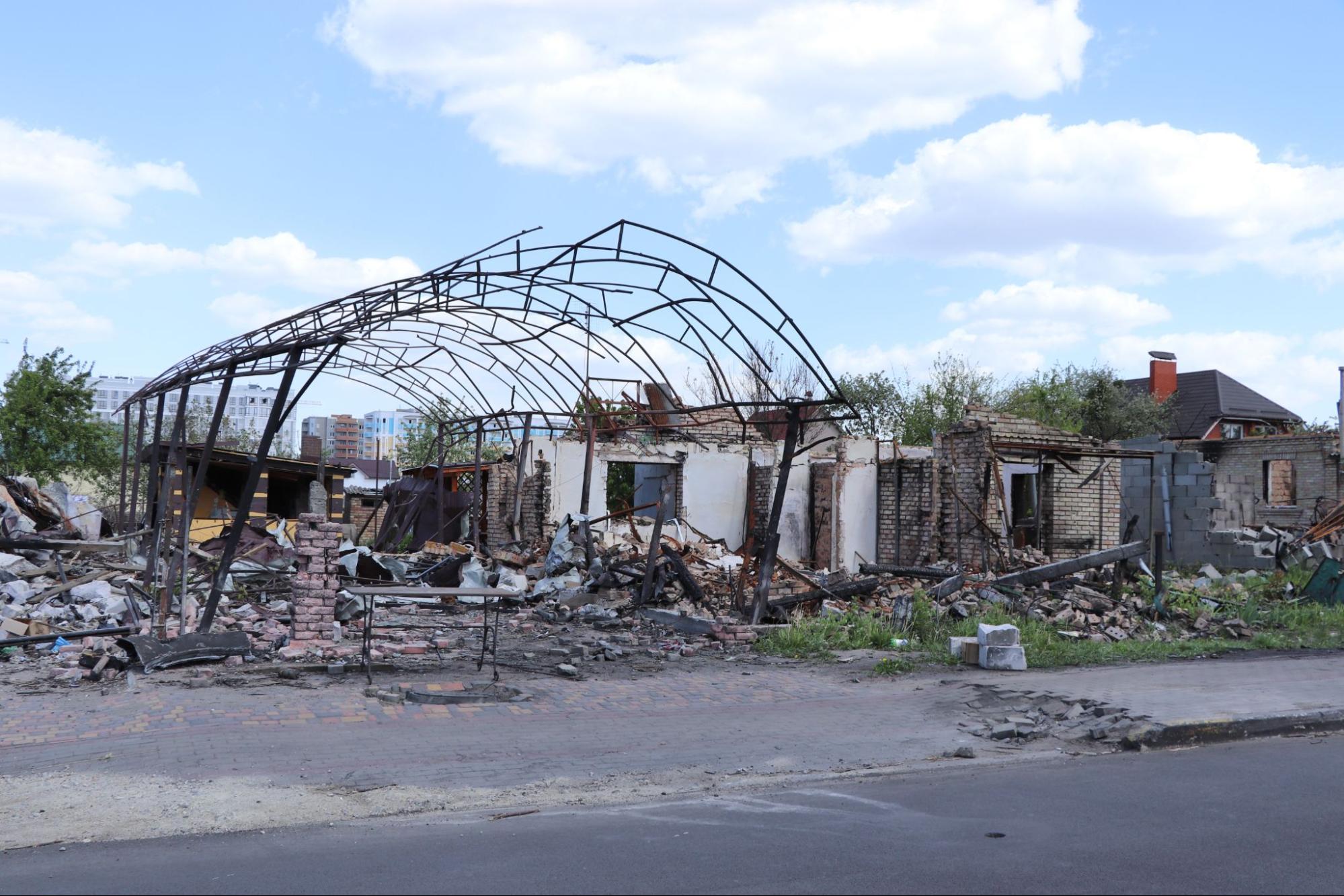 To date, property damage in Ukraine is estimated at $565 billion, according to Ukrainian Prime Minister Denys Shmygal.

Owners of destroyed property can submit an application to the Ukrainian Ministry of Finance to receive economic help. Inspectors will visit people and assess the damage before funding is released. It’s unclear if this process has begun, with most attention to date paid to restoring basic services like electricity, heat, plumbing, and internet access.

A separate law providing compensation for damage and destruction is still being considered in the Ukrainian parliament, but already President Volodymyr Zelenskyy’s government has made it clear that Ukraine will not be able to rebuild itself — and will need help from other countries before it can help citizens like Usamov. 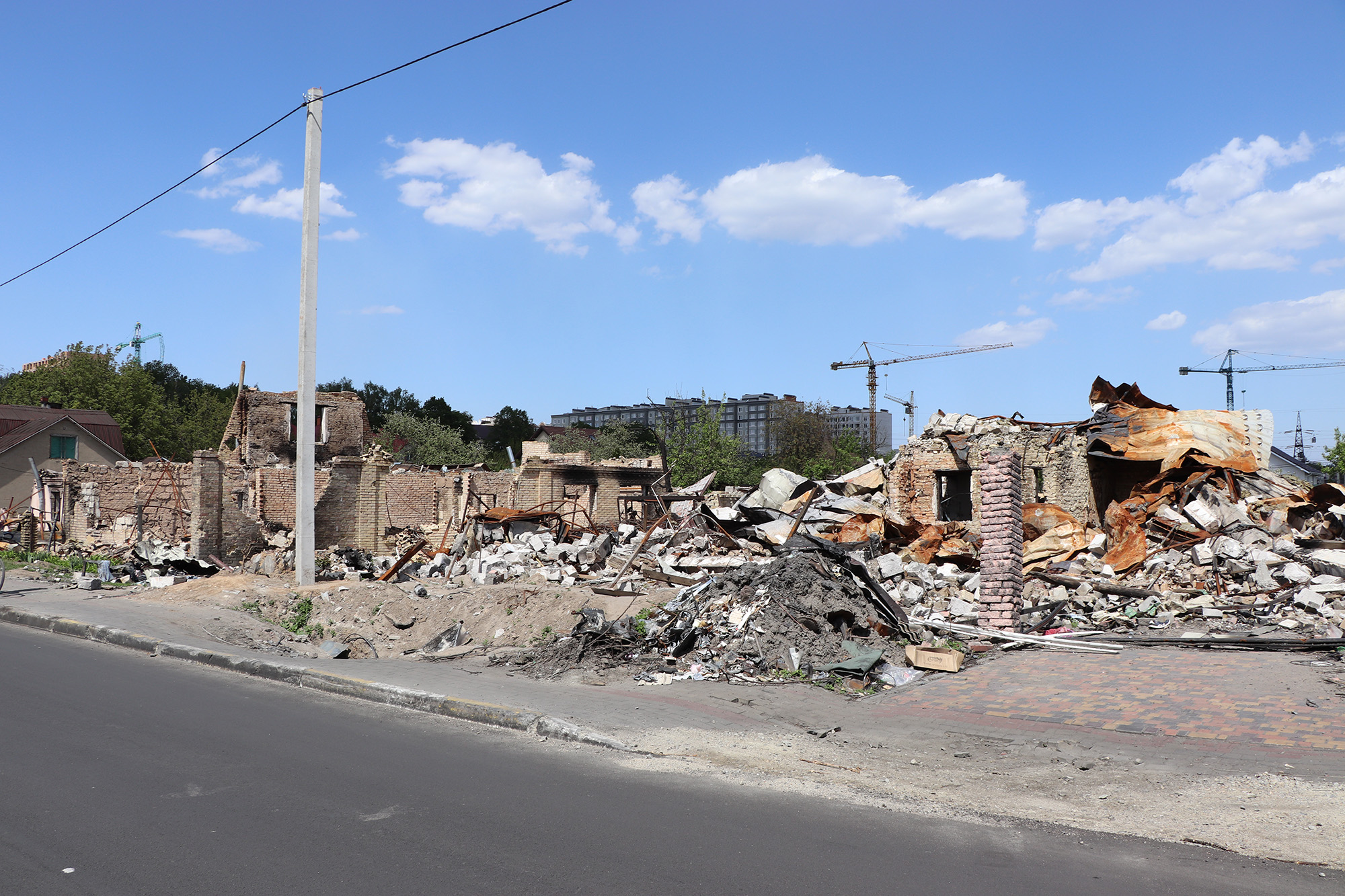 Help Is on the Way… But When?

Lawmakers in the US, UK, and the EU have all pledged to help Ukraine rebuild, but even as the US Congress approves a new $40 billion aid package, they have not pledged rebuilding funds. The package includes weapon support, economic help to Ukraine, and humanitarian help to the thousands of refugees, but doesn’t specifically mention rebuilding.

Instead, there has been talk about using seized Russian assets to fund it.

“We’ve asked our own lawyers to look at what authorities would be needed potentially to seize those assets, but not only to seize them but to use them” to rebuild Ukraine, US Secretary of State Antony Blinken told the House Foreign Affairs Committee in April.

Since the war broke out, Western governments have frozen $300 billion of Russia’s foreign currency reserves and seized property, yachts, and other valuables identified as belonging to Russian oligarchs.

Josep Borrell, the EU’s foreign policy chief, suggested in May that European governments “should consider seizing frozen Russian foreign exchange reserves to help pay for the cost of rebuilding Ukraine after the war,” which he estimated could cost “hundreds of billions of euros.”

The White House also presented a plan in late April “to send a proposal for a comprehensive legislative package that will enhance the United States Government’s authority to hold the Russian government and Russian oligarchs accountable for President Putin’s war against Ukraine.” It included using frozen assets to support Ukraine.

However, it is still uncertain when and how much money will be provided to Ukraine to rebuild the country. Experts have highlighted that there could be legal issues with using the frozen money for reparations.

Where Is the Help?

Back in Bucha, many doubt the financial help will ever arrive. They are worried, even in the early summer months, they will have to make it through the winter without a roof or windows. They argue that time itself will only do more damage to their properties, especially when it gets cold or when it rains.

Mykola Zabarylo, 76, was having his gate repaired when WhoWhatWhy visited. He said that he used his savings to fix it after a Russian tank blasted through it in February. Zabarylo stayed in Bucha to make sure that nobody would destroy his property.

“The Russian soldiers just came here, and I asked them,‘Why are you here?’” he said. “They said they are here to free me from all the Banderas,” a reference to Putin’s unfounded claim that Ukraine is run by Nazis and fascists, and that the war is a “special operation” to “de-Nazify” the country. 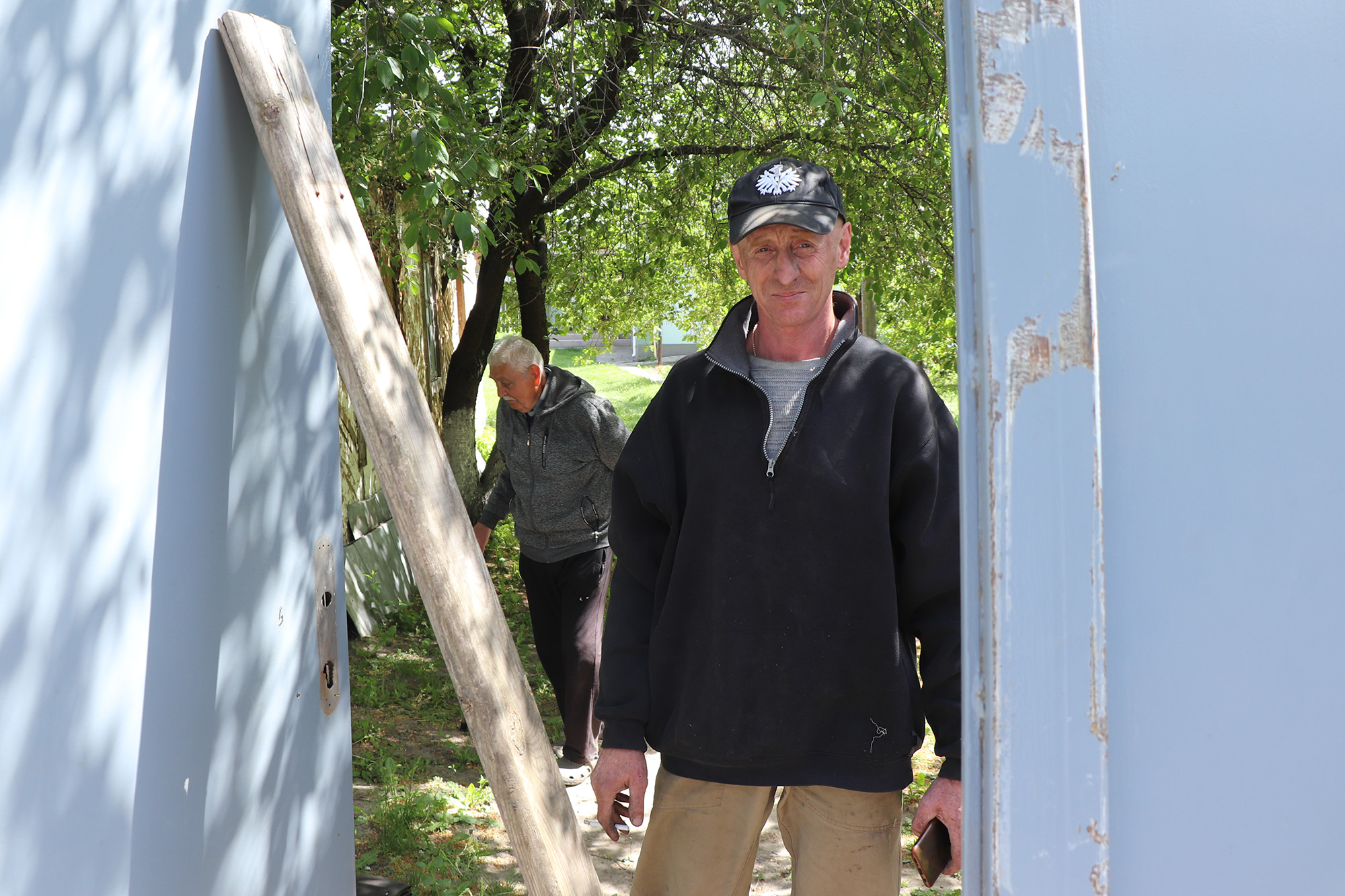 Mykola Zabarylo (left in rear), 76, is having his gate fixed. A Russian tank drove through it, he said. Photo credit: Stefan Weichert / WhoWhatWhy

Ukrainian ultranationalist Stepan Bandera, who died in 1959, is known by many Ukrainians for his fight for independence from the Soviet Union. Others, in Russia and abroad, revile him for his collaboration with Nazi Germany during World War II.

“I told them that we are free here and that we don’t have these Banderas,” Zabarylo added. “The soldiers said that there are many. I didn’t respond anymore. I heard about what happens to people who push too much. They were killed.”

After the Russian withdrawal, more than 1,000 civilians were found dead in Bucha, including 650 who were apparently shot by the Russians, according to the local police. Many were found dead with their hands tied behind their backs. The Kremlin has denied having anything to do with the war crimes, which are being investigated by the International Criminal Court (ICC). These killings have been met with a fierce response from the West. Less fierce has been the West’s direct response to Russia’s methodical leveling of civilian housing in cities like Mariupol, as well as villages like Bucha.

Zabarylo also fears that there will be no money for repairs. These concerns are shared in nearby Hostomel, where whole apartment blocks are entirely destroyed. 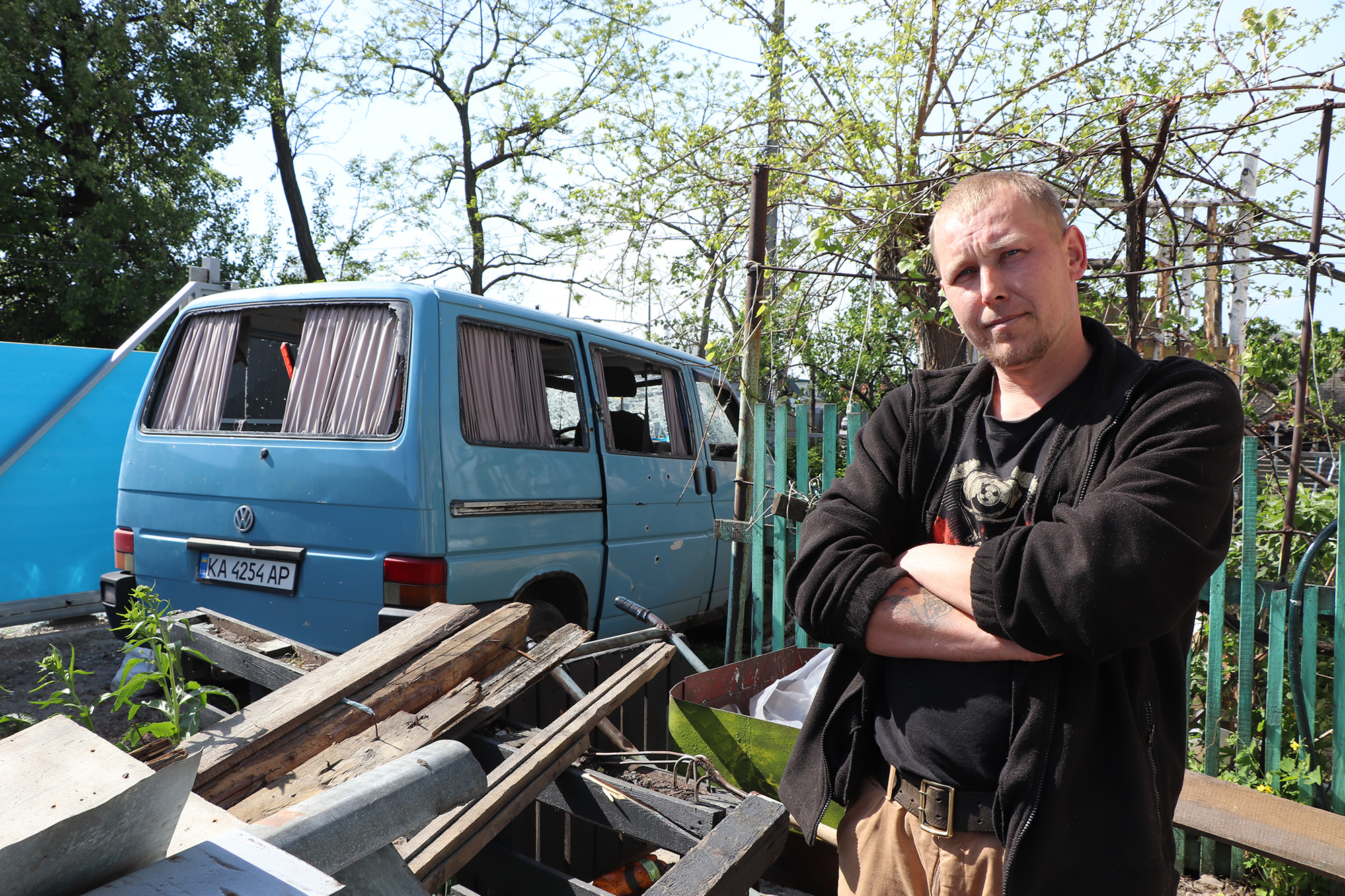 Volodymyr Babiy, 34, came back to find his house in Hostomel destroyed. He is afraid that the Russian soldiers will come back home. Photo credit: Stefan Weichert / WhoWhatWhy

Volodymyr Babiy, 34, returned to find a big hole in his roof, and all the windows smashed. The heating doesn’t work anymore, so he has dragged an oven inside.

“For most of us, it is just too expensive to fix it ourselves,” he said. “We can provide the labor, but we need the materials,” he said. “But maybe the government is just afraid to start rebuilding now.”

That also means that for now, Babiy is by himself. “My family is still in Poland because I fear that the Russian orcs will come back,” he said, using an increasingly common ethnic slur that’s become in vogue since the invasion.

He also realizes that any rebuilding work he does now may be for naught if the war returns.

“I will try to rebuild my house, but I know that it can all be for nothing,” he said. “Russia might come back and it will all be destroyed again.”

In Hostomel, north of Kyiv, Ludmyla Fredrikson, 68, and her husband have been back home for three days. They live in a small house with broken windows and several fragment holes. Her husband is removing glass from the walls and on the floor before they will have a carpenter come and give a full assessment of the damage.

During the evacuation, she and her husband had to leave their two Bernese mountain dogs behind. They threw some food on the floor before leaving the dogs to live alone in the house for a month. Meanwhile, next door, a bomb strike destroyed their neighbor’s roof, rendering the home uninhabitable. Another neighbor, who refused to evacuate, discovered two young Russian soldiers living inside Fredrikson’s house, looking for food and clothes to wear. Somehow, the dogs survived. 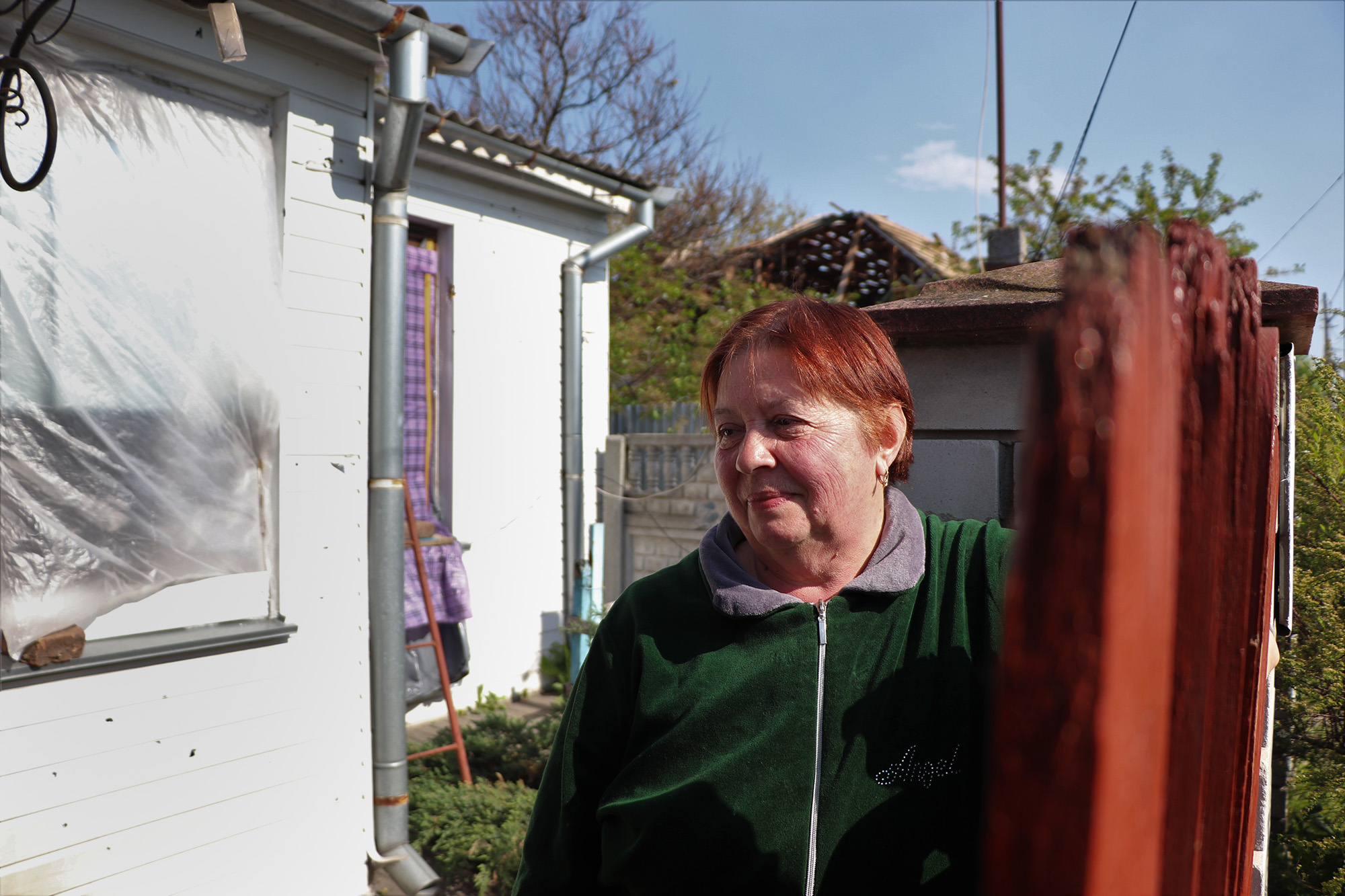 Ludmyla Fredrikson, 68, came back three days ago. She hopes for financial help but doesn’t think that it is realistic. Photo credit: Stefan Weichert / WhoWhatWhy

Fredrikson said that she hopes that everything will be able to go back to normal. But she doubts it. Government money or foreign aid can rebuild homes, but the mental wounds that everyone is carrying around are another matter.

She heard a story about a young woman on the street who was shot while evacuating with her small child. Such reports are circulating everywhere.

“I cannot forgive the Russians,” she said. “I think that it will take a few generations before anyone can forgive them. So many have lost relatives.”

But before any emotional healing can begin, the physical rebuilding must come first. And that, she worries, may take a generation as well.

“We haven’t heard anything from the government yet. I am not sure that we will,” said Fredrikson, “But the most important thing is that we are still alive.”