SIVERSK, Ukraine — “They’re going to come soon,” the glum Ukrainian soldier said, as he gestured towards the massive plume of black smoke in the distance, in the direction of the embattled city of Lysychansk.

His colleague, a 50-something in camouflage trousers and a bright blue vyshyvanka, the traditional Ukrainian embroidered shirt, climbed down from the dirt mound from which he was observing the horizon to greet us, his AK-74 assault rifle slung over his shoulder. The man told us his unit had just been ordered to fall back from the area of Severodonetsk, Lysychansk’s twin city, and had arrived here in the morning.

“Here” is a small town of just over 11,000 inhabitants located on the strategic Bakhmut-Lysychansk highway. Following Friday’s announcement that the last Ukrainian defenders of Severodonetsk were to retreat after a month of brutal close-quarters combat, Siversk is expected to become part of Ukraine’s next line of defense against the Russian onslaught.

“Unfortunately, we will have to withdraw our troops from Severodonetsk because it makes no sense to remain in positions that have been shelled for months,” Serhiy Hayday, the head of Luhansk’s regional administration, said in a video address posted on Telegram on Friday.

Once a city of 100,000 people and one of the last Ukrainian strongholds in the Luhansk oblast, weeks of relentless Russian shelling have leveled Severodonetsk, where, according to Hayday, 90 percent of the city’s buildings have been either damaged or destroyed. 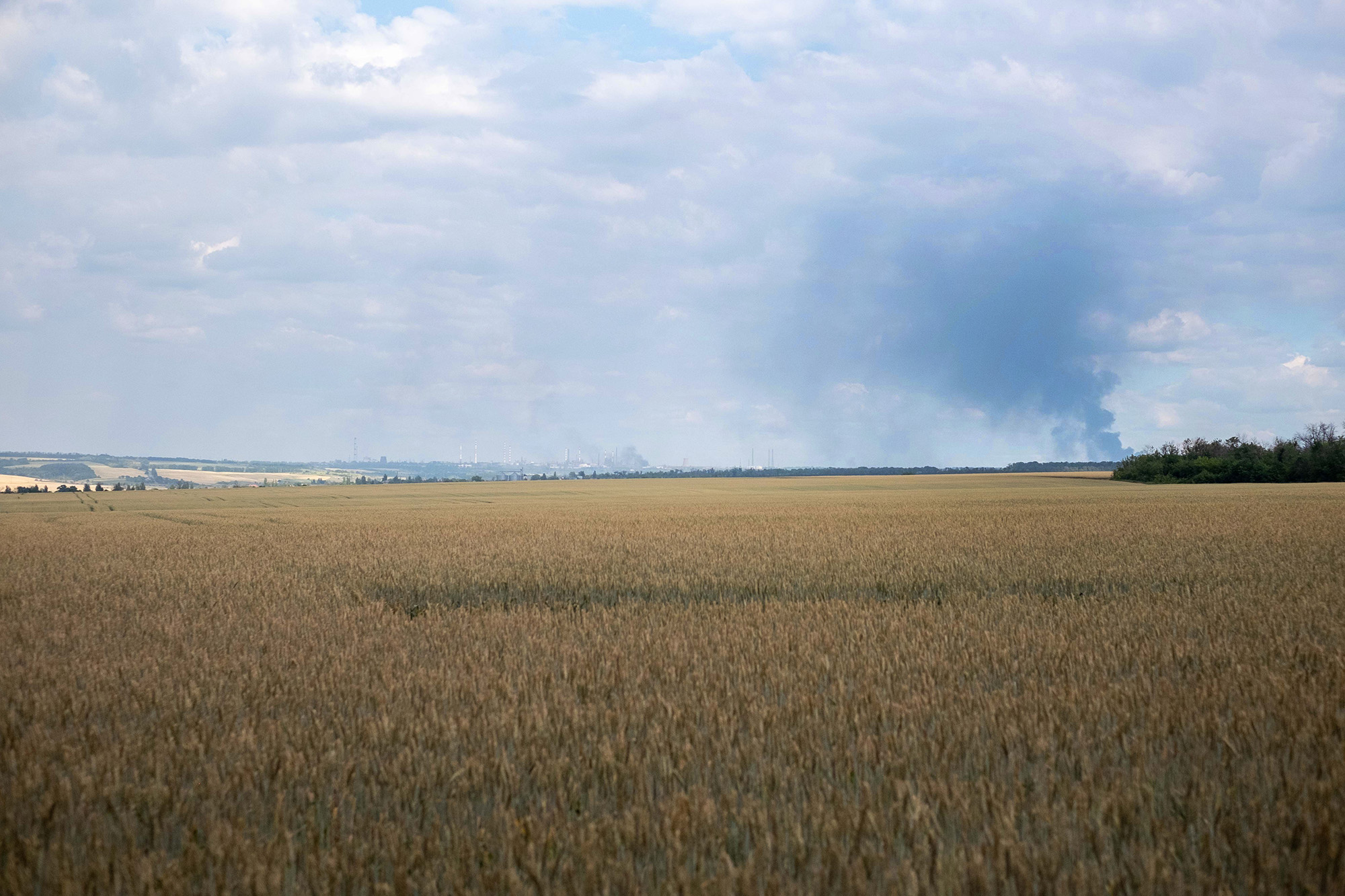 On the outskirts of Siversk, smoke can be seen rising from the direction of Lysychansk. Photo credit: Bryce Wilson / WhoWhatWhy

On Friday, my Australian colleague Bryce Wilson and I had decided to head to Siversk to observe the withdrawal of Ukrainian troops. Just before noon, we made our way to a steep hill on the outskirts of town, from which the smoke of countless fires could be seen billowing over the horizon. A constant stream of mismatched pickup trucks, military vehicles, and hastily spray-painted Ladas drove past us while we snapped some pictures.

As we stepped off the potholed road and into a large field of gold-colored wheat, the distinct sound of outgoing MLRS (multiple rocket launcher) fire echoed in the distance. Six luminous arrows shot up towards the sky, leaving a fleeting trail of smoke behind them. A couple of miles down the road, a Ukrainian self-propelled howitzer sputtered toward us, away from Siversk. A crew member waved at us as it passed by.

As the war enters its fifth month and Russia refocuses its offensive in the east of the country, fighting has turned into a grinding battle of attrition. Despite the ongoing delivery of modern artillery to Ukraine by its western partners — most notably the US — Ukrainian forces in Donbas are still heavily outgunned by Russia. According to Ukrainian officials, daily casualties could be as high as 200 soldiers killed and 500 wounded. 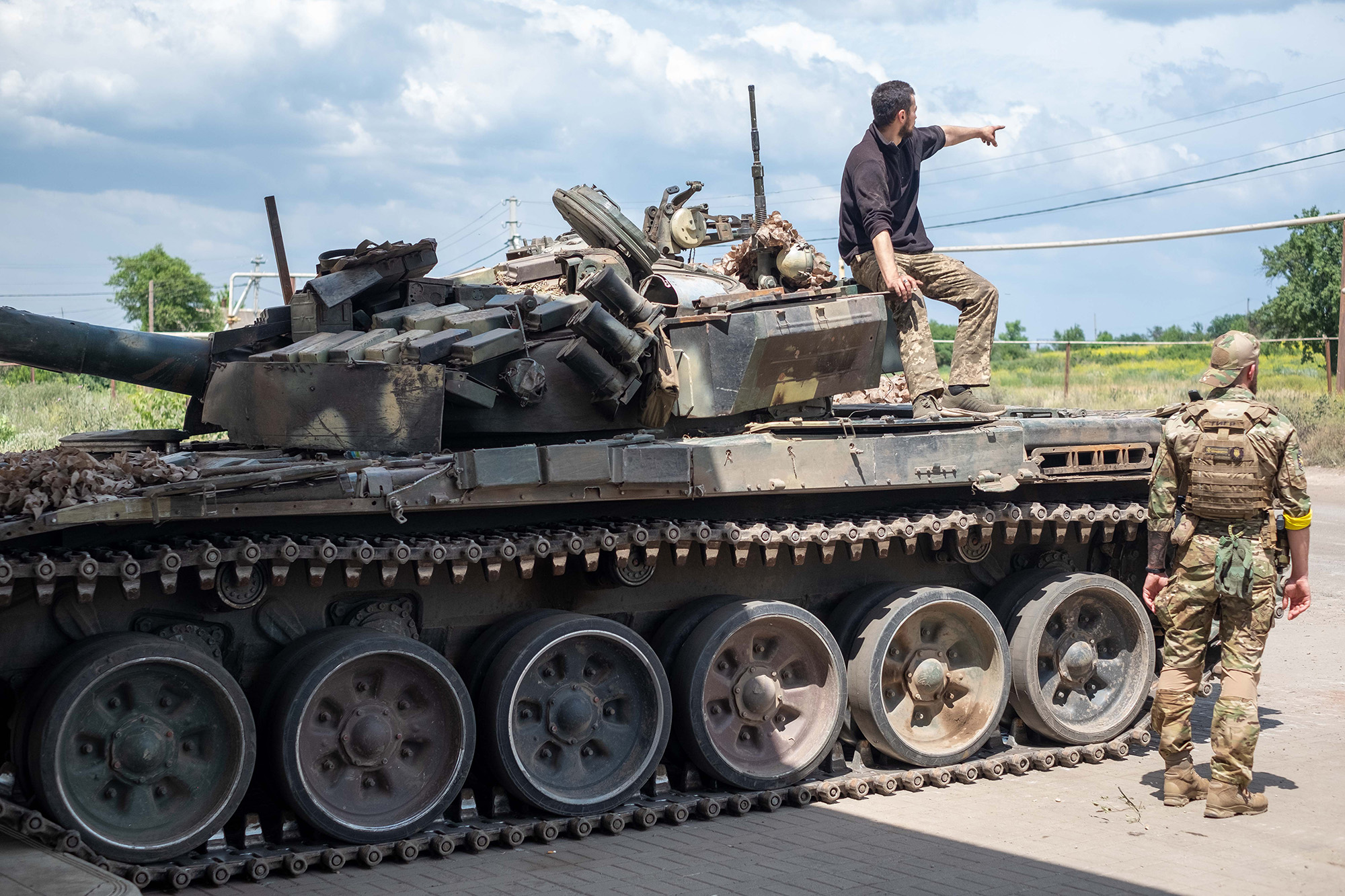 At the entrance to Siversk, a pair of soldiers were repairing a tank at a blown up gas station. “It was pulled out from a river,” a pair of local journalists working with a Portuguese TV crew told us. The acrid smell of smoke lingered in the air, and shelling could be heard regularly in the distance.

Around us, most of the townspeople seemed indifferent: Some tended to their gardens, others were sitting on benches in front of their houses. Many of them waved at us as we drove further into the town.

At an intersection, we parked our car and flagged down an older gentleman on a bright red moped. His name was Vitali. A native of the city, he told us he was afraid of a potential Russian occupation, but that he saw little benefit to the growing presence of Ukrainian troops in Siversk.

“They tell us that the Russians are going to come here and pillage everything, which may be true, but the Ukrainian soldiers are doing the same,” he said. According to Vitali, some of the soldiers stationed in the town had been ransacking houses, requisitioning civilian vehicles, and stealing food and electrical appliances. “Who are we to believe?” he asked.

Soon, a small group of mostly older locals gathered around us. “Are you going to tell the truth about what is happening, or are you just going to write some propaganda?” one defiant woman asked. They told us that they felt abandoned by the Ukrainian government: Electricity had been cut off two months ago, while water and gas were not available.

“We had to beg the authorities for them to send garbage collectors,” Vitali said. “We told them, ‘If the shelling doesn’t kill us, we’ll drown in garbage.’”

Asked about the flow of vehicles coming in and out of their town, another older woman sitting in front of a blown out apartment block sighed. “They’re all military, and there are many of them today,” she said. “God knows where they’re going.”

As we reached the northern edge of the city, a volley of Grad rockets landed nearby. The fearsome Russian weapons had been hitting the surrounding area “once or twice a day,” according to the soldiers we had spoken to earlier.

While we smoked a cigarette, the younger of the two soldiers had acknowledged the serious imbalance in firepower in the region, and that they had to pull out under constant shelling from the Russians. His faith in Ukraine’s final victory, however, was still intact.

“We’re going to win, sooner or later,” he said. “The only question is how many of us are going to die in the process.”

Already hailed as a momentous victory by Russian media, the battle of Severodonetsk might turn out to be a pyrrhic one for Vladimir Putin: According to the Institute for the Study of War, a Washington-based think tank producing regular reports on the evolution of the conflict, Ukrainian forces have “fundamentally accomplished their objective” in Severodonetsk by “slowing down and degrading Russian forces,” and they are now expected to retreat to more defensible positions on the left bank of the Siverskyi Donets river.

As we started to head back towards Bakhmut, a number of armored personnel carriers drove past us towards Lysychansk, and a truck towing a US-supplied M777 howitzer made its way to a forest to the north of the city.

If the battle for Severodonetsk is now over, the one for Siversk seemed just about to begin.