KHERSON, Ukraine — The flag rose slowly, flapping gently in the wind, keeping time with the Ukrainian national anthem playing from a loudspeaker. An honor guard of Ukrainian soldiers stood at attention opposite the flagpole. Ukrainian President Volodymyr Zelenskyy stood between the two, watching Ukraine’s gold and blue with rapt attention, hand on his heart.

The flag-raising ceremony on November 14, accompanied by cheers of joy from the assembled crowd of thousands, marked Kherson’s official liberation from Russian forces and a new day for the city after more than nine months of brutal occupation.

After Russian forces left Kherson on November 11, the fear that had clouded the city for months evaporated into jubilation. Local people hugged soldiers, giving them bouquets of yellow flowers. Children approached them asking for selfies and for autographs in their notebooks and on Ukrainian flags.

The scars of occupation remain, however.

Olga Federova, a 33-year-old English teacher at the Kherson Maritime Academy and mother of a four-year-old, explained that during the occupation, there was an information vacuum that the Russians filled with radio broadcasts and newspapers rife with false information. That all changed during the third week of October, Federova said. 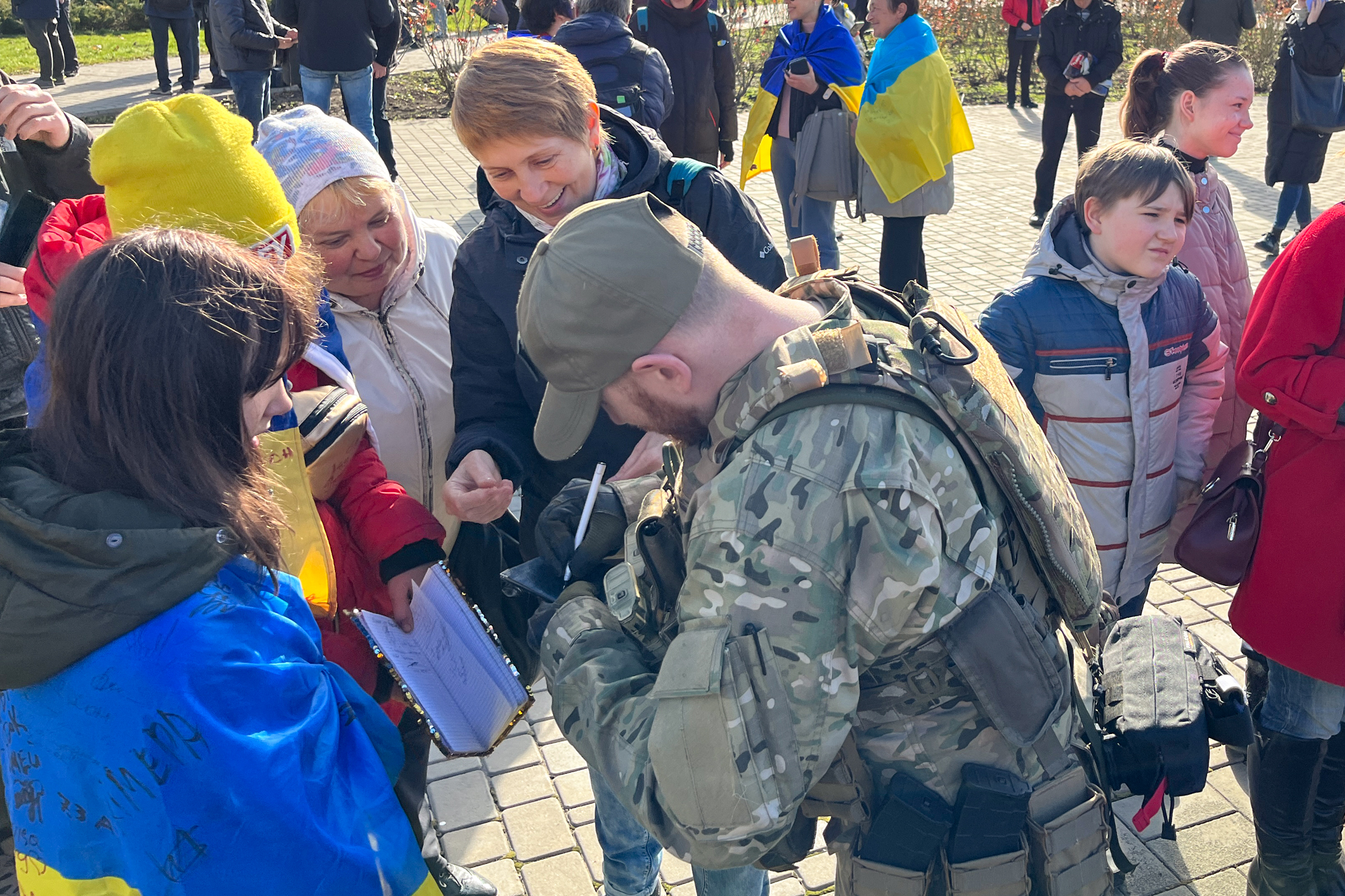 That’s when Russian propaganda radio ceased broadcasting altogether, and the city entered an information blackout that forecast its liberation. “We understood that the Ukrainian Army must be close,” Federova explained.

It was a lot closer than many people expected.

“Quite sudden” is how Vitaly, a retired 71-year-old former instructor at the Kherson Maritime Academy, described the city’s liberation. He was at a local supermarket looking for batteries for his flashlight when he heard a roaring vibration outside.

Vitaly peered out the shop windows, where he saw a long column of vehicles, Ukrainian flags flying. He ran out of the shop and into the street to welcome the soldiers with hugs and handshakes.

“I began to cry, I jumped up and down — I felt young again,” Vitaly said, trembling with emotion at the memory. “There were tears in my eyes.” 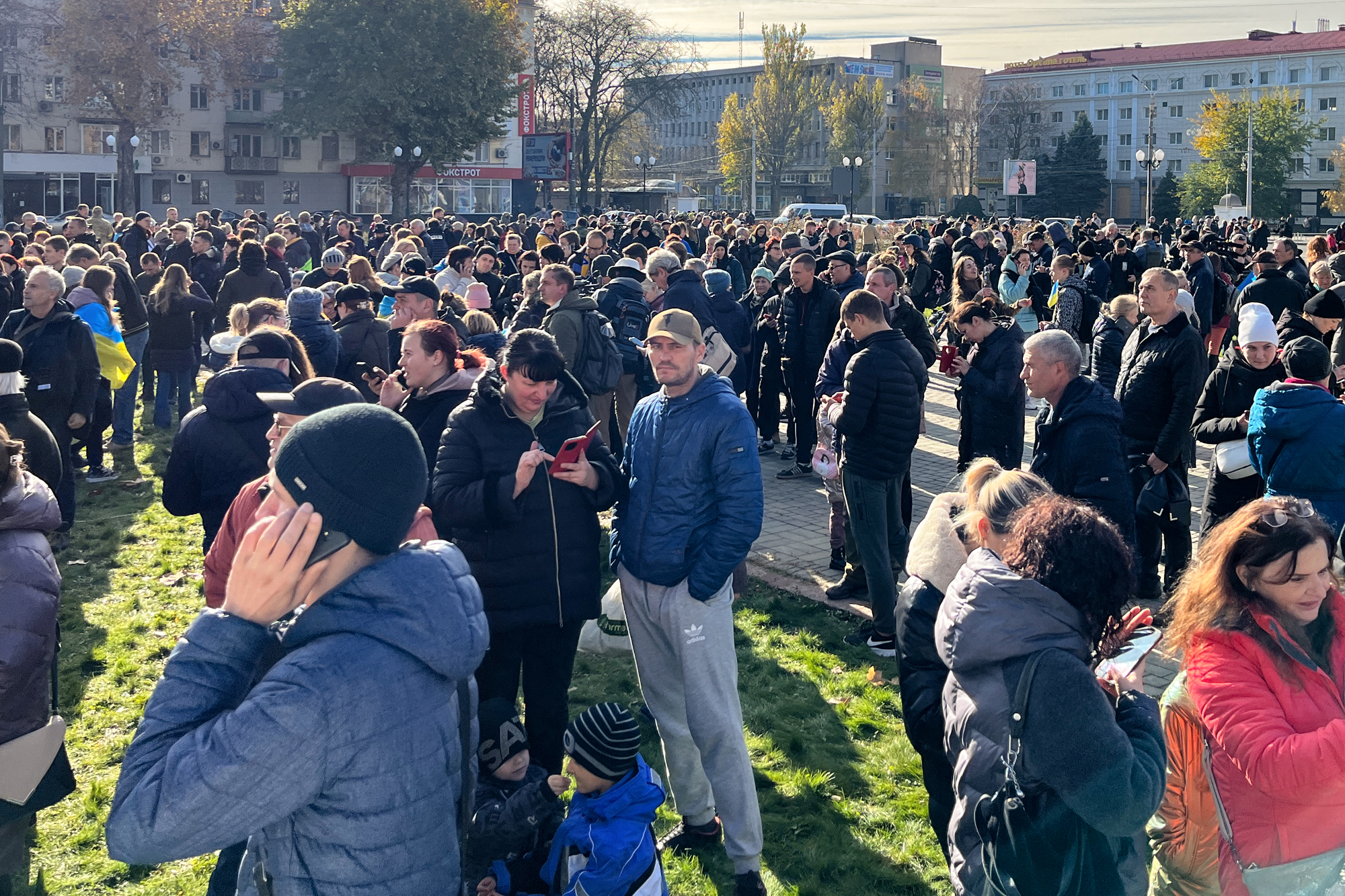 After Zelenksyy’s speech on November 14, telecommunications personnel switched on a mobile, trailer-mounted cell phone tower. People in the crowd needed no urging to dial their friends and relatives.

They jumped for joy, shrieked in disbelief, and shook, openly weeping as they contacted loved ones, in some cases for the first time since early March when Russian forces took the city. 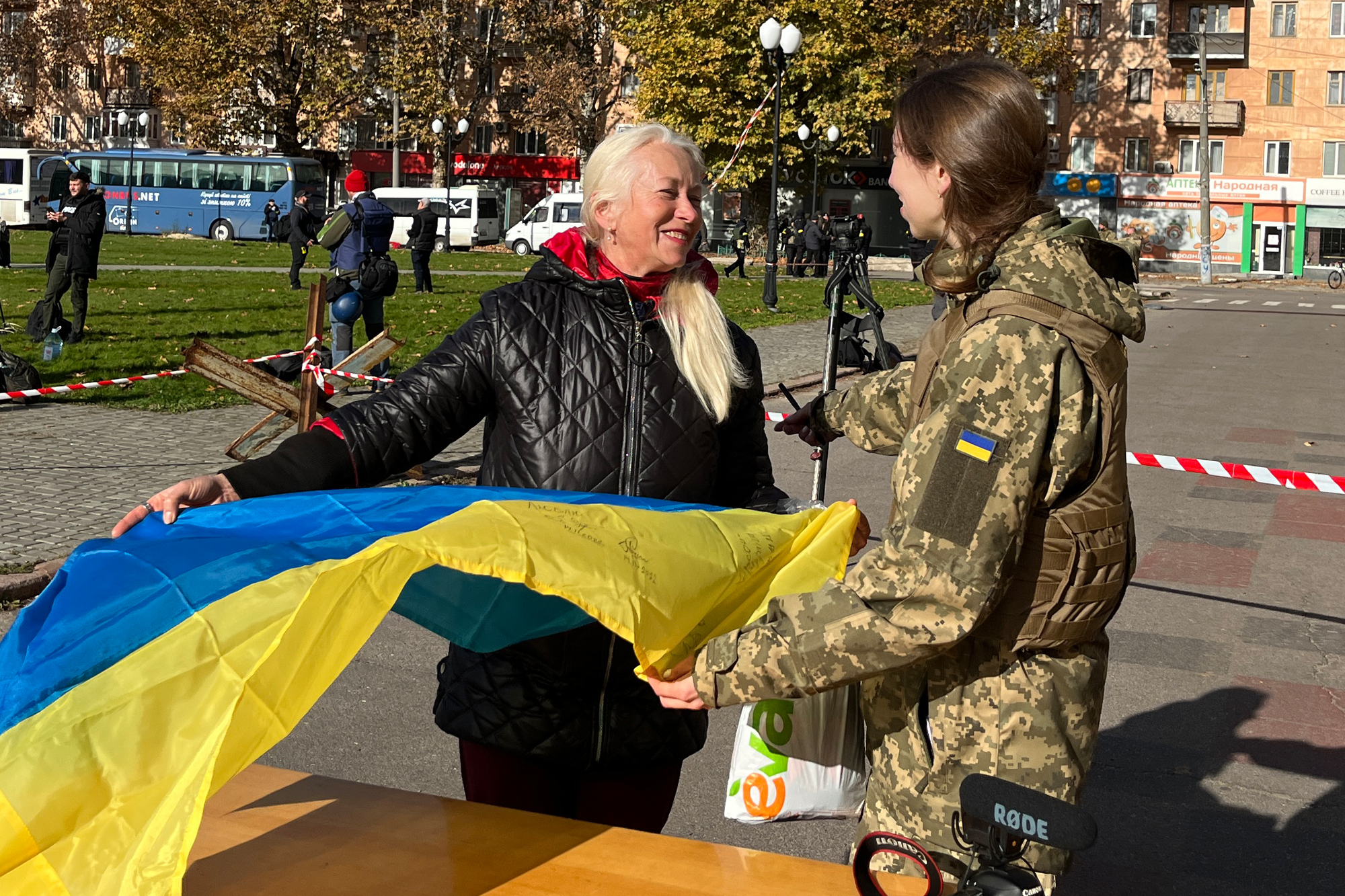 While Kherson’s contact with the outside world is slowly improving, more basic needs are not.

During WhoWhatWhy’s recent visit to Kherson, residents plunged buckets and plastic containers into the Dnipro River that runs along the city’s eastern bank, collecting water for cooking and cleaning. Electricity also has not yet been restored, and internet connectivity is intermittent.

While the water gatherers worked undisturbed that day, they could easily be seen by Russian forces which controlled the Dnipro’s forested western bank.

There are other, even more dangerous concerns.

This is a pretty difficult job, but the police occasionally catch lucky breaks.

Two days after Zelenskyy’s address to the city, a group of officers stopped and questioned a shabbily clad man on a nearby street. After a few brief questions, the officers searched the man’s belongings, uncovering documentation that led to his arrest.

In the man’s pocket, the officers found a brand-new Russian passport, evidence of collaboration with Russian forces. After hustling the man into a nearby police van, the officers photographed the passport and continued their patrol. 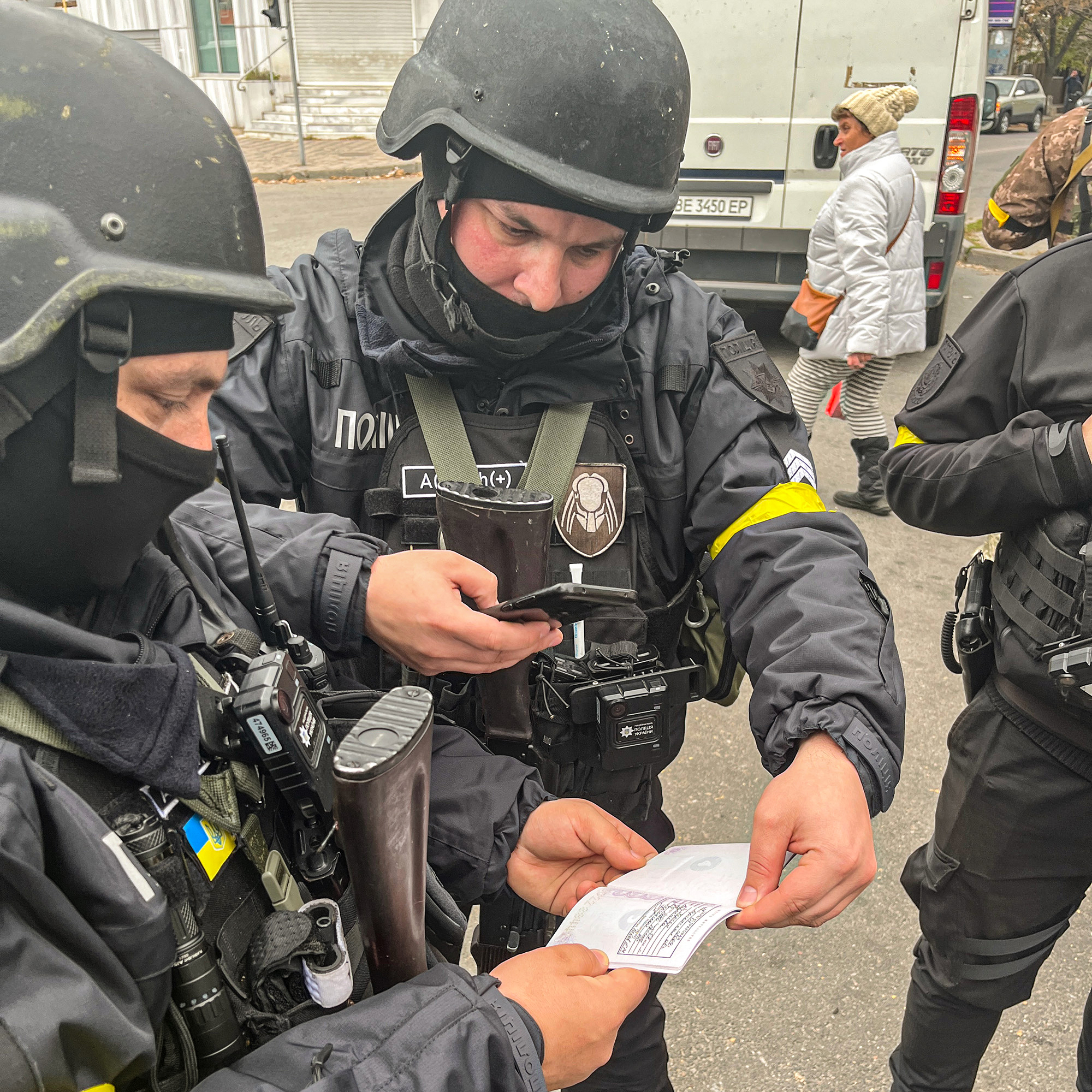 Kherson’s civilian infrastructure — its houses, apartment buildings, and administrative offices — are nearly intact. The same cannot be said for the city’s outskirts, especially its back roads and agricultural fields. There, the Russians left behind many mines and booby traps, according to Maria Kopian, a spokeswoman for the demining operation around Kherson. Demining crews from the National Guard and National Police have suffered “at least 25 to 30 casualties” during accidental explosions around Kherson, and civilians have also been hurt, Kopian said. 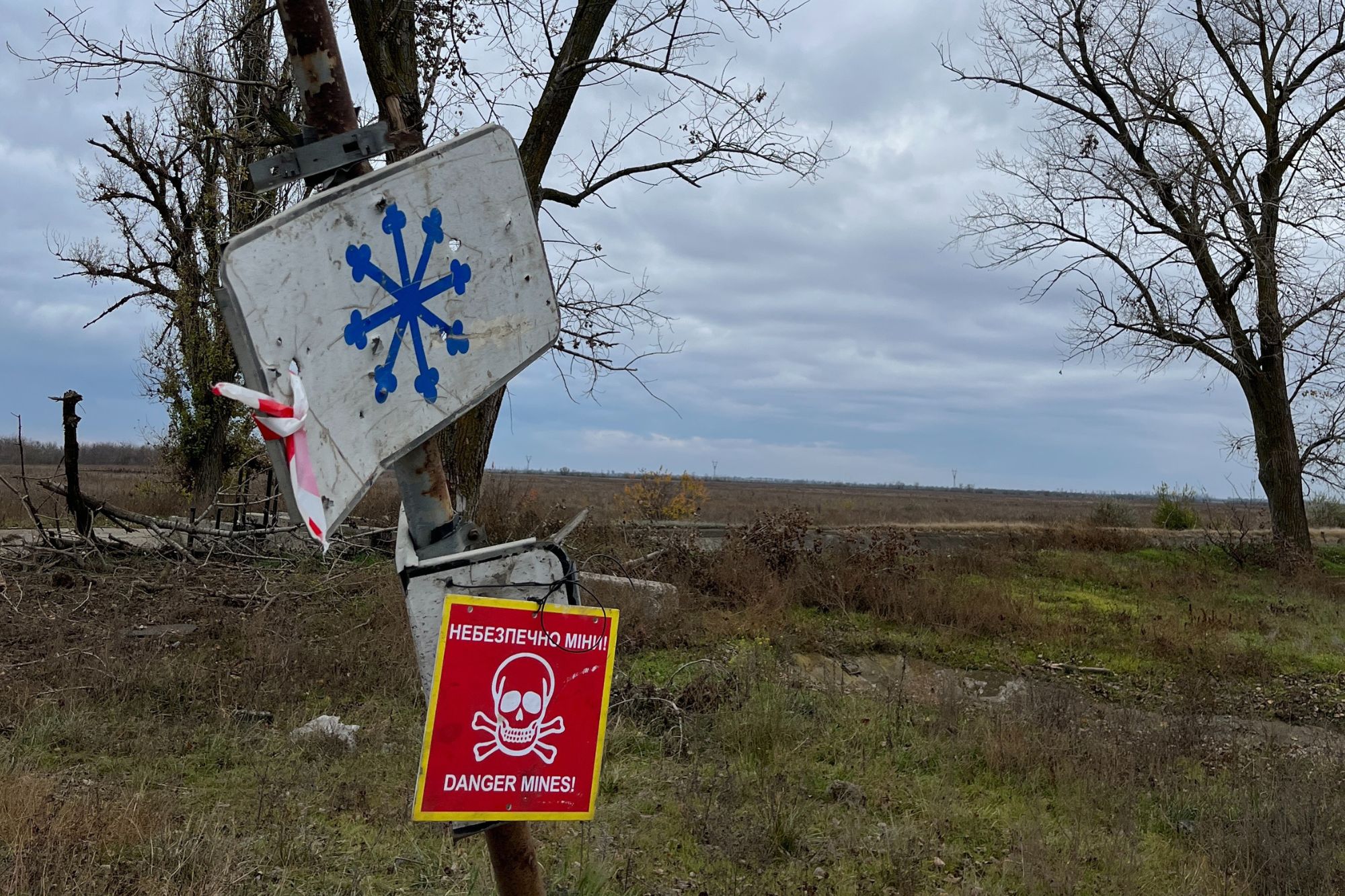 The liberation of Kherson is a significant victory for Ukraine at a particularly opportune time. It comes on the heels of a string of successes Ukrainian forces have enjoyed since early fall that includes pushing Russian troops out of virtually all of the southern Mykolaiv Oblast and a Russian rout in the north around outside of Kharkiv.

Russian forces on the east side of the Dnipro River are seemingly unable to secure a strong foothold, in part because large swaths of southeastern Ukraine are within range of the precise, long-range weaponry provided to Kyiv by Western countries.

However, Russian forces continue to pound cities across Ukraine with barrages of missile attacks. Following yesterday’s decision by the European Parliament to label Russia a state sponsor of terrorism, waves of Russian ballistic missiles rained down on cities across Ukraine, aimed not at targets of military value but instead aimed at destroying critical civilian infrastructure including gas and electrical hubs.

Though now secure, Kherson is not yet entirely safe — the city is still within range of Russian artillery. The shriek of close incoming artillery could be heard several times during WhoWhatWhy’s trip to the city’s outskirts. Though the Russian shells landed harmlessly in a nearby field, they hit the ground just 300 meters (~985 feet) from this reporter. 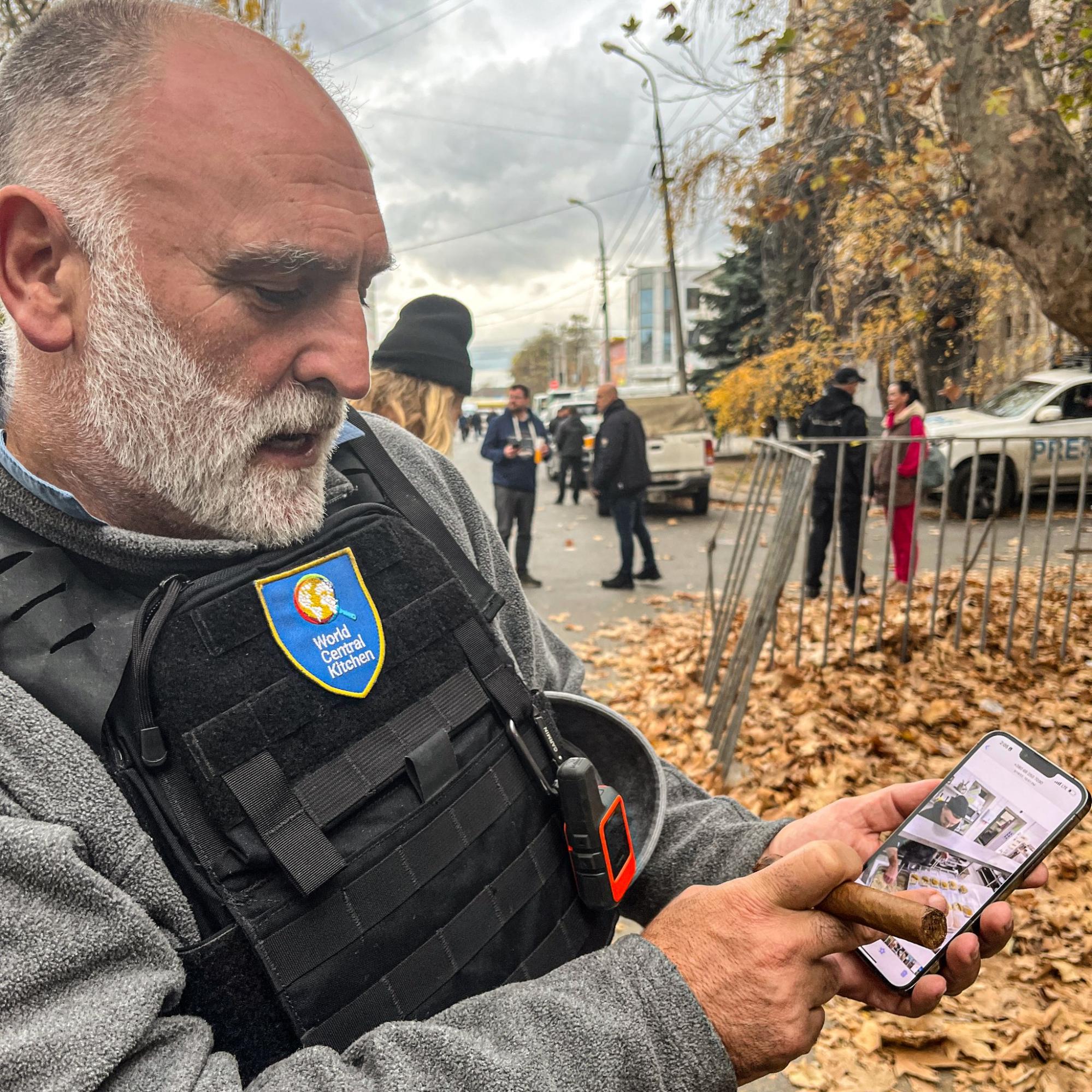 Chef José Andrés is the founder of World Central Kitchen, an NGO that provides meals and food aid to areas hit by humanitarian crises. While it is hard to assess how much food came into Kherson during the Russian occupation, at some point, Russia “did stop delivering food, leaving supermarkets nearly empty,” Andrés said.

During the occupation, Olga Federova and her family tried to buy food at open-air markets from local vendors whenever possible, both as an act of protest against the Russians and because the locally-sourced food was of higher quality. “Even my cat wouldn’t eat Russian food,” Federova said.

Kherson is a fertile agricultural region, but there was no harvest this year because the Russian invasion turned farmers’ fields into frontline battlegrounds.

“This winter will be hard,” Andrés said.