Lucy and Alex were reading on their bed, passing the time during an electricity blackout in the eastern Ukrainian city of Dnipro, when a deafening roar violently shook the room.

A Russian missile had slammed into a neighboring apartment building during the second wave of Russia’s largest missile attack on Ukraine since the start of the new year.

“It was very scary,” Lucy recalled, describing how she and her husband grabbed some of their belongings and fled.

In the immediate aftermath, black smoke billowed from rubble as a fire burned and first responders rushed to the scene. 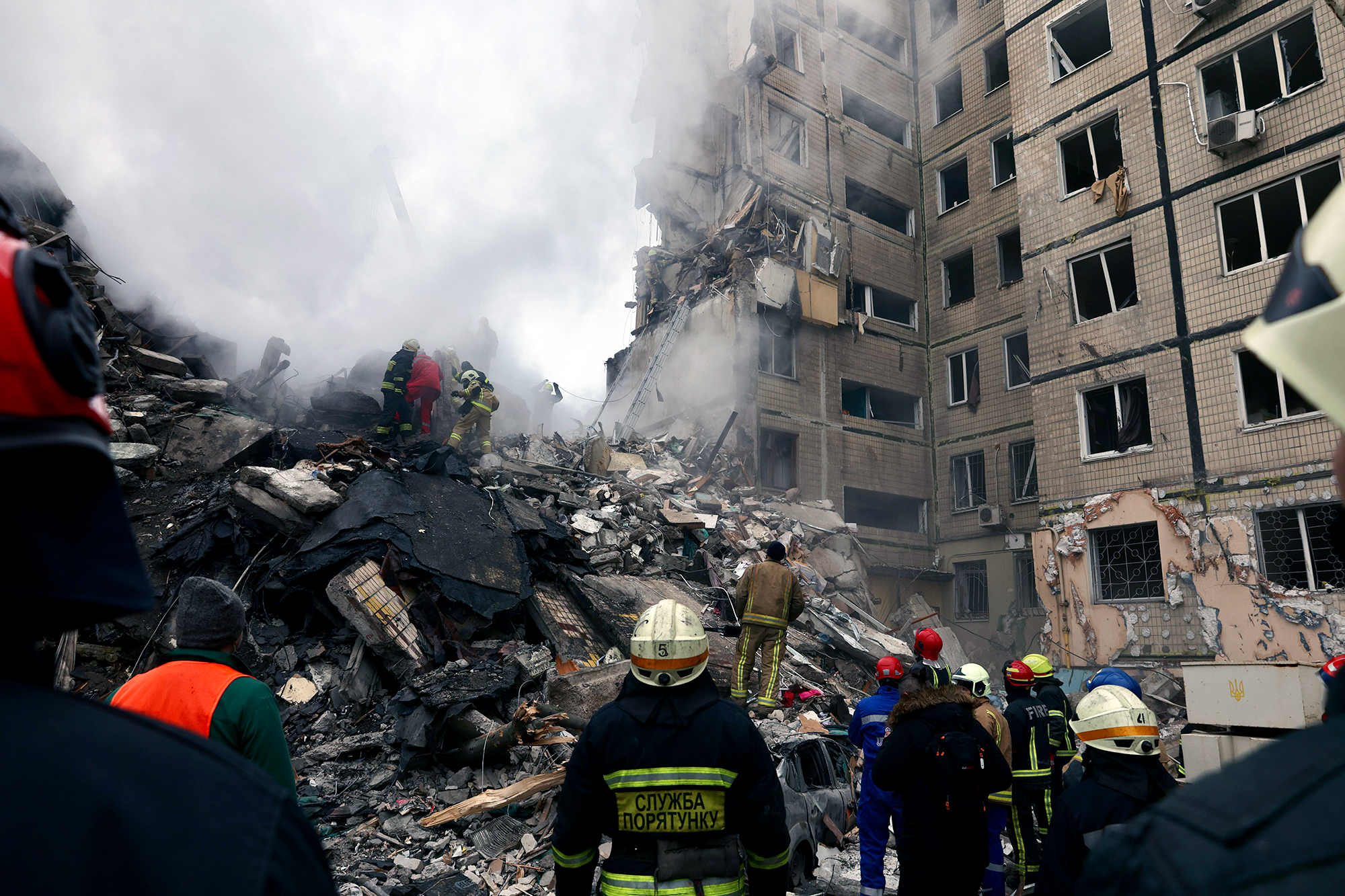 Rescue operations quickly got underway, continuing through the frigid night and all day Sunday. With smoke still rising from the caved-in wreckage, emergency workers shifted through the rubble, searching for survivors. At around noon, they spotted a young woman trapped behind debris. A team of firefighters worked quickly and meticulously, clearing away wreckage. Once they reached her and applied a neck brace, firefighters rushed the 27-year-old woman to a stretcher and then into an ambulance that took her to a hospital. The regional governor of Dnipropetrovsk, Valentyn Reznichenko, said Sunday evening that she was in intensive care with severe hypothermia. “Doctors are fighting for her life,” he wrote on Telegram. 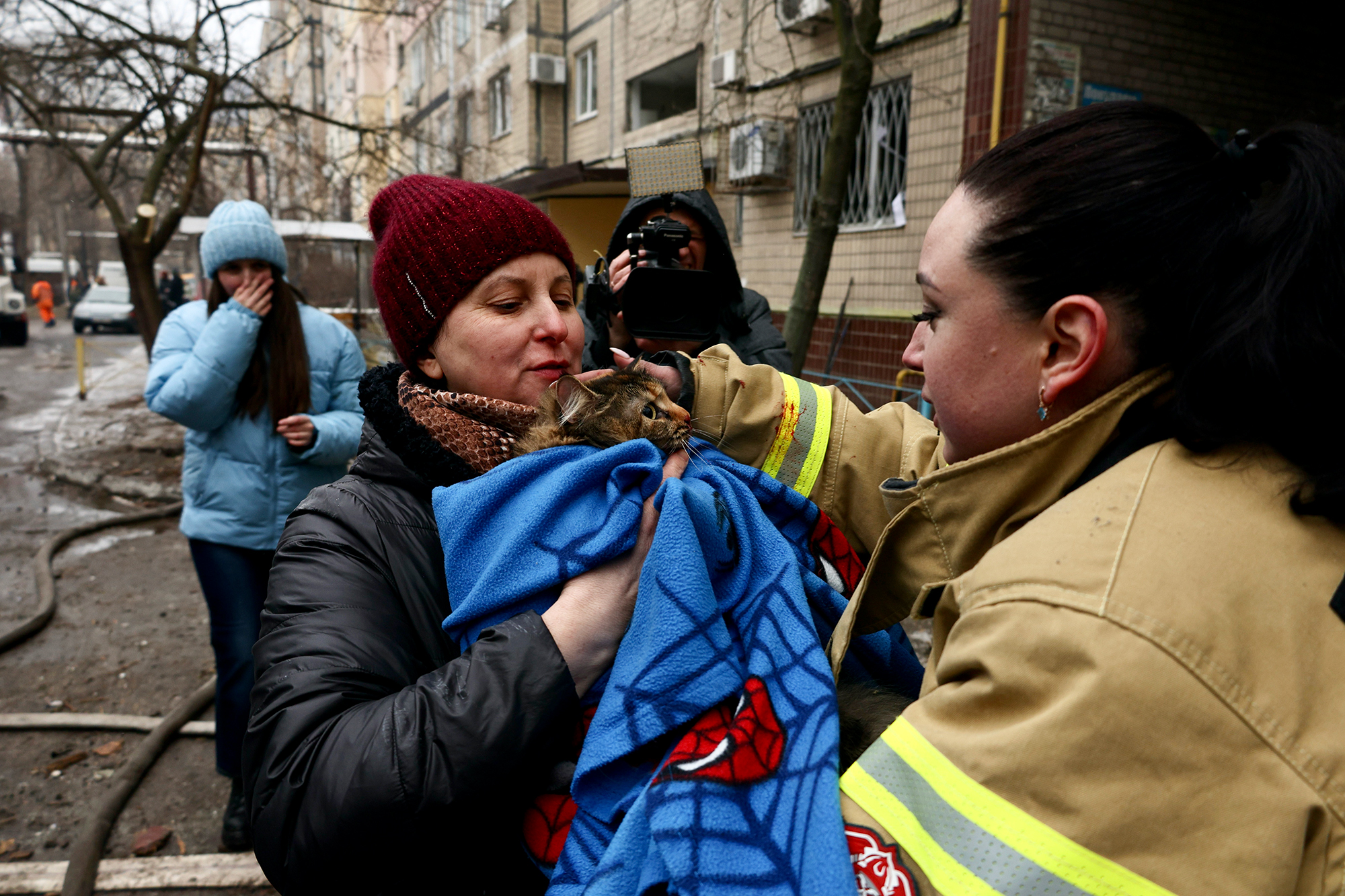 An emergency responder delivers a cat rescued from the site of a missile strike in Dnipro, Ukraine to its owner on January 15, 2023. Photo credit: Hunter Williamson / WhoWhatWhy

By Sunday evening, responders had rescued 39 people, including six children, according to Reznichenko. As darkness fell over Dnipro, Ukrainian President Volodymyr Zelenskyy said 30 people were dead. Another 73 were reported injured in an earlier statement from Reznichenko. With search and rescue operations still underway, it remained to be seen if the casualty toll would continue to rise.

Over the course of Sunday, residents stood outside the apartment complex, watching the operations and waiting for permission to enter their damaged or destroyed flats. Many collected belongings and packed bags while a few attempted to repair blown out windows with sheets of plywood. Volunteers handed out coffee, tea, sandwiches, hot soup, desserts, and an array of other foods and beverages. As they cooked outside in the freezing weather, steam rose like white clouds through the winter air, mixing with the smoke drifting from the wreckage. The air smelled pungent, like a bonfire. 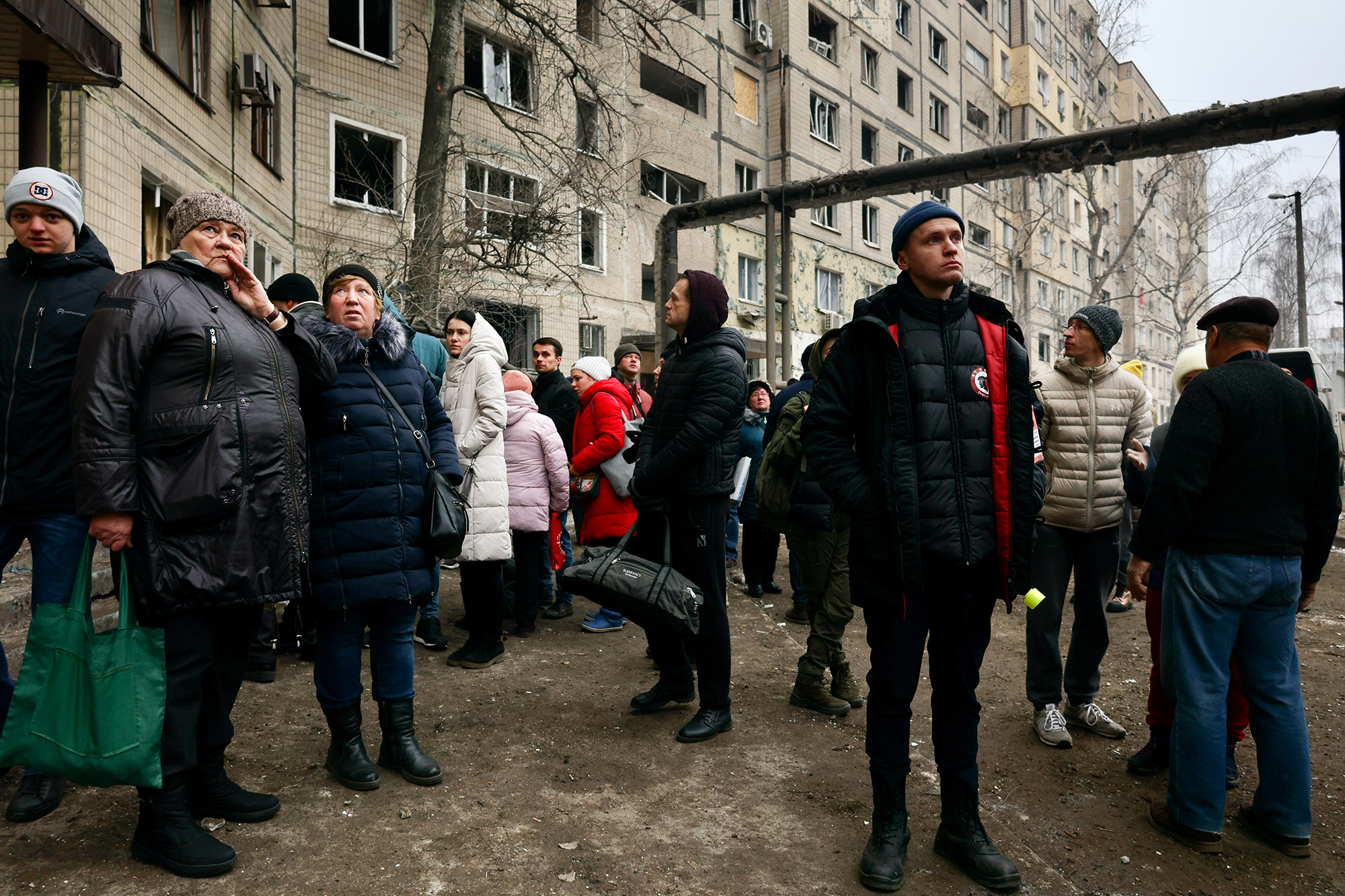 Residents observe search and rescue operations at their apartment complex while waiting to enter their apartments on January 15, 2023. Photo credit: Hunter Williamson / WhoWhatWhy

Dmitry, who asked that his last name not be used, waited in front of a nearby apartment with bags and luggage. He had been at his own apartment in another part of Dnipro, checking the news on his phone, when he learned of the location of the attack. His heart sank. It was the apartment complex where his mom, Larysa, lived. Terrified, hoping desperately that she was still alive, he hopped in a car and raced to the site.

To his relief, he found her standing outside with other residents who had been evacuated.

“I think it’s a very lucky event that she was not injured,” Dmitry said, his mother standing beside him.

While everything in her apartment was destroyed, Dmitry refused to let this bring him down. “Shit happens,” he said in a matter-of-fact, almost defiant tone.

Still shaken up, his mother Larysa declined to speak about the incident.

According to preliminary information shared on Telegram by Ukrainian President Volodymyr Zelenskyy, 72 apartments were destroyed and more than 230 were damaged. 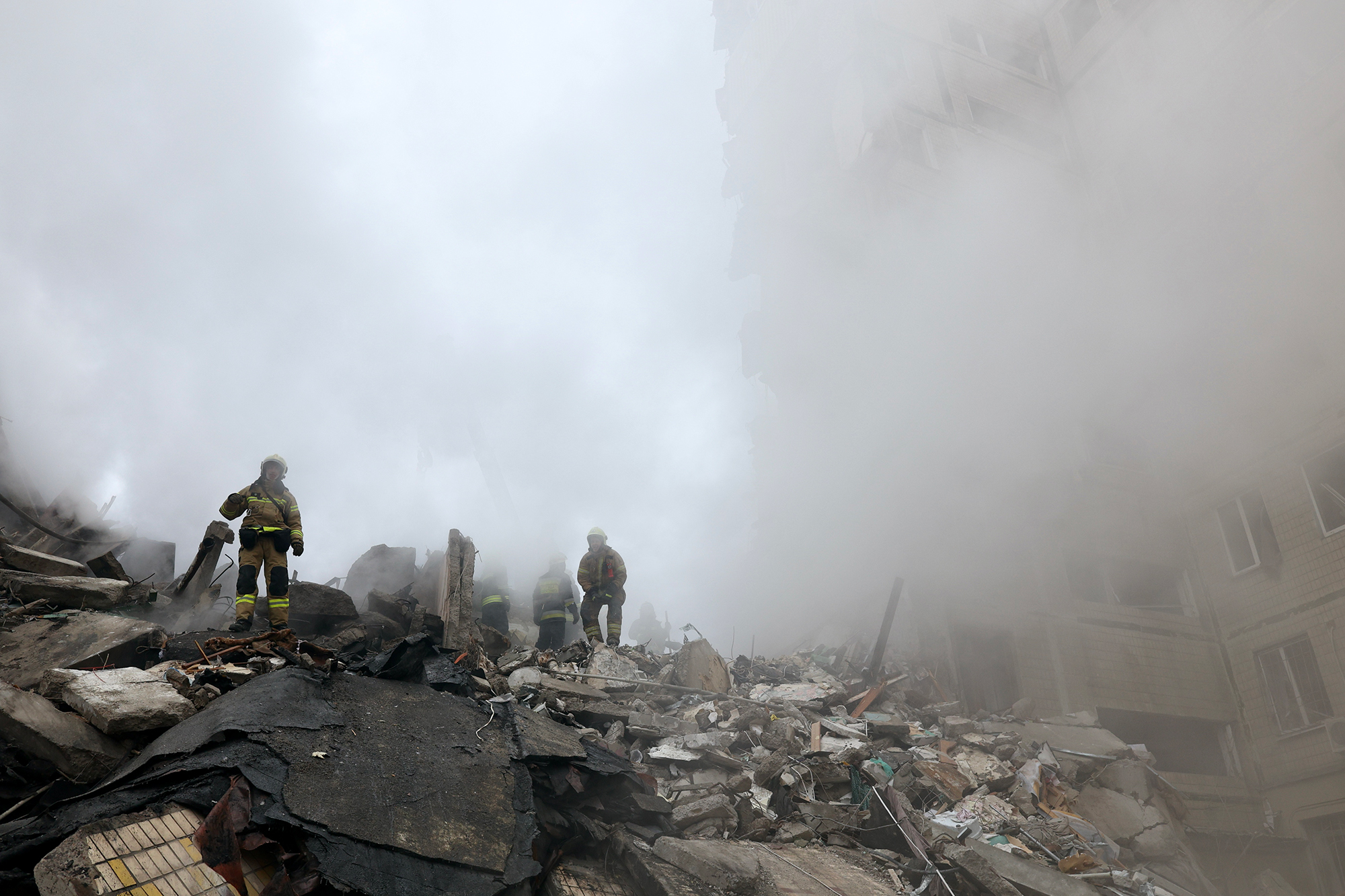 Saturday’s attack was the deadliest strike on Dnipro since Russia launched its full-scale invasion of Ukraine in February of last year. Some residents speculated that the missile was intended for a nearby thermal power plant, in line with previous attacks that have targeted critical infrastructure across Ukraine. With winter underway and temperatures regularly falling below freezing, officials and analysts say Russia is deliberately attacking such targets in a bid to break national will for fighting back against Russian forces by making daily life unbearable.

On Sunday morning, the general staff of Ukraine’s armed forces reported that Russia had carried out 57 missile strikes in the past day. It noted that 41 were cruise missiles, 26 of which were knocked down by Ukrainian air defense. Five of the cruise missiles were Kh-22s, one of which hit the apartment building in Dnipro, according to the commander of the Ukrainian Air Force, Lieutenant General Mykola Oleshchuk.

“The Armed Forces of Ukraine do not have firearms capable of shooting down this type of missile,” Oleshchuk said in a post on Telegram. He stated that Russia had fired 210 such missiles since last year. “Not one was shot down by means of anti-aircraft defense.”

Oleshchuk noted that air defense systems like the Patriot or SAMP/T are the only weaponry “capable of intercepting these air targets.”

Zelenskyy hammered that message during his nightly address on Saturday. “Can Russian terror be stopped? Yes.” He has repeatedly described advanced air defense systems like the Patriot as being the only guarantee of beating back Russia.

“Is it possible to do it somehow differently than on the battlefield in Ukraine? Unfortunately, no,” Zelenskyy said, pressing harder for military aid from Western stockpiles. “This can and must be done on our land, in our sky, in our sea. What is needed for this? The weapons that are in the warehouses of our partners and that our troops are so waiting for.”

Zelenskyy’s comments come as Ukrainian troops prepare to begin training in the US on the Patriot air defense system.

On Sunday evening, Russia’s defense ministry stated that the missile attack targeted “the military command and control system of Ukraine and related energy facilities. All assigned objects are hit. The target has been reached.”

Earlier that day, Lucy and Alex had returned to their apartment complex in Dnipro after spending the night with a friend. As they waited for permission from police to enter their apartment building, they watched the search and rescue operations underway. Lucy pointed to a glassless window on the eighth floor, where their apartment was. A destroyed home, but they were thankful to be alive.

“God saved us,” she said, breaking into tears.