Death From Above: Drones Are Changing the Landscape of War

BAKHMUT, Ukraine — On the third floor of an abandoned factory in Bakhmut, in eastern Ukraine, 39-year-old “Rem” struggles to light a cigarette while holding the remote control of his Chinese-made drone. He swears. Several feet behind him, clad in a bulletproof vest and helmet, a soldier known as “Duke” is surveying a map of the eastern approach to the city on his tablet. A dozen Russian positions have been marked with red crosses, bearing such evocative names as “mattress,” “putin,” and “machine gun.”

The ping of a notification coming from Duke’s phone finally breaks the silence. “Fire,” says Duke in Ukrainian, staring intently at the screen of his tablet. A loud bang rattles the walls and windows, followed by a whizzing sound rapidly rising above the building, getting fainter, and then stopping. A couple of seconds later, the live feed from the drone’s camera shows the shell landing right on a Russian position. “That’s perfect,” exclaims Rem, also in Ukrainian. “Exactly where we needed it.” The two men rejoice. Thanks to their store-bought DJI Matrice drone, the accurate fire from a Polish-made Krab self-propelled howitzer has silenced a Russian automatic grenade launcher.

Both from the eastern Ukrainian city of Dnipro, Rem and Duke have been serving in the Skala intelligence battalion since the beginning of Russia’s full-scale invasion of Ukraine. Created and led by Iurii Skala, a veteran of the Donbas war, this battalion is made up of mostly inexperienced volunteers like Rem, who was a car dealer prior to the invasion.

For three weeks, he and Duke have been surveying enemy movements and directing artillery fire from their position, somewhere in the center of Bakhmut. This small salt-mining town of roughly 70,000 inhabitants has been devastated by months of shelling and gruesome trench warfare that has prompted comparisons to the First World War and the battles of Verdun or Passchendaele. But even as exhausted soldiers shoot at the enemy from mud-filled trenches and men perish by the dozens every day from unending artillery fire, the ever-growing use of drones has revolutionized the nature of the fighting in Bakhmut — and in Ukraine at large.

In the basement of a residential building located a few blocks from their position, a portly officer is bent over a table, listening intently to a walkie-talkie. Facing him is a flat screen television that transmits live footage from a drone circling above the city. The air is thick with anticipation. When word of a successful strike finally comes through, the officer triumphantly throws his fist in the air before slumping back in his chair. “Now we can move easily,” he says, grinning. Guided by one of the Skala battalion’s drones, artillery fire has silenced a Russian position. 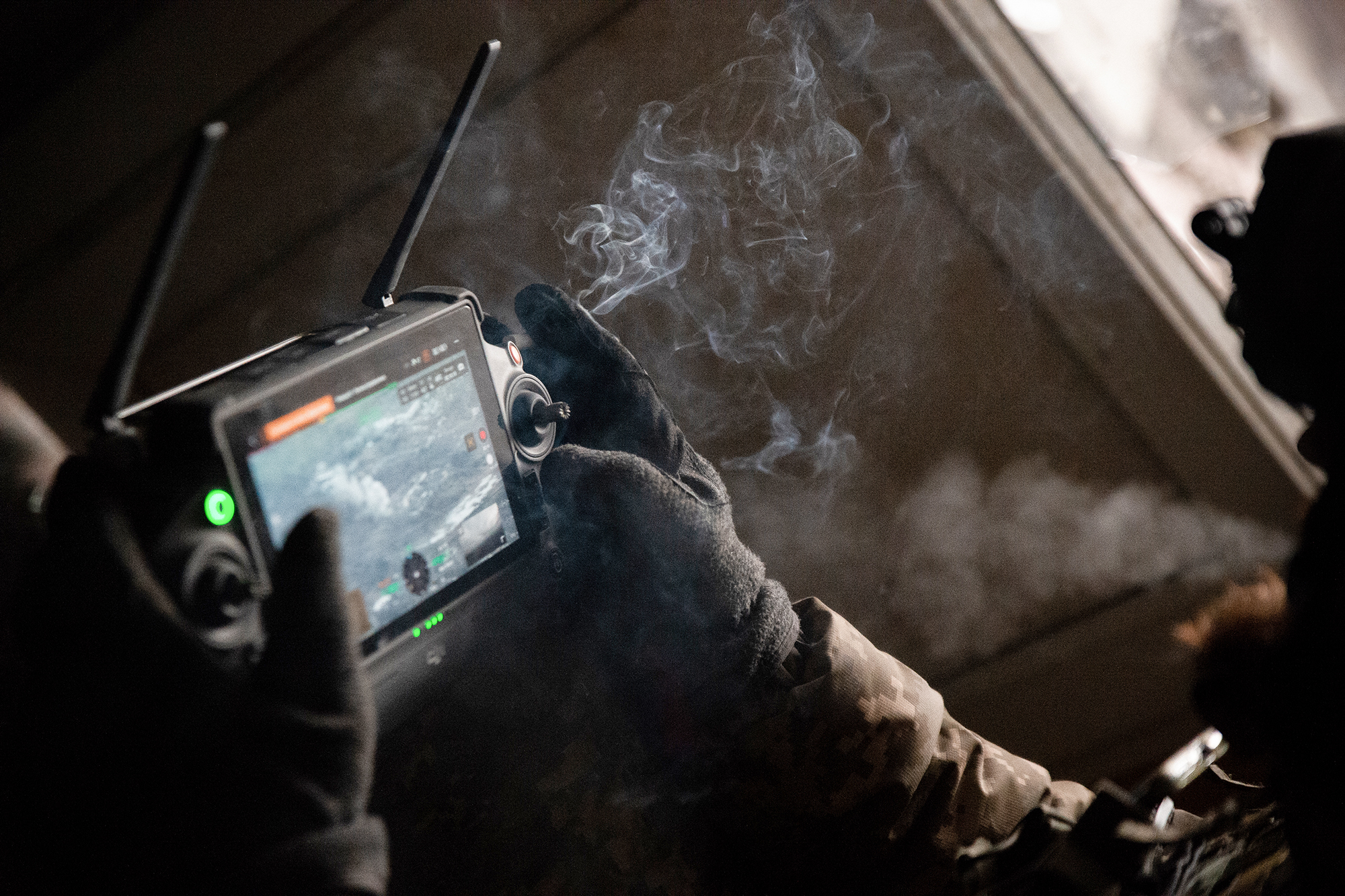 Rem surveys the aftermath of a Ukrainian strike on a Russian position with a drone. Photo credit: Madeleine Kelly / WhoWhatWhy

Unmanned aerial vehicles (UAVs) have become a ubiquitous part of the Russia-Ukraine war, with both armies increasingly relying on them to conduct aerial reconnaissance missions, direct artillery fire on the targets they have identified, or even to strike enemy troops and vehicles — to devastating effect. Outfitted with an explosive payload or equipped with missiles, UAVs have indeed proved to be a formidable — and relatively inexpensive — way to strike enemy targets, sometimes far behind the front line.

The most publicized of Ukraine’s drone arsenal is undoubtedly the Turkish-made Bayraktar TB2 (despite its growing irrelevance following the establishment of stronger air defense in Russian-occupied territory) but the country’s armed forces have also been using US-supplied Switchblade and Phoenix Ghost UAVs. The latter two are considered “loitering munitions,” autonomous missiles able to stay airborne until they identify a suitable target.

Ukraine has also developed a homemade drone called the R18, able to destroy Russian targets by dropping ammunition. With its range of up to 4 kilometers (~2.5 miles) and its thermal-imaging camera — allowing it to operate at night — it has become very popular among soldiers. In a May 2022 article from NBC News, Valerii Iakovenko, founder of a Ukrainian tech firm that advises the government on drone use, put the number of UAVs in use with the Ukrainian military at 6,000, most of them relatively inexpensive, Chinese-made such as the ones used by Skala’s operators, Duke and Rem.

Neither of the two men had ever flown a drone prior to the outbreak of the war. “Our officers asked us in September who wanted to work with drones, and I volunteered,” says Duke, taking a drag on his cigarette. The 39-year-old underwent two weeks of training in central Ukraine, where he learned how to fly drones, identify enemy positions, and coordinate with artillery. Most of the training, however, is actually done on the job, Duke says. “You learn something new every day here.”

The ubiquitous use of UAVs during the war has even made its way into Ukrainian popular culture, prompting the creation of memes, songs, and compilation videos. A song extolling the virtues of the TB2 became incredibly popular in the early weeks of the war, gracing the Spotify playlists of thousands of soldiers and civilians alike, while videos of drones dropping ammunition on Russian soldiers and vehicles are being widely shared on Twitter or Reddit. 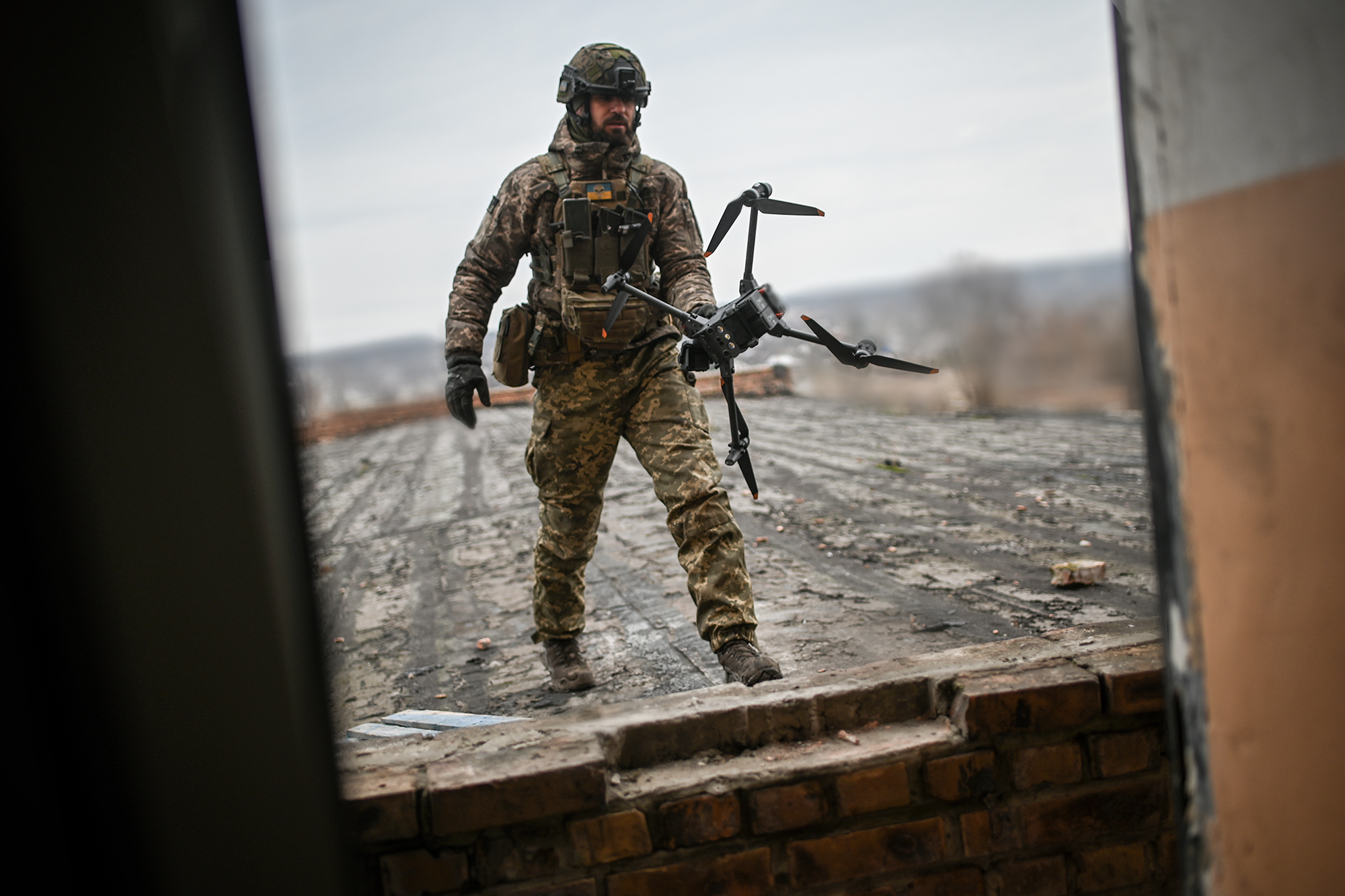 Rem brings the drone back inside to change its batteries. Photo credit: Justin Yau / WhoWhatWhy

But while, according to experts, Russia has been lagging behind in the production of UAVs — its deficiencies compounded by the sanctions targeting the country’s military-industrial complex — in recent weeks it has acquired an undisclosed number of Iranian-built Shahed 136 drones. The dreaded “mopeds” (as they have been nicknamed by the Ukrainians for the distinct sound of their two-stroke engine) have been used by Russia to target key energy infrastructure across the country, in a bid to deprive Ukraine of power and heat as winter sets in. While their technology is rudimentary — they are not remote controlled, and the coordinates of the target have to be manually entered into the drone — they have proved a cheap alternative to the more expensive cruise missiles. Not a week passes without them slamming into electrical substations, power plants — or busy intersections, as they did on October 10 in Kyiv.

The Ukrainian government says that Russia has ordered at least 2,400 of these loitering munitions from Iran, and called on its Western partners to supply more and better anti-air defense systems, such as the American-made NASAMS. Meanwhile, in a recent interview with The Associated Press, Ukraine’s minister of digital transformation, Mykhailo Fedorov, declared that the country was planning to develop new drone models able to destroy loitering munitions before they can reach their target. Fedorov also stated that Ukraine had acquired 1,400 drones, to be used mostly for reconnaissance purposes.

Ukrainian civilians have launched multiple crowdfunding appeals to finance the acquisition of drones. One of those appeals, launched after the October 10 attacks across the country, raised $9.6 million in 24 hours for the purchase of 50 Ram II UAVs for the armed forces. Meanwhile, in late October, Star Wars actor Mark Hamill revealed to Bloomberg that he had donated funds to acquire and send 500 drones to Ukraine, reasoning, “Ukraine needs drones. They define war outcomes, they protect their land, their people, they monitor the border, they’re eyes in the sky.”

Yet Ukrainian soldiers say that they need more, as many of their UAVs have been shot down or broken. According to a November report by the Royal United Services Institute (RUSI), a London-based think tank, around 90 percent of all drones used by the Ukrainian armed forces between February and July were destroyed. The average life expectancy of a fixed-wing UAV is approximately six flights, that of a store-bought drone only three.

“Our support artillery is working really well, and for that we have to thank our partners for their support,” confirms 23-year-old Aleksander, a member of the Skala battalion serving in Bakhmut. “However, we don’t have enough drones. That’s the only thing we’re missing.”