Christmas as Worship and Weapon in Ukraine

Two weeks after returning from positions near Bakhmut, the site of the most brutal fighting in Russia’s war against Ukraine, the 18-year-old private first class and his friend Dmytro still find it difficult adjusting to civilian life.

“For me, it’s tough to be in society with civilians and to socialize with them,” said 20-year-old Dmytro, who is also a private first class in the Ukrainian military.

Despite that, both men joined their friends for Christmas celebrations on December 25, a date growing in popularity in the largely Orthodox Christian nation. 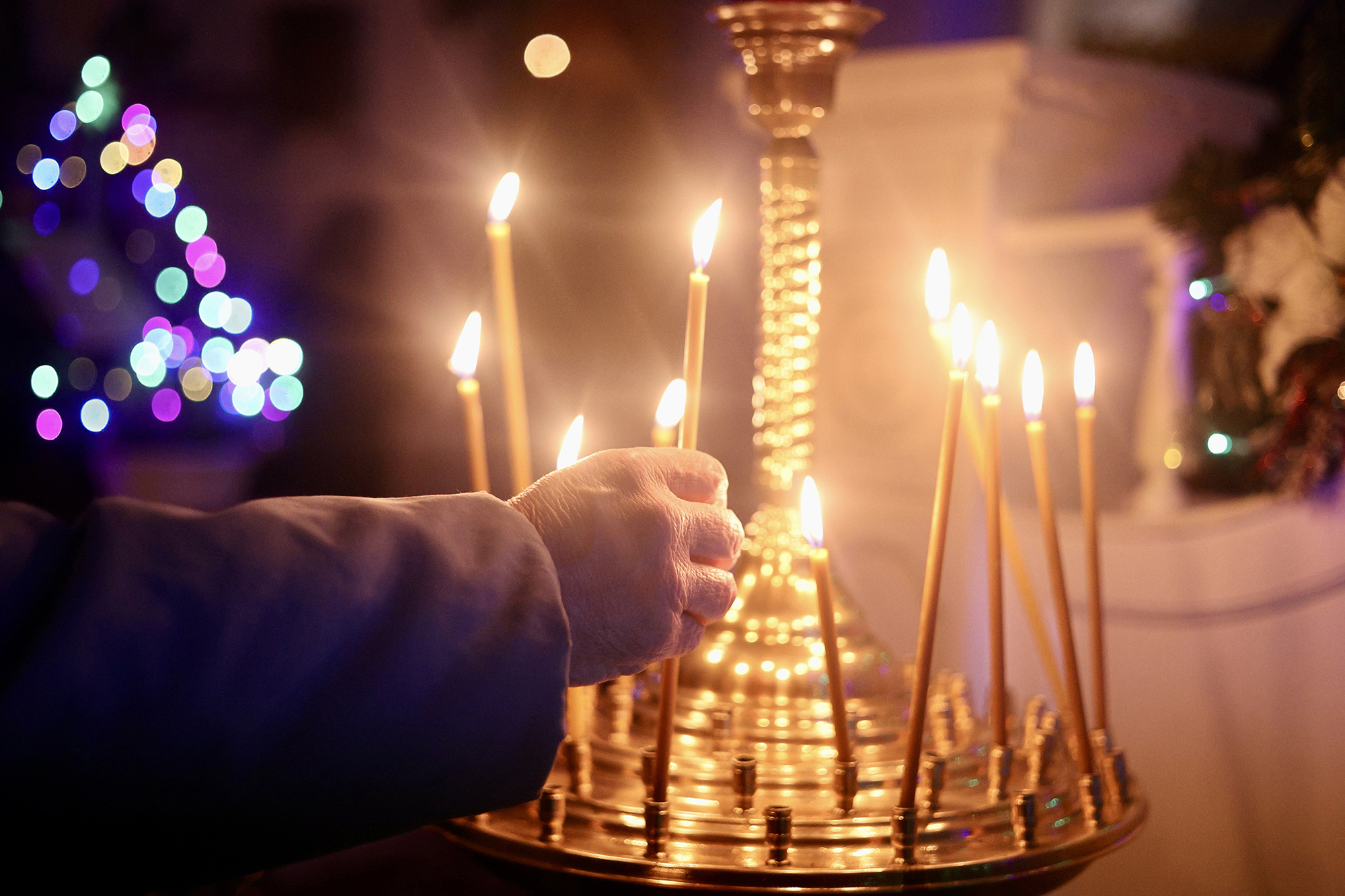 “It’s an old tradition that we need to change,” said Denis.

Despite its increasing popularity, the push to celebrate Christmas on December 25 remains deeply controversial, with critics seeing the move as politicizing a religious matter. 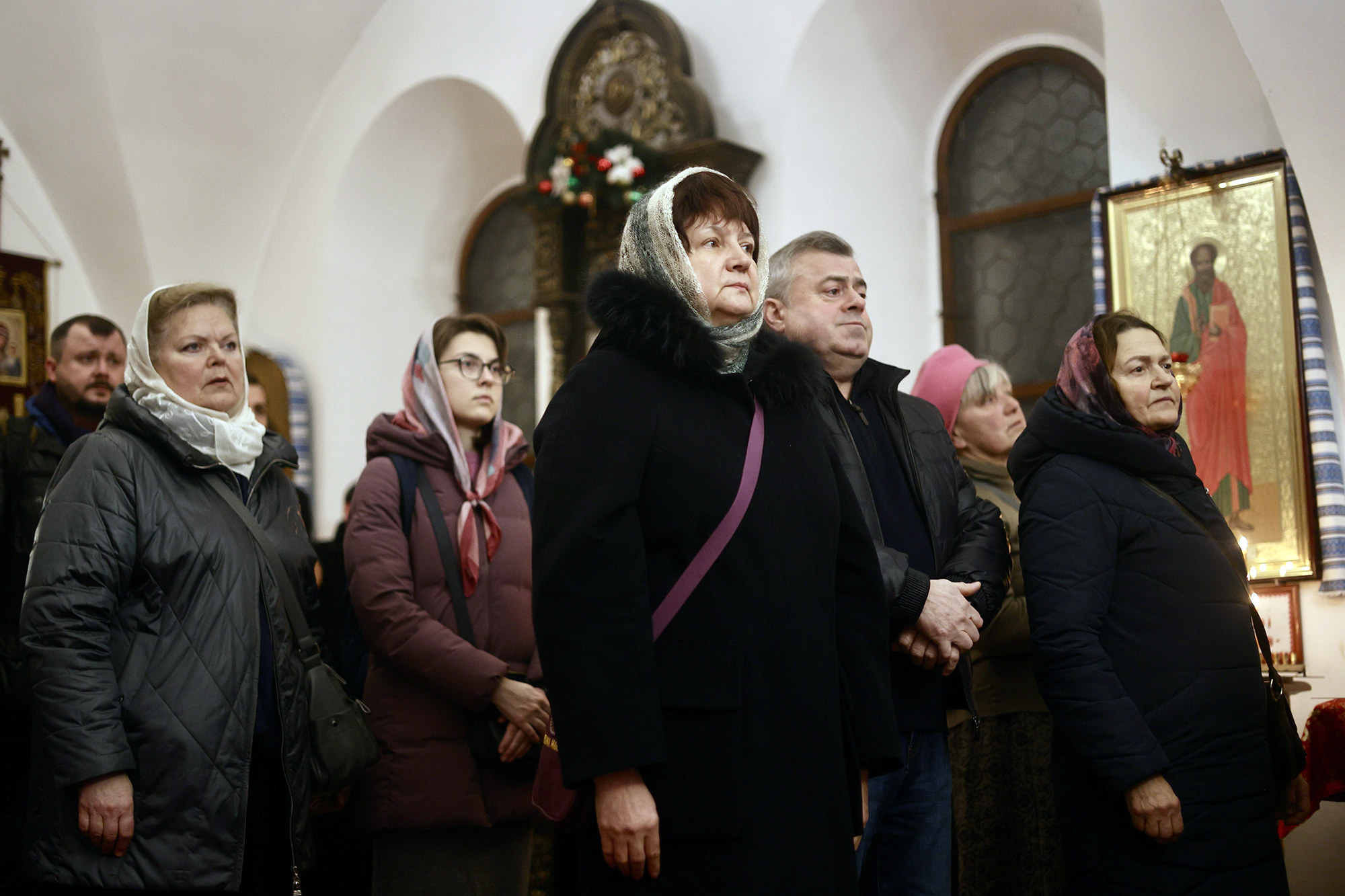 Still, Denis, an Orthodox Christian, said he and all of his friends in the military support changing the date, viewing it as a necessary move to further separate the former Soviet Union member-state from Russia.

“They are terrorists,” he said about Russians. “They are killing my friends and guys in my unit.” 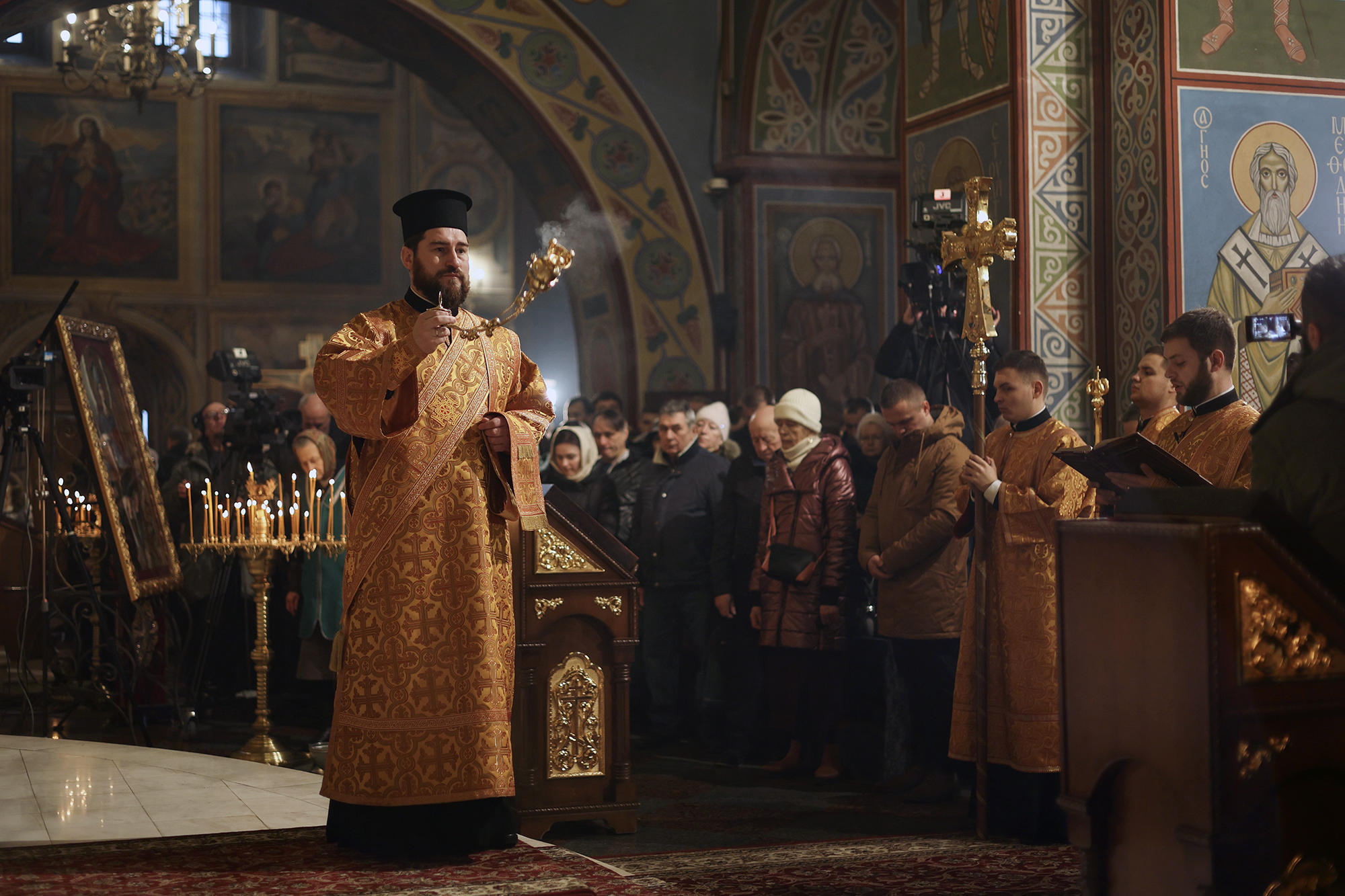 An Orthodox Church Clergy Member performs censing, a religious act in which the smoke of burning incense represents the rising of prayers and grace of the Holy Spirit, during liturgy in St. Michael’s Golden-Domed Monastery in Kyiv, Ukraine, on Christmas Day, December 25, 2022. Photo credit: Hunter Williamson / WhoWhatWhy

After Russia invaded Ukraine on February 24, both Denis and Dmytro, whose youthful appearances reflect their young ages, took academic leave from university and joined Ukraine’s Territorial Defense Forces, a branch of the country’s military composed of volunteers.

Dmytro, who had been studying data science, joined first. Denis, a law student who initially fled to Western Ukraine with his family, joined a few months later. Both men spent much of the year on or near the frontline.

As we spoke in front of St. Michael’s Golden-Domed Monastery under a light snowfall, their friend Roman walked up.

Behind him, members of the Plast National Scout Organization of Ukraine, the country’s largest scout organization, sold desserts and crafts from tables as part of a fundraiser. Some of the money raised will go toward the military, said Denis. He and Dmytro both joined the scouts in early 2014, after deadly clashes between protesters and security forces in Kyiv’s Maidan Square that came to be known as the Revolution of Dignity.

Both men credit Plast with teaching them skills invaluable in combat.

“It helped us on the frontline,” Denis said. “For example, I know how to dig a hole in the ground and hide from artillery and shelling.”

Dmytro said those skills were especially crucial at the start of the war, when the chaos and turmoil meant there was no time for formal military training.

“My scout unit taught me practical skills and stress management that benefited me,” he said. 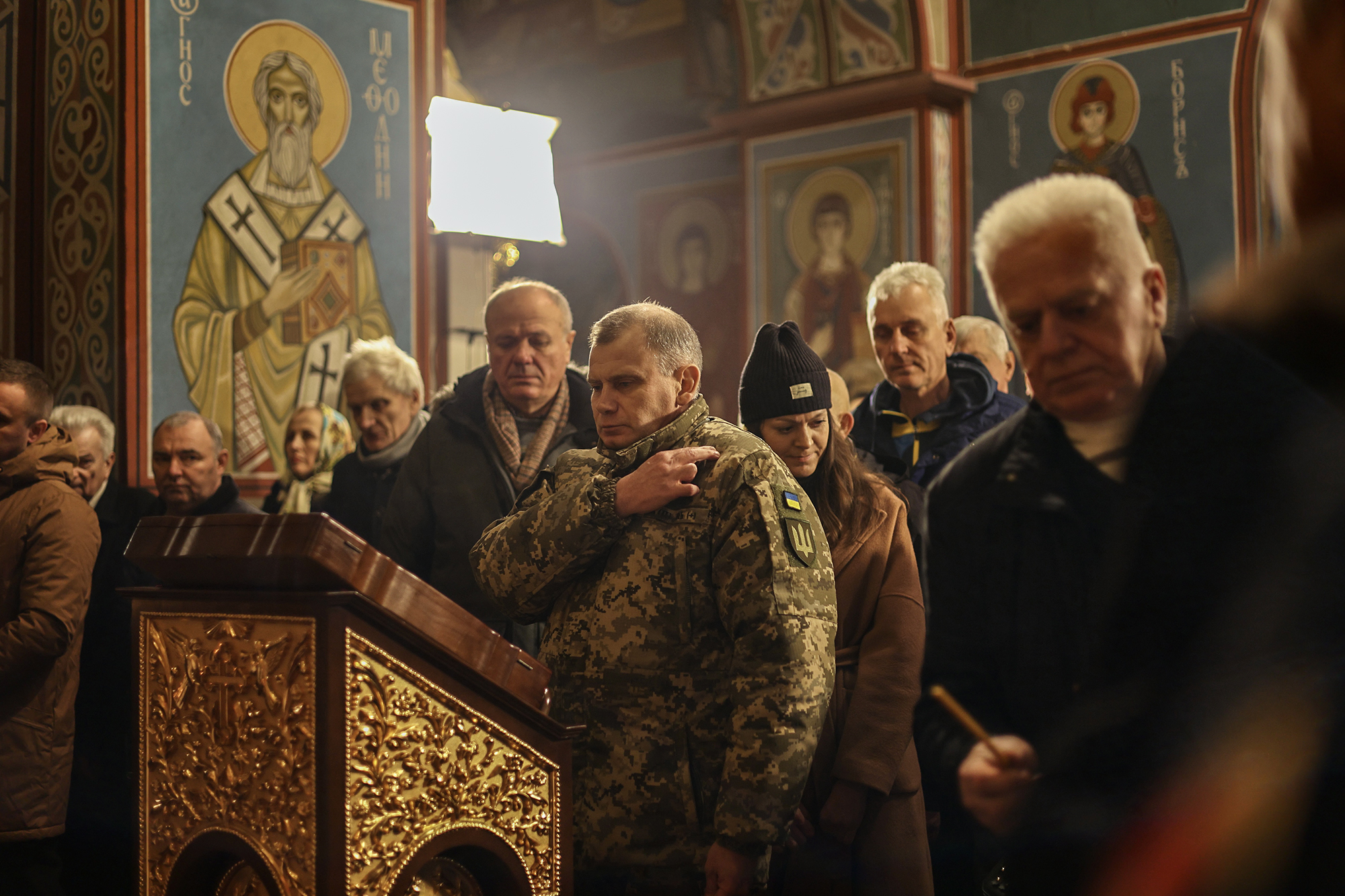 After the completion of morning prayers, Plast hosted a play inside the monastery. Illuminated by candlelight, young scouts dressed in costumes sang carols and performed a skit about a man seeking a woman’s hand in marriage. The woman tells the man she will only marry him if he finds a generator that can be used to provide electricity — a task he ultimately succeeds in accomplishing.

“It’s a parody of our current situation,” Roman said as the play unfolded. 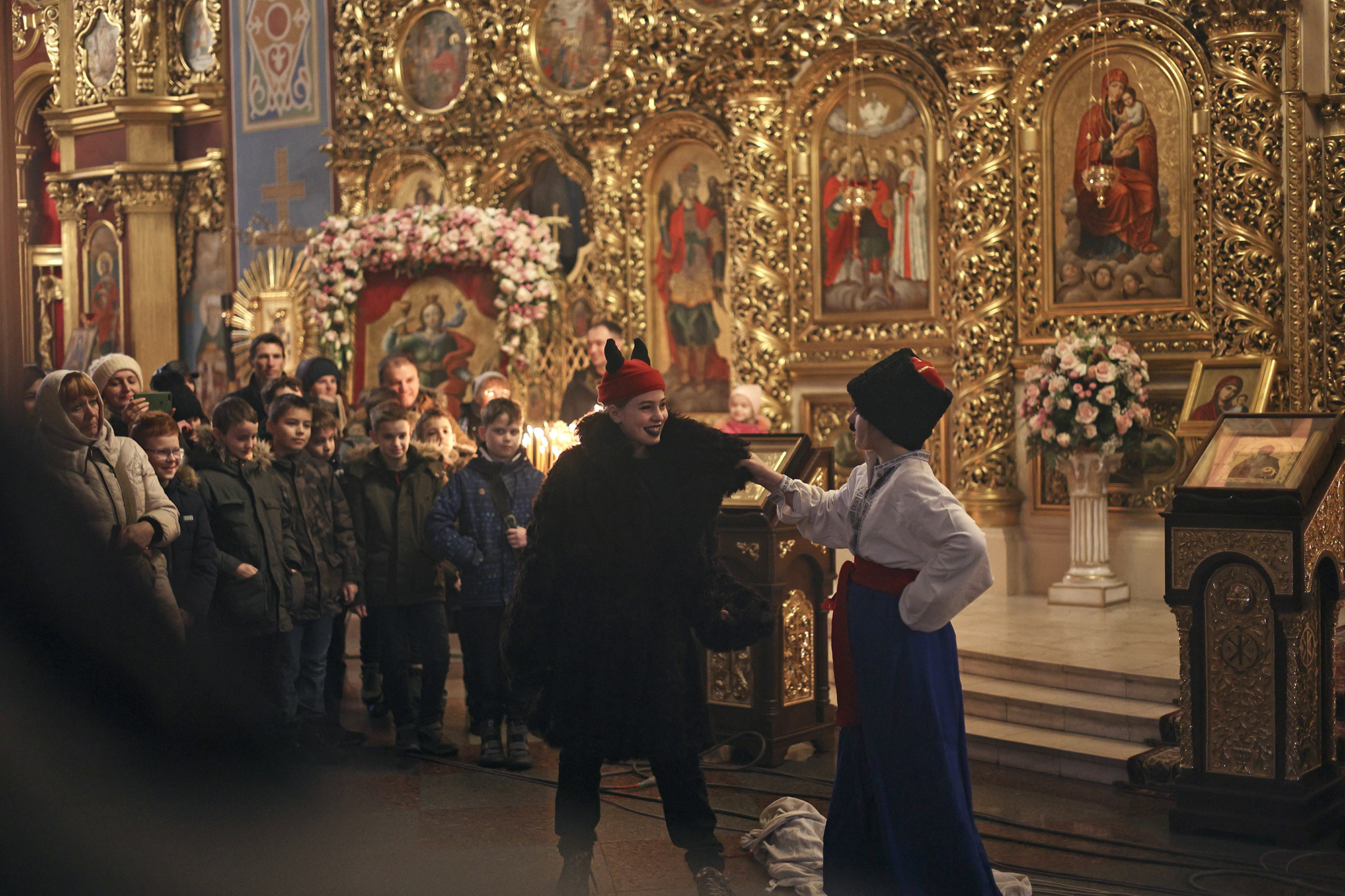 In recent months, Russia has targeted critical Ukrainian infrastructure with rockets and drones, leaving many Ukrainians without electricity and water for long stretches of time — sometimes for days. As a result, many citizens and businesses have acquired generators to provide electricity during blackouts.

Despite months in combat, Denis admitted that he has found it hard adjusting to the lack of electricity in Kyiv. With winter underway, temperatures in the capital regularly dip below freezing, especially at night.

Inside the monastery, candlelight illuminated the play and an awards and promotions ceremony that followed.

Afterwards, Denis, Dmytro, and some other scouts headed to the Church of St. Nicholas in Askold’s Grave Park, where a memorial stands for Mark Paslawsky, a former Plast scout and US Army Ranger who became the first foreign casualty of the war in 2014. Gathered in front of the memorial, Denis briefly explained details about Paslawsky to a few teenage scouts.

After he finished speaking, Roman lit a candle at the foot of Paslawsky’s monument. The candlelight flickered, church bells rang, and the group of scouts said a prayer. The entire ceremony lasted only a few minutes. When it was finished, the scouts posed for a photo. 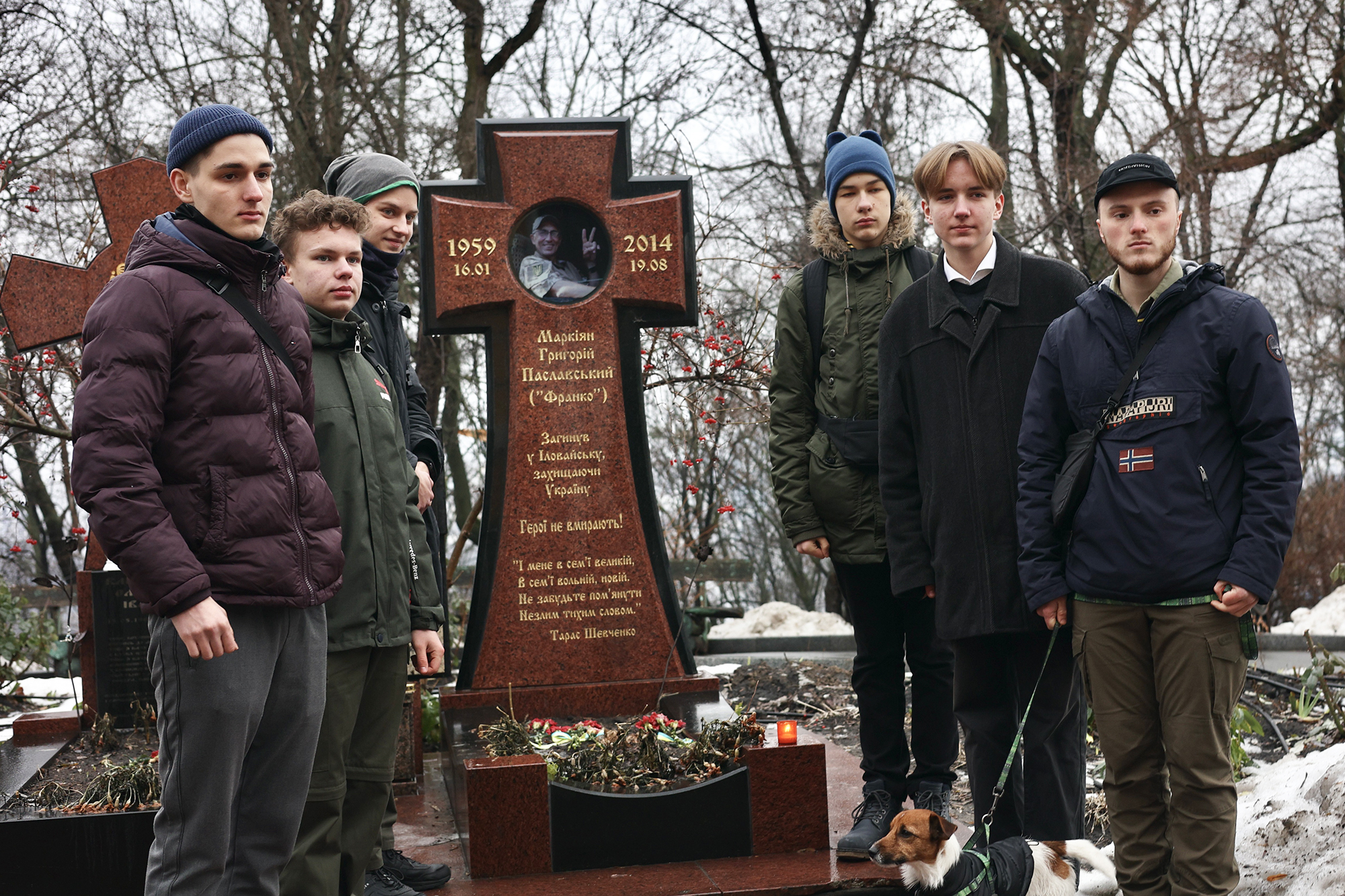 As the sun began to set behind the overcast sky, the friends shook hands and parted ways.

Denis, Roman, and I made our way to a nearby station. As we walked, Denis talked about additional military training set to begin Monday that is meant to prepare him and his unit for their next operation. Sometime soon, though he’s not exactly sure when, he will return to the frontline.

Shortly before we reached the station, air raid sirens blared across Kyiv. Denis and Roman continued to walk casually.

“Everyone in Kyiv is used to it,” Roman said about the sirens. “No one really reacts to it anymore.”