KYIV, Ukraine — Daria Tsykunova can’t be sure where her partner is — or if he’s still alive.

The 22-year-old last heard from Illia Samoylenko the day after he and about 2,400 other Ukrainian fighters — holed up for a month in the tunnels and bunkers of the labyrinthine Azovstal steel factory fighting in a last stand for the besieged city of Mariupol — finally surrendered to the Russians on May 16.

Around 100 of the most grievously wounded Azovstal defenders were exchanged in a prisoner swap in late June. Most of the rest — of whom about 1,000 are, like Samoylenko, members of the controversial Azov regiment — were at the Russian-controlled prisoner-of-war (POW) camp at Olenivka. There, at least 50 prisoners were killed and 75 wounded on July 29, when an explosion and fire ripped through the prisoner barracks.

Both Ukraine and Russia have blamed each other for the attack — Russia claiming it was a rocket from a US-supplied HIMARs; Ukraine and foreign intelligence surmising it was the Russians deliberately destroying the prison to hide evidence of torture and other forbidden abuses.

It’s still unknown exactly who died or was injured during the attack. Unconfirmed lists of alleged victims were circulated on the internet. No official tally has been released. Tsykunova and other relatives and friends of the Azovstal garrison’s survivors are left nervously waiting for news, any news — and hoping.

“I still believe that we will be reunited some day,” she said, her voice slightly cracking with emotion despite having answered this question before.

“I don’t know if he still thinks about me, but even if we won’t be a couple after this, we will still be great friends,” she added. “I believe he should live, and should be returned home from Russian captivity. Because people like him should change the world.” 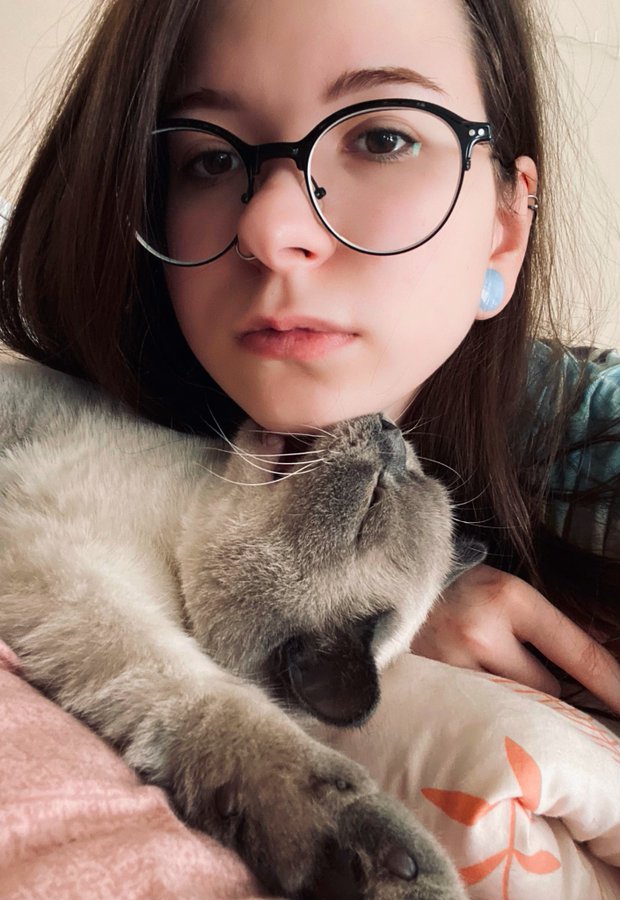 I first met Illia Samoylenko in 2019, in the Donbas. He was well-spoken and highly intelligent, and he bore the physical markers that indicate an experienced combat veteran: He had lost his left arm and one eye in a Russian shelling attack, but returned to service in Azov’s intelligence operation — with a new glass eye — motivated, he told me, by a deep passion for his work and a love of soldiering.

He left the military in 2021 but volunteered to return in the days leading up to the February 24 invasion. He lectured new recruits and worked in training. When Russian bombs started falling on Mariupol, he chose to stay, and was a key figure representing Azov during its stand at the Azovstal factory complex.

Azov is deeply controversial. The unit carries a certain bit of infamy owing to its undeniable origins with far-right extremist groups. Its founder and first leader is a notorious far-right Ukrainian nationalist, whose choice to adopt iconography associated with neo-Nazis fuels the Russian narrative that Azov is representative of a broader Ukrainian far-right movement, and that the motive for the invasion was the legitimate “de-Nazification” of Ukraine. All this also plays a role in the Russian assertion that some of the Azov fighters captured in May are war criminals.

But I embedded with the unit in 2019 and can attest that following its official merger into Ukraine’s National Guard, the unit underwent comprehensive reform. Far from a political outfit, Azov is now home to some of the country’s most highly trained and experienced soldiers, many of whom are from diverse cultural, religious, and social backgrounds. Radicals in the unit left, and the remainder are mostly “centrists,” Kateryna Prokopenko told me.

Prokopenko was on the phone with her husband Denys — Azov’s commanding officer, named a hero of Ukraine for the defense of Azovstal — for less than a minute after the steel mill’s surrender and evacuation. It’s still the last word she’s heard.

Kateryna suspects that Denys, and other high-ranking command staff like Illia, are likely being held in Russia, and not in occupied Ukrainian territories. Normally, that might be cause for hope, as it would be an indication that neither Denys nor Illia were harmed in the POW camp bombing. But Russia declared Azov a terrorist organization a few days after an official Russian embassy account posted a tweet calling for Azov fighters to die a “humiliating death.”

One requirement of the brokered surrender agreement was that the Red Cross would have access to facilities to monitor and oversee the treatment of POWs. Instead, the Red Cross has  been denied access to the captives and unable to visit the Olenivka facility.

A gifted artist and illustrator with flowing blonde hair and piercing eyes, Kateryna had aspirations of working for Disney, “until February, when everything changed,” she said.

She initially wanted to join the Territorial Defence unit in Kyiv, but Denys told her to go to the safety of bomb shelters. In the earliest days of the invasion, she captured a collaborator who was spying on a nearby Ukrainian military facility. 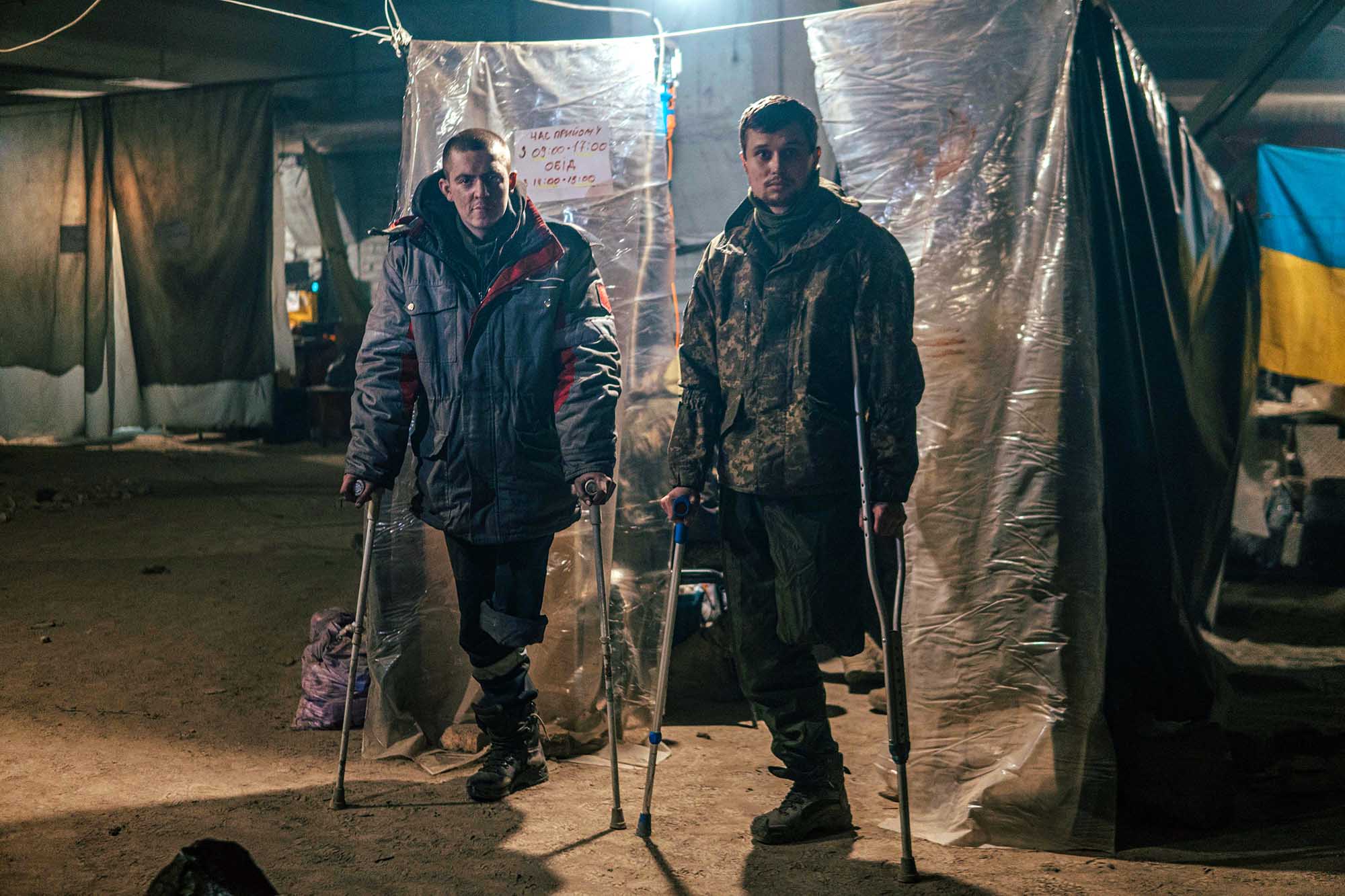 Since the May capitulation, she has run an association advocating for family members of captured Azovstal defenders. She and more than 20 other volunteers represent over 300 families, many of which have children waiting for fathers to come home. They regularly take part in protests and other efforts to keep the plight of the POWs in Ukrainian — and international — minds.

“I’m the main person who is constantly in conversation with the Ukrainian government,” she said. “I lead our brainstorming sessions to come up with ideas on raising awareness about our defenders.”

Kateryna has regularly written to the office of President Volodymyr Zelenskyy and his wife, but neither of them have made time to meet. In the case of the president, the requests have gone unanswered; in the case of Olena Zelenska, promised meetings have been continuously postponed. “We only want five minutes,” Kateryna tells me, disappointment and frustration clearly audible in her voice.

Kateryna and hundreds of other family members continue to apply pressure to government officials through public and private channels. But she still feels that it’s not enough. “I want the world not to be indifferent,” she tells me, somewhat dejectedly. “It feels like only we’re here. That the whole world is watching us die. It’s genocide.”

Her efforts to bring attention to the plight of the prisoners took her to the Vatican, where she met with Pope Francis. “We asked him, ‘Please don’t let them die.’” The meeting was revitalizing for the morale of the Azov members’ families — “a breath of fresh air,” as Kateryna put it. According to her, the Pope said he was willing to travel to an area at the front line to negotiate the release of the Azovstal defenders, but ultimately the talks led nowhere.

As Ukrainian and international authorities continue to investigate Russian atrocities in areas like Bucha and Irpin, on the outskirts of Kyiv, there is a growing sense that this is just the modus operandi of the Russian military in their invasion of Ukraine.

Today is the birthday of my dearest 💙
I know that the enemy is guileful, I know that Red Cross is indifferent. But I know the main thing — Ukraine is waiting for you. I am waiting for you.
You sacrificed 9 years to save Ukraine.
Now it’s time to save you.
🎨 Feday Lida pic.twitter.com/NPJFh51l6H

I asked Daria about the motivations behind the apparent war crime in Olenivka and execution of the POWs in Russian care. “I believe that Russia feels that they have so much power, that they can do anything they want, and they decided to show it again,” she said. “They decided to kill Mariupol defenders in Olenivka because they wanted to show us that our expectations can be ruined at any time.”

“They want us to lose our hope — they want to demoralize us, and demoralize the other prisoners of war in occupied territories.”

“It’s to make them feel unsafe,” she continued. “And of course they didn’t feel safe before the attack, but the deaths of prisoners in captivity is really demoralizing. I believe that the people in captivity think, ‘This will end at some point, and I will return back to Ukraine,’ and that gives them strength to continue going on, to stay sane.”

“But when you see that 200 people were locked inside of the prison in Olenivka,” she added, “and the barracks explodes from the inside, and those around you burn to death, you won’t have such hopes that you will be returned to Ukraine.”