A member of Regimental Combat Team 8 signals to team members in a poppy field during a security patrol from their patrol base in Helmand province’s Green Zone, west of the Nahr-e-Saraj canal on April 5, 20011. Photo credit: DVIDSHUB / Flickr (CC BY 2.0)
International

Will Afghanistan Emerge as a Narco Superstate?

Will post-US Afghanistan turn into the world’s first super terrorist narco-state? It’s a possibility that both President Joe Biden and Pentagon planners need to think about.

Estimates are that Afghanistan currently produces 80-90 percent of the world’s illicit opium that is eventually refined into heroin. It’s also one of the world’s largest sources of hashish. Besides that, it has recently become a significant exporter of crystal meth, currently the US’s fastest growing drug.

This wasn’t always so. When the Taliban first took control of Afghanistan, it briefly characterized the use of narcotics as “un-Islamic.” At the time, farmland devoted to opium poppy cultivation amounted to just over 300 square miles. The Taliban decree reduced that to a tenth as much — roughly 30 square miles — nearly all of it in Afghanistan’s northern provinces. The gesture, which appeared to be well intentioned, produced a capitalist windfall. With reduced production, the price of opium, which had been hovering around $30 per kilogram, suddenly skyrocketed to $700 per kilogram. Then came the 9/11 terrorist attack against New York’s World Trade Center. Osama bin Laden, based in Afghanistan, was accused of — and eventually admitted to — organizing the attack. President George W. Bush, who had been caught flat-footed by the attack, declared war on al-Qaeda and ordered US troops into Afghanistan to capture bin Laden and clean out the terrorist remnants of al-Qaeda.

This was the moment when Vice President Dick Cheney announced that henceforth the Bush administration was ready to explore “the dark side.” Then-Secretary of Defense Donald Rumsfeld decided to eradicate al-Qaeda by relying as much as possible on US special operations forces and CIA operators. The Taliban offered to surrender; Rumsfeld refused, insisting on total annihilation.

The most cost-effective approach appeared to be to enlist the largely Tajik and Uzbek warlords of the Northern Alliance in the fight. These were precisely the people who had continued growing opium despite the Taliban edict declaring drugs un-Islamic. The warlords, who were now America’s allies in the Global War On Terrorism, often referred to as GWOT, were not in the game just to make money. They needed the cash from selling opium to buy weapons essential to their survival. The Bush administration’s involvement might have looked like a deal with the devil, but as Cheney repeatedly emphasized, he had decided that 9/11 justified exploring the dark side, even if that involved a bit of torture and drug running. 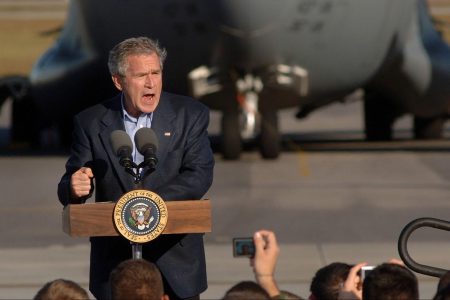 President George W. Bush speaks to airmen and their relatives at Charleston Air Force Base in South Carolina on October 28, 2006. More than four thousand service members and families attended the presidential rally were he spoke on the war on terrorism. Photo credit: US Air Force

Not surprisingly, the cultivation of Afghan opium soon skyrocketed. The “Golden Triangle,” where the borders of Thailand, Myanmar, and Laos meet, had been the previous leading source of heroin. It soon found itself replaced by the “Golden Crescent,” the area comprising the mountainous regions of Afghanistan and its neighbors Pakistan and Iran. Afghanistan was suddenly the source for nearly all the heroin flowing into Russia, Iran, Pakistan, and, more importantly, nearly all that was going into the European Union. Afghan heroin accounted for 2.5 million addicts in Russia alone and an estimated 30,000 deaths a year. The Russians, not surprisingly, held the US responsible for their drug problem, suspecting that the US had encouraged the Afghans to grow more opium in order to bankrupt Moscow. It didn’t matter if that was true or not; the simple belief that America was capable of such underhandedness had an impact on US relations with Russia.

Afghan opium soon led to a kind of policy schizophrenia in Washington. From 2002 to 2017, the US spent an estimated $8.6 billion trying to counter Afghanistan’s dependence on growing opium poppies. At the same time, the Pentagon was anxious not to offend its allies, the warlords who depended on the opium traffic to finance their operations. Frosty relations soon developed between the Pentagon and the Drug Enforcement Administration. The DEA had been promised helicopters to help locate the poppy fields. For one reason or another, the helicopters never materialized. There were even attempts to block the DEA from using the airport in Kabul. When some attempts were made to defoliate the poppy fields, some US commanders went so far as to distribute leaflets stating that they had nothing to do with the eradication.

The US already had a bad reputation from using Agent Orange to defoliate Vietnam, so Afghan President Hamid Karzai made a point of outlawing any use of herbicides. The only solution acceptable to the Afghans was to pay farmers to grow alternate crops, but by then the administration that the US had created was so corrupt that the money was simply siphoned off by local officials. Operation Iron Tempest, launched by the US in 2017, attempted to bomb sites that the US believed to be used in the drug traffic, but the campaign accomplished little and was deemed a failure.

Americans were not the only ones to run into heavy resistance when they tried to cut into the opium traffic. The Taliban also realized that to win support in Afghan villages, it had better look the other way as far as opium was concerned. In any case, while many devout Muslims consider drinking alcohol to be a serious sin, Islamic countries have always seemed to find some forms of narcotics less objectionable. A little hash or snuff on the trail over the mountains was often seen as a relatively innocent pastime.

Instead of outlawing opium, the Taliban soon began taxing the traffic at around 6 percent. According to the latest report by the US Special Inspector General for Afghanistan (SIGAR), the Taliban counts on taxing illicit narcotics for roughly 60 percent of its funding. Other estimates put the total amount at somewhere around $40 million a year. Of course, that was before the Taliban took control of the entire country.

Any attempt at controlling Afghanistan’s drug traffic ended when the US began pulling troops out of the country. In 2008, the United Nations General Assembly agreed to start monitoring illicit narcotics around the world. Afghanistan and Myanmar were the major sources of opium and heroin refined from the gum of opium. By 2019, US troop withdrawals meant that Washington was no longer able to have much influence in Afghanistan. From 2019 to 2020, the territory devoted to opium production increased by a whopping 37 percent, or roughly 860 square miles. Production had already reached 9,900 tons worth $1.4 billion in 2017.

The point is that without US troops on the ground, no one was left to count. By the last estimation, opium accounted for anywhere from 7-9 percent of Afghanistan’s GDP. Of course, that was when the lion’s share of the country’s budget was being paid by the United States and international donors. That money is expected to dry up now. Opium, crystal meth, and hashish will likely become Afghanistan’s economic lifeline as foreign aid dries up.

The question, which Biden, the Pentagon, and hopefully the US State Department will now need to decide, is what happens when a brutal, unpredictable, and dangerously unstable force like the Taliban gets its hands on a windfall that may consist of billions of dollars in potential financing? What kind of terrorism is possible when you have a virtually unlimited budget? There is a definite incentive to keep close tabs on what the Taliban are doing. Far from the end of the story, the current exit from Kabul may be only the beginning of a new and even more difficult chapter.