With explosions rattling her windows, it was difficult for Alexandra Makoviy to keep her hand steady as she drew on her two-year-old daughter’s back.

“I was so badly shaking since the first sounds of the bombing. I couldn’t control it. Just shaking,” Makoviy said.

She wrote her daughter’s name, “Vira Makoviy,” her birthday, as well as her and her husband’s phone numbers on her toddler’s back. Whether anyone could decipher the handwriting, she still isn’t sure. “It’s so horribly written,” she said.

It was February 24 — the first day of Russia’s invasion of Ukraine.

The scissors gave Makoviy the idea of writing on her daughter’s skin. The vital information card she’d put in Vira’s overalls could be removed if she was injured.

“I even thought, ‘Why don’t I produce a tattoo with this information?’” Makoviy said, imagining a scenario where she and her husband were killed, and their daughter grew up forgetting her own name.

Makoviy’s concerns were justified. Nearly two months into the invasion, it’s difficult to ascertain exactly how many people have died.

This week, Mariupol Mayor Vadym Boychenko told the Associated Press that over 10,000 civilians have died in his city alone. However, it’s clear that millions of Ukrainian children have paid a terrible price for Putin’s invasion.

To date, the UN children’s agency said that 142 children have been killed and 229 injured.

“We know that these numbers are likely much higher,” it reported.

According to UNICEF, two-thirds of Ukraine’s 7.5 million children have been displaced, sent fleeing to other countries as refugees or sought safety in other parts of the country. They may be the lucky ones.

Sergiy Kyslytsya, Ukraine’s ambassador to the United Nations, said Russia has abducted a small city’s worth of Ukrainian youth. Kyslytsya claims that Russia has “already taken more than 121,000 children out of Ukraine.”

Meanwhile, he said that Russia has drafted a bill to simplify and accelerate the procedure for the adoption of abducted Ukrainian children.

From the Donetsk and Luhansk regions, the Ukrainian foreign ministry reported that 2,389 Ukrainian children were taken to Russia.

“This is not assistance. It is kidnapping,” the US Embassy in Kyiv tweeted.

Moscow has denied allegations that it has forcibly taken Ukrainian children or refugees to Russia.

UNICEF Emergency Programs Director Manuel Fontaine said that his organization does not have access to the regions of Ukraine and Russia that would allow it to verify the reports of child abductions.

“We are looking into how we can track or help on that,” he told CBS News. 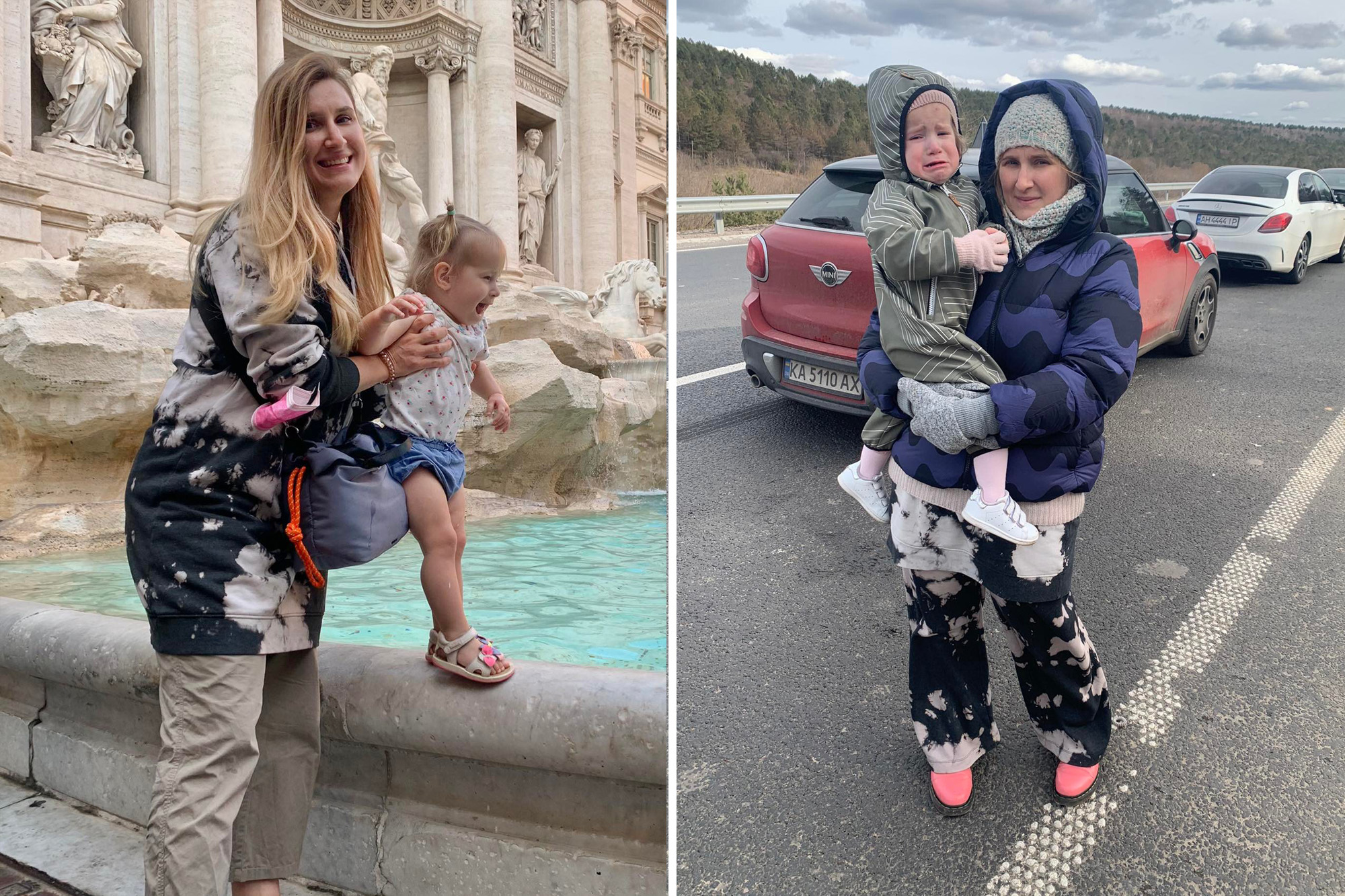 Alexandra and her daughter Vira. Left: Before the Russian invasion of Ukraine. Right: Evacuating after the start of the invasion. Photo credit: Courtesy of Alexandra Makoviy

None of this had happened when Makoviy snapped a photo of Vira’s back and posted it on Instagram. Her fears were prescient, and her post went viral, reaching over 31,000 people.

“My Instagram is like my diary,” she remarked to WhoWhatWhy in an interview via Zoom call. “First of all, I am doing publication for myself and for Vira’s remembering, and so it was really important for me, as I said a lot of times. In case of our deaths, she could find out who she is and that she could find a lot of information that she was so loved.”

Many of the people who reached out to Makoviy on Instagram were Ukrainian mothers who were inspired to do the same.

Ultimately, Makoviy decided the safest course of action would be to leave Ukraine, as her home in Kyiv lacked a basement or a shelter.

She and her family — including her sister-in-law and mother-in-law — packed into a small car and drove several hours west to the Moldovan border, where they waited 22 hours in a queue of evacuees.

“It was really exhausting. It was freezing cold. At night we weren’t allowed to turn on the engine because Russians could reach us from the sky, and see the light, and attack this queue.”

From there, she drove to Bucharest and then took a plane to Brussels. 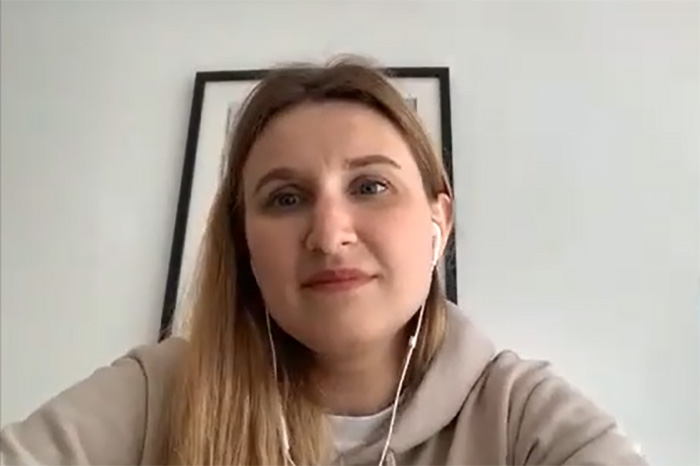 At first, Makoviy stayed with a retired couple in northern France, acquaintances who had driven to the airport to pick them up.

Then, some kind-hearted people whom she hadn’t ever met volunteered their apartment to her. The apartment is a comfortable one normally rented out to tourists near Béziers, a small town in the south of France about 6 miles from the seaside.

“We came here, and now we are surrounded by such care and love,” she said.

On Wednesday, she was busy filling out registration paperwork for the French government. Her mother, who, like some 2.5 million other Ukrainian refugees, immediately fled to Poland, had just joined them in France, she said.

Vira is just young enough to not understand the danger she was in.

“For the first weeks she could feel my anxiety, and feel that I’m scared, and so she reflected it, but now everything is OK for her,” Makoviy said, smiling.

Vira can say “Bonjour” and seems to like to say it to everyone in town. 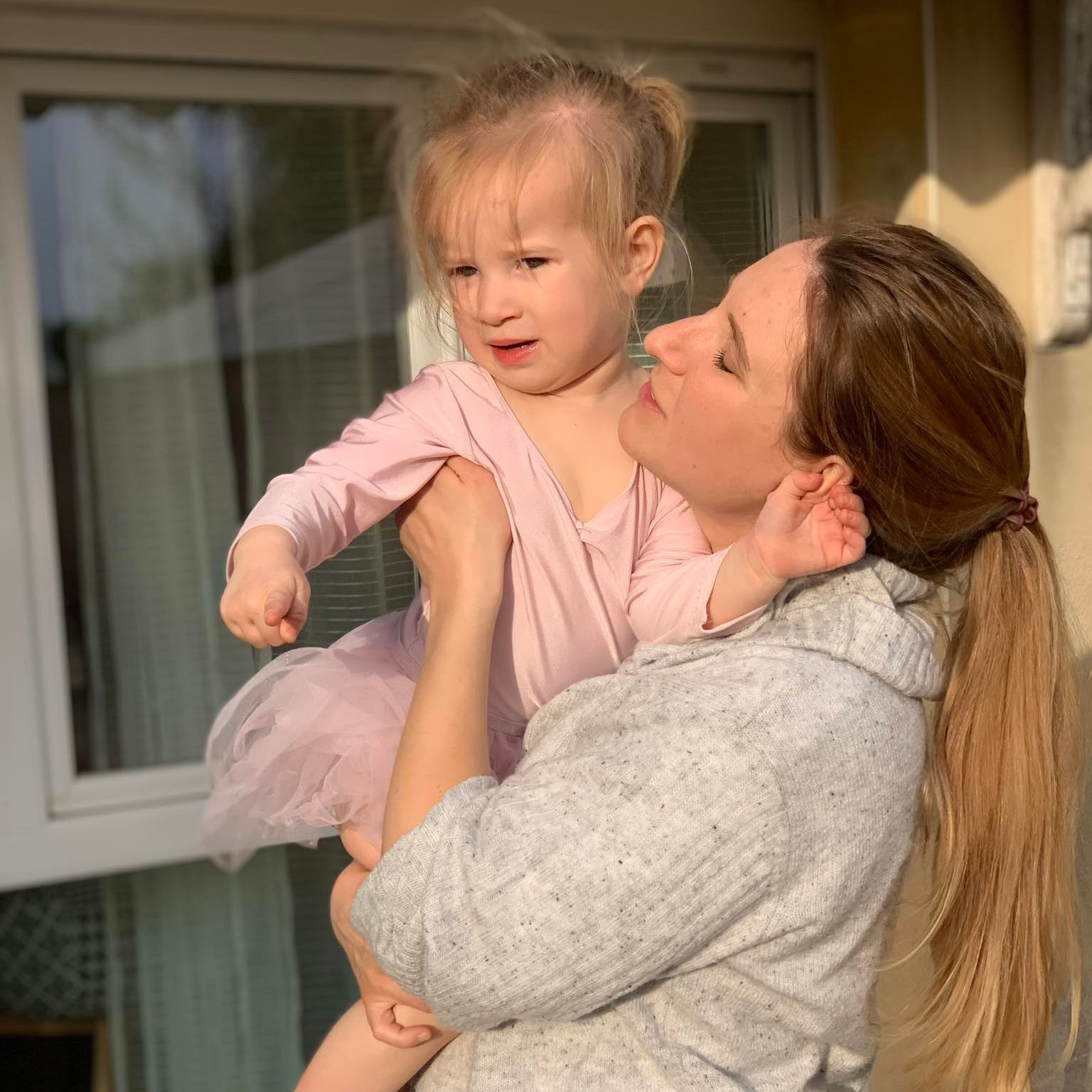 Meanwhile, in addition to learning French, like many Ukrainians, Makoviy and her mother are trying to switch from speaking Russian to speaking Ukrainian.

“Now, as the Russians say, everyone who speaks Russian, they are part of the Russian world. And they obviously come to set you free if you are speaking Russian,” Vira said with exasperation.

Makoviy wonders whether she’ll ever return to Ukraine. She hopes that if she does, her home will still be there. And she is also dealing with the trauma of her experience.

“We took a walk with a stroller in nature with Vira, and even there, I’m just afraid that some stones could be a mine or could blow up. I understand in my mind that it’s nonsense, but I can’t help it.”

But Makoviy is both hopeful and proud.

“We are really united. Before they started [the invasion], I think they didn’t realize that we could resist, and we would so bravely defend our freedom,” she said.