Soldiers shovel snow next to a monument for the fallen, at the very edge of Avdiivka. Fifty meters (164 ft) up the road is a military checkpoint, the last one before the separatist-held area. Photo credit: Emil Filtenborg / WhoWhatWhy
International

Ukraine Dispatch: Fatalism and Fatigue Along the Frontline With Russia

AVDIIVKA, Ukraine — There isn’t any sense of panic in the streets of Avdiivka, a small city in Eastern Ukraine, only a few kilometers from the border with Russia. People go around as normal, and if it were not for the visible signs of war, it would be difficult to guess that the frontline is close by. Bullet marks pock the walls of tall apartment blocks on the outskirts of the city, and artillery fire has ripped large holes in the facades of the buildings.

As many as 30,000 people still remain in Avdiivka, one of the hotspots in the fighting between Ukraine and Russian-backed separatists that has claimed close to 14,000 lives since 2014. If Russia launches a new invasion, the people living here will be among the first to know.

“We, us in Avdiivka, have no control over the potential new Russian invasion,” said 38-year-old Oleksandr Meleshko, an owner of a phone shop, when asked if he thinks Russian troops will come once again.

Speaking in Russian from his office in the city center, Meleshko told WhoWhatWhy he has heard the talk of a possible new invasion on television — about how Russia has stationed more than 100,000 troops with tanks and missiles near the Ukrainian border and how the United States has warned that a Russian invasion is “imminent.” 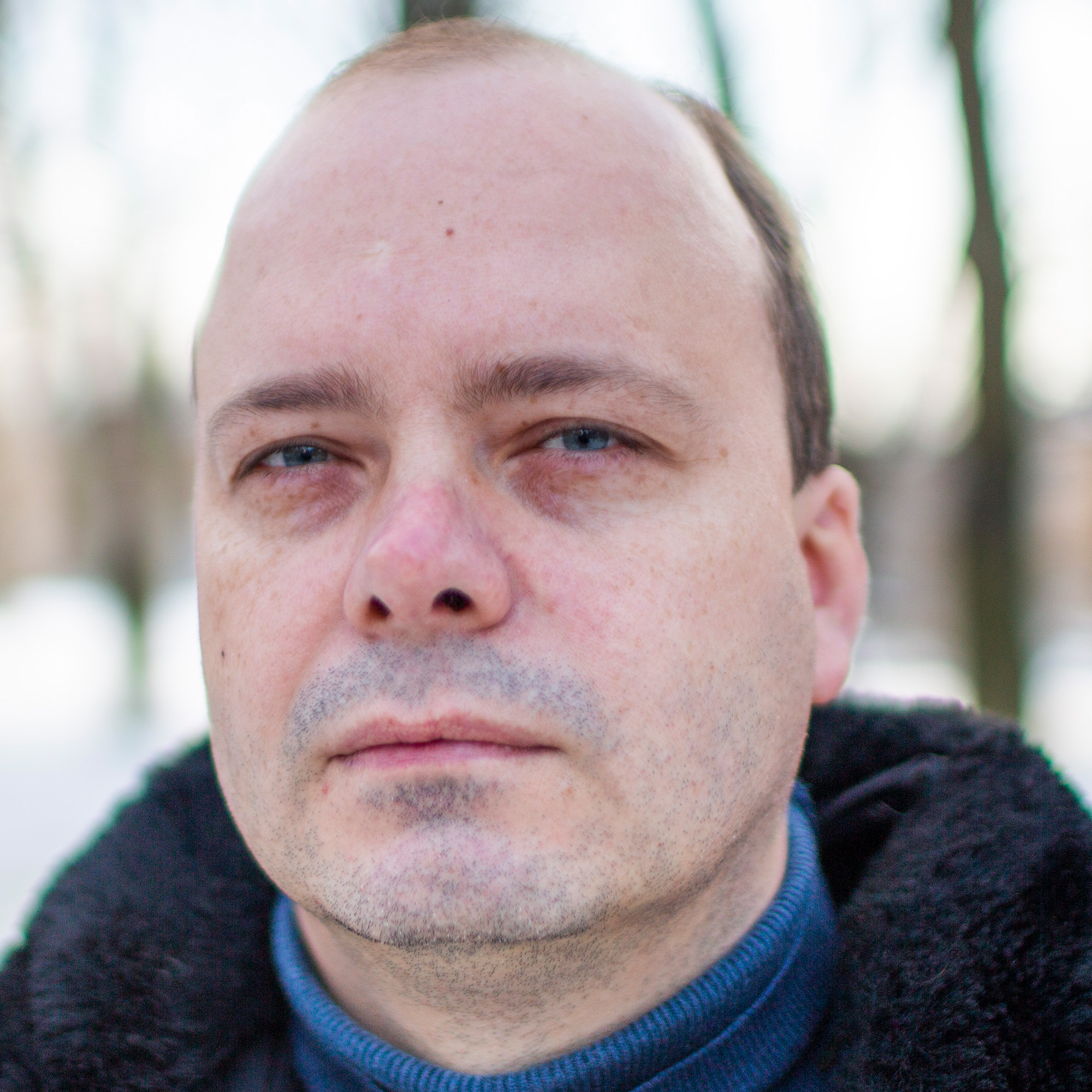 Oleksandr Meleshko, an owner of a phone shop in Avdiivka, says that things have improved in the city since the downturn in 2014 and 2015. But that might soon be reversed if a new Russian invasion starts. Photo credit: Emil Filtenborg / WhoWhatWhy

Still, Meleshko doesn’t think that anything will happen and said he tries not to think about it.

“We can only live … and do everything possible for the development of our city. Why think about the war, which we cannot influence in any way?” Meleshko asked.

War Will Not Come

Like many other people in Avdiivka, where sporadic fighting can be heard in the distance on a regular basis, Meleshko is not doing anything special to prepare. Instead, he simply goes on with life, hoping to improve his situation and assuming that the rumors of an attack will be over soon.

The same is heard at a local school and from others on the streets of Avdiivka. Meleshko says that people here have become accustomed to war, and that the threats and political maneuvering are not getting much attention.

Avdiivka lies just north of Donetsk, the largest city in the region, which is under the control of Russian-backed separatists. The Ukrainian military lost Donetsk Airport after months of fighting in 2015. Today, the airport lies in ruin, another symbol of the devastating war. 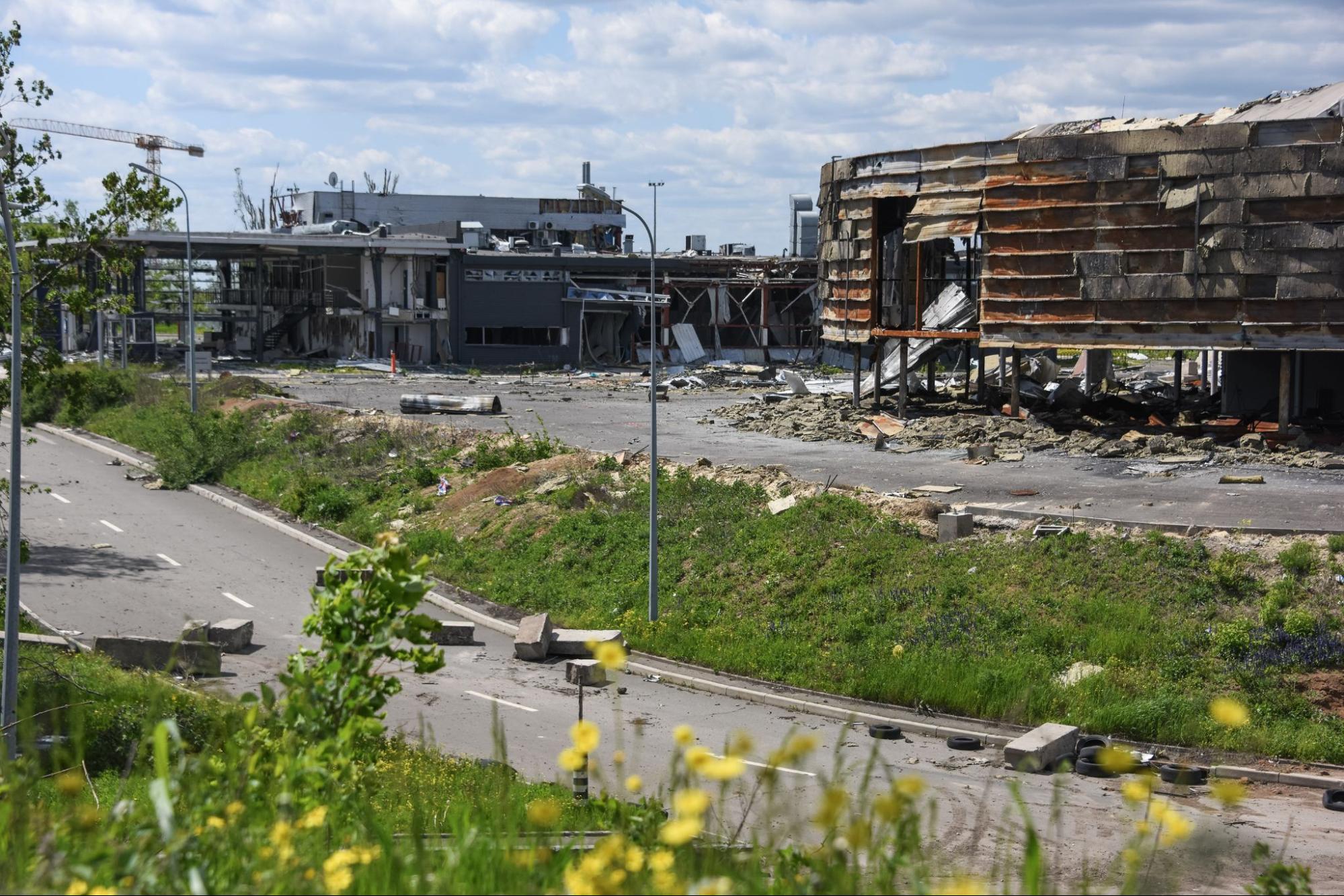 Avdiivka, which has been the center of heavy fighting for years, is still occasionally shelled by mortar grenades. This has resulted in a lack of investment in the local economy and joblessness. Many young people have left the city.

While people in the Ukrainian capital Kyiv prepare for a full-scale war, Meleshko doesn’t see the point in that.

“We are just people who want to work, who want to feed their families, who get sick, who go to hospitals, who teach their children in schools and institutes,” said Meleshko.

“And I think that the people across the border, the separatists, are the same kind of people. What is the difference? We speak the same language. We do not have direct conflicts with someone. It is going on in the television. It’s politics. Neither of us wants war,” he added.

Meleshko’s opinions are in sharp contrast to what civilians in other parts of Ukraine think about the potential war, and with what politicians and experts say on the news. Ukrainian President Volodymyr Zelensky, for example, recently said: “We’re doing everything to prepare for an attack. … We have a powerful army and it has everything [that] it hasn’t had before.”

A poll by the Kyiv International Institute of Sociology (KIIS) found that 48.1 percent of Ukrainians surveyed believe the threat of a Russian invasion is real, while 39.1 percent do not find it likely. 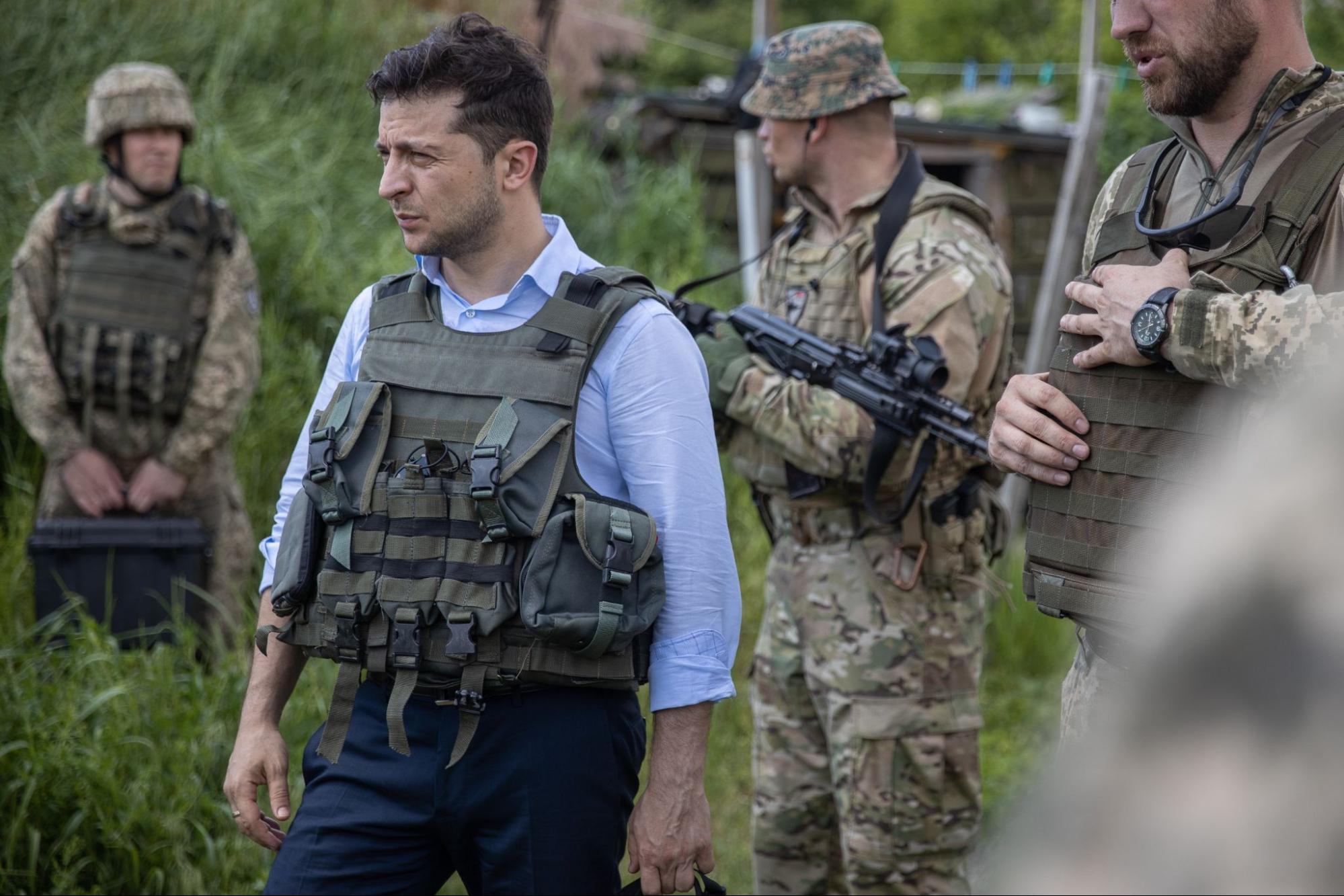 Ukrainian President Volodymyr Zelensky visits the leading positions of the Armed Forces in Luhansk region on May 27, 2019. Photo credit: President of Ukraine

‘We Are Not Afraid’

Out on the snowy streets of Avdiivka, some people argue that no one has any interest in any renewed fighting and they cannot understand what Russia would gain. They say the local economic situation is grim; there isn’t always running water, and there are no jobs. Even pensioners have a hard time making ends meet.

“Russia will not attack, I believe that it will not happen,” said 72-year-old Vera Artemovna, who experienced intense fighting back in 2014 and 2015.

Artemovna says that she’s spent the years since then in and out of psychiatric hospitals and cannot bear the thought of a new invasion.

“I believe in God. He will save us. I go to church. I pray to God. I ask Him. Every day, I ask the Lord to take care of us. No more need for this. I do not want our children, grandchildren to see what I saw,” she said, holding her head and shaking it.

Andrey Buzarov is an expert with the Ukrainian KyivStratPro analytical group. He thinks that people in Eastern Ukraine, close to the border, simply react differently than the rest of Ukraine. “It might seem strange when they are the people most affected,” he said.

“They have immunity toward threats. Nobody wants war or wants to fight, they think, so no need for panic,” said Buzarov, who is an expert on the last war and comes from Eastern Ukraine. “They know that there is a threat, but it is also not the first time that they have heard this over and over in the last seven years. They have built this immunity to such rumors.”

Musa Magomedov, who represents Avdiivka in the Ukrainian parliament, agrees.

“The people of Avdiivka know how to live for months without electricity and gas, and in the winter to be left without heating, and all this time continue to work and work,” said Magomedov. “And all these years we hear that the city will be captured. Therefore, for local residents, the latest information about the Russian invasion is commonplace, which has little effect on the course of life. Few people believe in it, including me.” 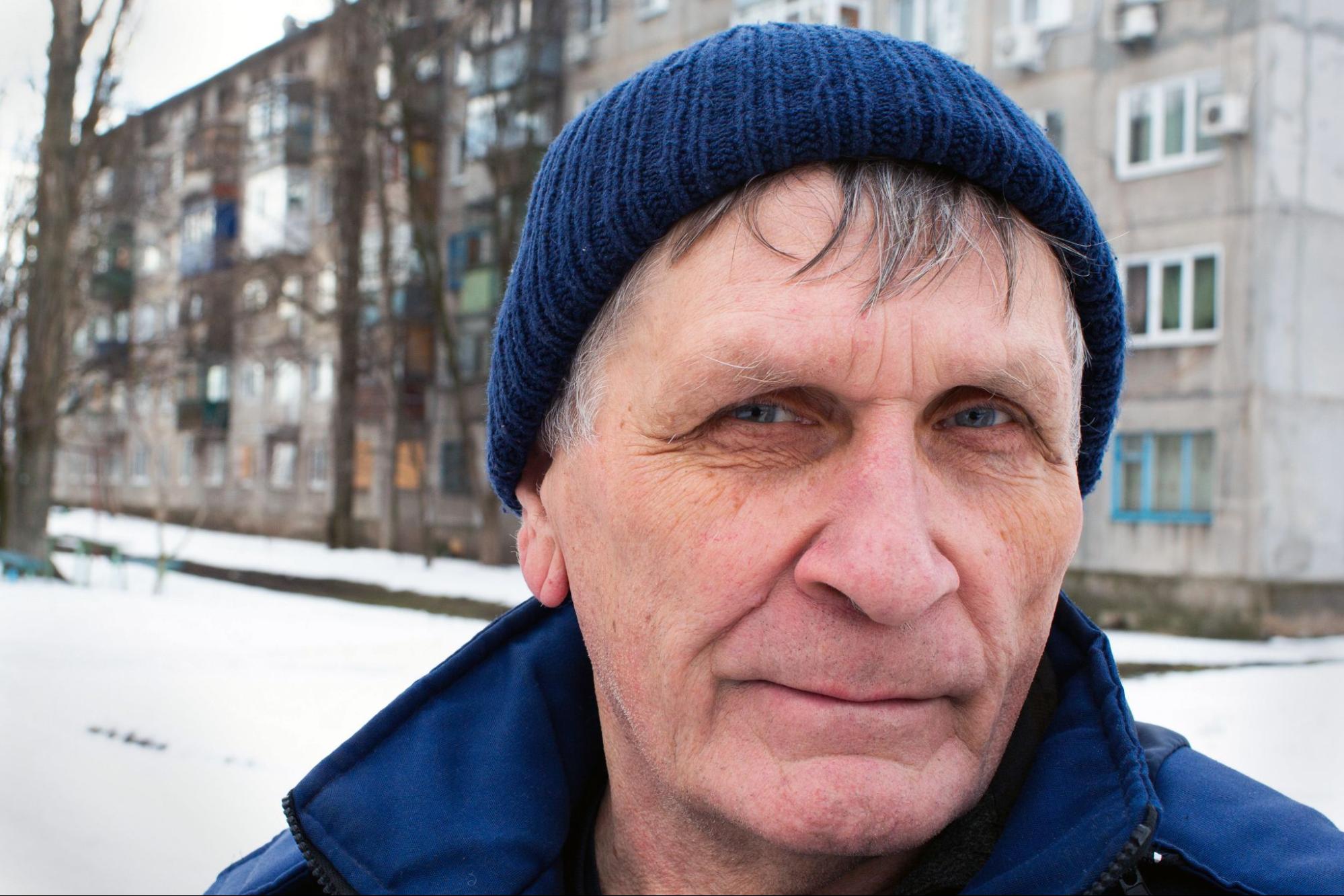 Oleksandr Veselov was checking the garbage containers when WhoWhatWhy came to speak to him. Photo credit: Emil Filtenborg / WhoWhatWhy

‘The Americans Are to Blame’

Oleksandr Veselov is a 68-year-old sanitary worker in Avdiivka. He argues that a new invasion will not come, and that it must be just politics.

“As I understand it, those who say that Russia will attack — they probably want Russia to attack and then impose sanctions,” said Veselov, who sees the United States as the party that might want war.

“Then Russia will impose sanctions.This will all affect us here in Ukraine, here in Avdiivka. It will have a negative impact on our lives. We don’t have any interest in this,” he said. “We all lived together in the Soviet Union, everything was fine.” Veselov, like many we interviewed, spoke to us in Russian.

While people want peace, negotiations have broken down since 2020 over disagreements between Russia and Ukraine, largely over the future status of the two Russian separatist republics, the one in Donetsk and the other in Luhansk in the Donbas region, which is also near the Russian border.

Some people in cities like Avdiivka argue that these disagreements are not between the people living on the Ukrainian side and in the separatist republics, but between politicians in Kyiv and in Moscow.

“You have one nationality in your country,” said Veselov. “You might be one people, but we have many nationalities here. We are Ukrainians, but speak Russian and have many things in common with Russia.” He described the Ukrainian and Russian peoples as “brothers.”

“I have three friends who have been shot. Killed by shellings, mines. There were normal young people. They are gone now. Children have become orphans,” said Veselov. “I’m not afraid at the moment; I just feel hate. We should have respect for every person. That is what everyone here wants, and therefore I do not think that a new invasion will come.”