During the days of the former Soviet Union, Russia was the first to launch a satellite into space, followed by the first man in space and then the first woman in space. It then launched the first orbiting space station. Soviet scientific space probes soft-landed on Venus and Mars and photographed the Moon’s dark side. In its twilight years, the USSR even launched a space shuttle. That was then. Today, Russia’s space program is in decline.

The man behind Russia’s decline in space is Dmitry Rogozin — the world’s most improbable space official — who since 2018 has been in charge of a Kremlin-controlled space monopoly. Rogozin’s agency, Roscosmos, trumpets megaprojects that somehow never quite manage to take off — giant spaceships with methane engines; a brand new, solely Russian space station; manned missions to the Moon and unmanned flights to Mars.

“We don’t know how it happened, for what and why one of the largest and most symbolic jobs in Russia — the job of the space program’s head — is occupied by this, we beg your pardon, booby,” jailed opposition leader Aleksei Navalny wrote about Rogozin on August 31.

Though Rogozin faces admittedly stiff competition from the likes of Elon Musk, Jeff Bezos, and Richard Branson, his real problem is that Roscosmos is mired in corruption and a loss of confidence due to a string of failed launches. That has not stopped Rogozin from posturing, styling himself as the biggest modern competitor to NASA, the United States, and Musk.

In June, Rogozin lambasted manned flights to Mars as “absolutely absurd.” He dismissed the US State Department as “assholes” for not mentioning Yuri Gagarin, the first man in space, in a tweet congratulating Russians for the 60th anniversary of his April 12, 1961, flight. Rogozin  claims that Venus is a “Russian planet” because Soviet probes were there first.

The beginning of Rogozin’s career was far from astronomical. A failed journalist who dreamt of serving as a spy in Latin America, he fought for pro-Russian separatists in ex-Soviet Moldova in the early 1990s. He then led Rodina (Motherland), a far-right party that pledged to rid Moscow of “migrant trash.”

After serving a term as a lawmaker in the State Duma, Russia’s lower house of parliament, Rogozin served as Putin’s deputy prime minister in charge of Russia’s defense industry and as Moscow’s envoy to NATO. 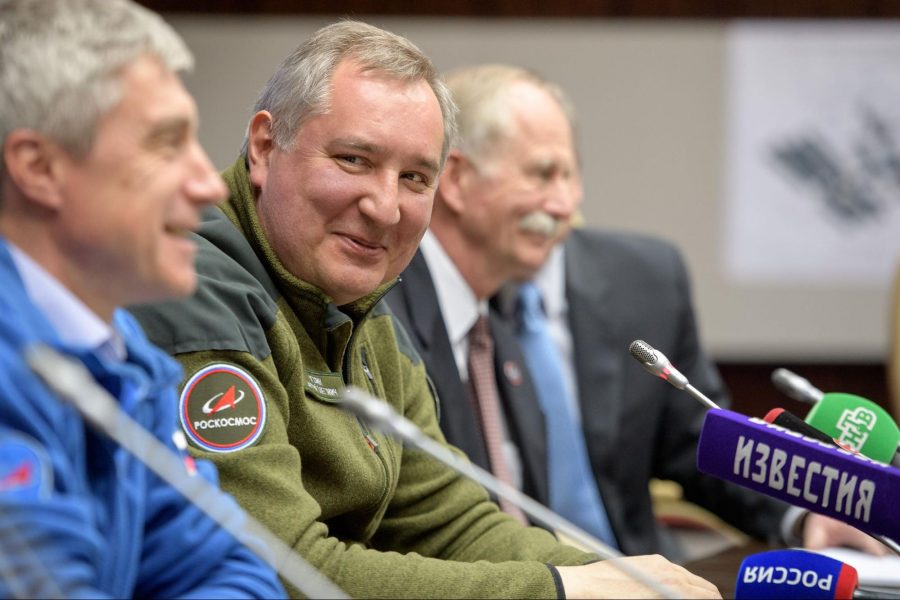 The West blacklisted Rogozin as part of wider sanctions over Moscow’s 2014 annexation of Crimea. The sanctions included a ban on high-tech imports for Russia’s space program, and Rogozin tweeted that, without Russian assistance, NASA should “use a trampoline” to deliver astronauts to the International Space Station.

NASA mothballed space shuttles in 2011, and Russia was its only “space cab” until Musk’s SpaceX company launched its first manned flight in 2020. Musk’s reply to Rogozin: “The trampoline is working!”

Rogozin doesn’t influence the implementation of individual space projects, but his statements make him one of Russia’s most outspoken officials — and consequently a target for criticism and ridicule.

“One can even pity him. All the crap is channeled at him,” Pavel Luzin, a Russia-based expert with the Jamestown Foundation, a think tank in Washington, DC, said. “But he is arrogant and not very smart — and yes, that’s what causes much of the negative [criticism] towards him.”

With a dearth of powerful leadership, a string of failed launches, and the loss of dozens of private satellites, Russia is losing its place in the global space industry.

Between 2006 and 2010, Russia dominated the commercial space industry with 42 percent of all launches worldwide, but by 2020, its share dropped to 14 percent while the US share rose from 20 to 32 percent and China’s from 20 to 35, according to the Moscow-based Novaya Gazeta daily.

In part, the issue has international roots. Western sanctions have resulted in nearly assembled spacecraft standing idle because of a lack of “certain microchips that we just can’t purchase,” Rogozin said in June. 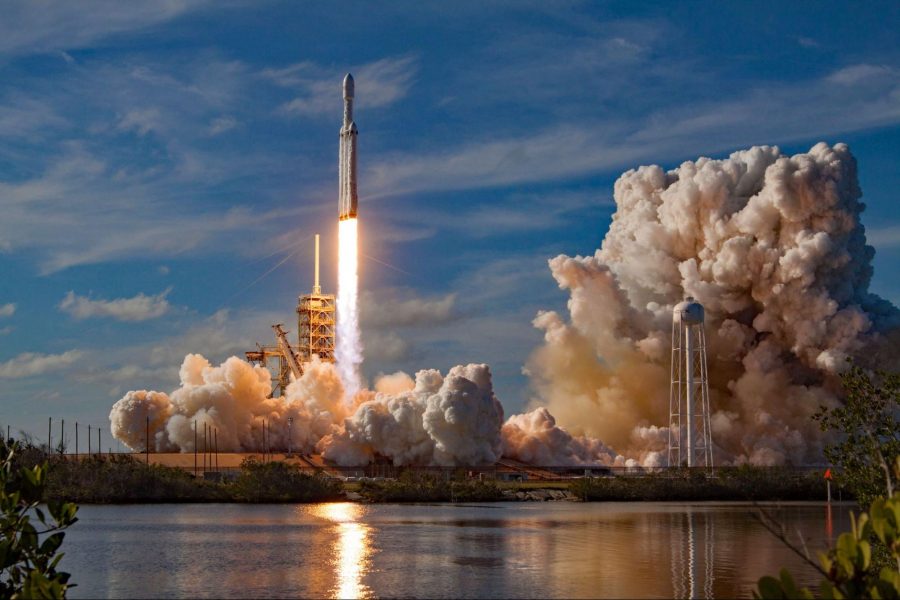 Ukrainian producers of many key components, including engines and electronics, severed their ties with Moscow’s space program after Russia annexed Crimea in 2014.

“Russia never managed to create a replacement for the Ukrainian components as a unique product,” Kyiv-based analyst Aleksey Kushch said.

There’s also a loss of status associated with the industry. Russian space designers and engineers are no longer treated like rock stars. The average Roscosmos employee is 44 years old and earns the equivalent of $850 a month. A rookie cosmonaut gets slightly less.

But the main reason for Russia’s poor performance is corruption.

Hundreds of investigations have targeted Roscosmos staffers. The company’s magnum opus, the Vostochny (Oriental) spaceport on the Chinese border, is barely functioning. Its maiden launch was postponed in 2016 just minutes after Putin arrived on the scene. Putin, furious,  fumed that the culprits “will have to replace their warm bed sheets with a prison bed.” 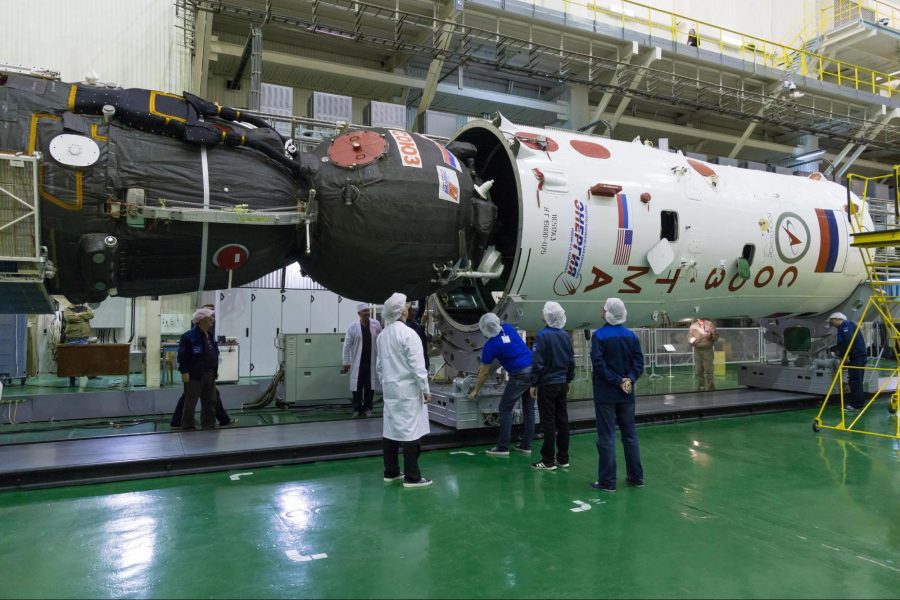 Integration Facility at the Baikonur Cosmodrome in Kazakhstan, operated by Roscosmos; RSC-Energia technicians look on as the Soyuz TMA-19M spacecraft is encapsulated into the upper stage of its Soyuz booster rocket December 8, 2015. Photo credit: ATTRIBUTION GOES HERE

Three years later, Putin admitted that the Kremlin had failed to stop the theft of “hundreds of millions” at Vostochny. “There’s been court rulings, some people are already in jail. But no, there’s still no order,” he said.

The Kremlin’s response has been quintessentially Russian: Instead of making the industry more transparent, it classified nearly every aspect of Roscosmos’ work in July.

For years, Russia had a deep-pocketed customer who had nowhere else to go: Uncle Sam. The US was forced to rely on Russian space launches following the crash of the Columbia space shuttle in 2003. It then took NASA longer than expected to develop a replacement for the shuttle program. Finally, it was decided to let private corporations compete for future launches into space.

While still dependent on Russia, NASA paid Roscosmos up to $90 million for each astronaut delivered to the International Space Station — something Rogozin lauded as proof of Russia’s “space supremacy.” He apparently forgot that the “supreme” space cab was the single-use, kerosene-propelled Soyuz designed in 1966.

However, the simplicity and decades-old operation history made the Soyuz extremely reliable.

“Rain or shine or sleet or snow don’t matter,” Mark Bowman, NASA’s then-deputy director of the Human Space Flight Program, told me in 2007 at Baikonur, the world’s first spaceport, which occupies an area larger than Delaware in sun-parched southern Kazakhstan.

Hours later, a Soyuz blasted off, reaching the orbit faster than a cigarette burned — even before its booster rockets fell in a halo of smoke.

But in 2018, a Soyuz’s booster rocket malfunctioned two minutes into the launch, and an American and a Russian aboard experienced a 6.7 G-force during their emergency landing. 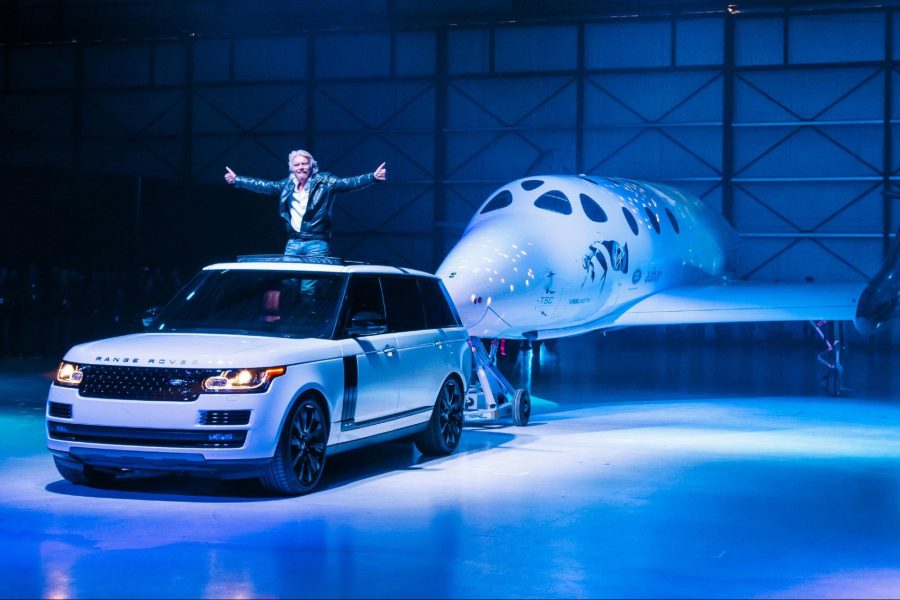 After Richard Branson’s July 11 suborbital flight aboard his Virgin Galactic spacecraft, Rogozin urged Russian oligarchs to invest in space instead of “spending their money … on yachts or vanity fairs.”

Well, there is a Russian-born billionaire, Yuri Milner, who funds programs such as the search for life on Venus and the launch of light-driven “nanocrafts” to Alpha Centauri at one-fifth the speed of light. Alas, Milner prefers to give his money to MIT and Caltech, not to Roscosmos.

Meanwhile, several promising Russian private space companies folded or were forced out of business after working with Roscosmos.

Dauria Aerospace once sold its cloud-based platform for satellite imagery to urban planners and agriculturalists and launched or developed mini-satellites for American, South Korean, Indian, and Chinese companies.

Dauria’s founder, Mikhail Kokorich, once called Roscosmos a “mammoth that should go extinct.” After a long litigation seeking damages for two satellites that Dauria said had been lost because of Roscosmos’s malfunctioning equipment, the company filed for bankruptcy in 2020.

“In the state sector, the mechanics of economic operations are very different from those of the market [economy], and, in my opinion, Dauria didn’t consider it,” Moscow-based space expert Pavel Gribov said, diplomatically.