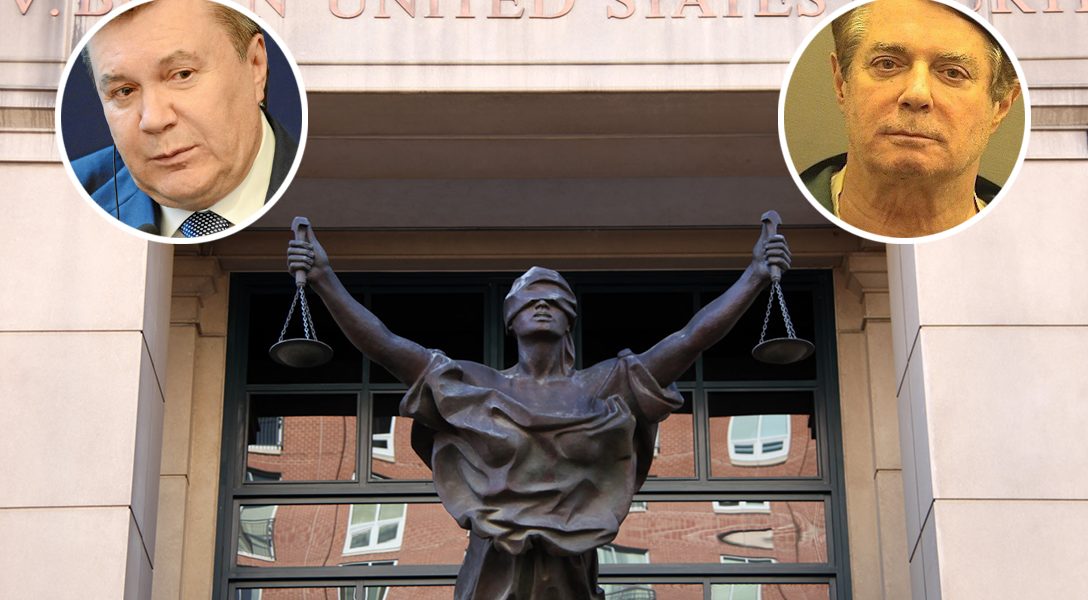 The American Lobbyist Who Undermined a Democracy

Recent developments in a Ukraine courtroom have shed new light on US special counsel Robert Mueller’s investigation. Prosecutors in the Ukrainian capital of Kiev have filed a court motion against Viktor Yanukovych, a Ukrainian politician closely allied with Russian President Vladimir Putin.

Yanukovych is also the subject of two criminal cases filed against Paul Manafort, former campaign manager for Donald Trump, in Virginia and the District of Columbia.

Ukrainian authorities seek to arrest and serve Yanukovych with a 15-year prison sentence for crimes involving high treason, complicity in an aggressive war against Ukraine, and complicity in premeditated activities aimed at altering Ukraine’s state borders.

Prosecutors for the District of Columbia will focus on Manafort’s work in Ukraine for Yanukovych, which began in 2005. As a senior advisor to his presidential campaign, Manafort helped Yanukovych win the 2010 Ukrainian presidential election. Manafort subsequently signed a $4 million annual advisory agreement to sell Yanukovych’s pro-Kremlin policies in the US.

According to court documents, Manafort was paid a total of $65 million. He allegedly hid the payments in offshore tax havens and lied about it to the US government. After Yanukovych was ousted in 2014, the cash from Ukraine stopped flowing. Manafort is accused of falsifying financial statements to qualify for tens of millions of dollars in bank loans — loans that helped pay for his absurdly extravagant lifestyle. He allegedly even tried bribing a senior bank official with a secretary position for the US Army.

Mueller’s office has almost three times the number of exhibits it wants to show a jury in Manafort’s DC trial, compared with what it used in Virginia. Manafort is charged with money laundering, fraud, illegal lobbying, and obstruction of justice. He faces up to 20 years in prison.

Understanding how the Russian government profited from both Yanukovych’s and Trump’s presidential election victories necessitates a closer examination of Manafort’s work in Ukraine.

Getting rich was Manafort’s primary goal. He made a career out of inventing loopholes to bypass campaign finance reforms, funneling dark money through Political Action Committees (PACs). He viewed political opponents as enemies and peddled conspiracy theories and propaganda to destroy his candidates’ adversaries.

Trump first hired Manafort in the 1980s, when he sought political influence to solve a land zoning problem he had with one of his Atlantic City casino properties. The two were introduced in the late 1970s through Roger Stone: a mutual friend and Manafort’s business partner. In 1980, Manafort and Stone collaborated with fellow lobbyists Charles Black and Peter Kelly to form the K Street powerhouse firm Black, Manafort, Stone and Kelly. Their clientele ranged from Reagan administration officials to some of the most ruthless autocrats around the globe. BMS&K were ultimately defined as the architects of what has been called the Torturers’ Lobby. Stone, the infamous Nixon-era agent provocateur and dirty trickster, has fanned the flames for a Trump presidency since 1987. Stone is currently under investigation by the special counsel’s office. Who Is Viktor Yanukovych?

Viktor Yanukovych hailed from the mafia-ridden, industrial Donetsk Oblast region of Eastern Ukraine. A former coal miner turned politician, Yanukovych supported the pro-Putin Party of Regions doctrine, which earned him the endorsement of the Kremlin. Yanukovych attempted his first presidential bid in 2004 while he served as Ukraine’s Prime Minister. He squared off against a pro-democracy candidate named Viktor Yushchenko. Yushchenko was the leader of the Our Ukraine political coalition — a defender of anti-corruption policies, pro-Western alliances, and a stronger commitment to NATO.

During the campaign, Yushchenko mysteriously fell ill and was transported to a hospital in Geneva, where he remained for several months. Toxicologists determined Yushchenko had been poisoned with Tetrachlorodibenzodioxin, the lethal toxin found in Agent Orange. Yushchenko — who remains permanently disfigured — believes surrogates close to Putin poisoned him to ensure a Yanukovych victory.

Yushchenko returned to Ukraine and campaigned during the final months of the election, wherein Yanukovych was ultimately declared the winner. However, due to evidence of widespread corruption and voter fraud, Yanukovych’s victory led to a revolt of thousands of protesters in Kiev’s Independence Square, which started the Orange Revolution movement. The Ukrainian Supreme Court nullified the election, ordered a second run-off, and Viktor Yushchenko was deemed the proper victor. Yanukovych resumed his position as prime minister in 2006.

Manafort and the Mob

Paul Manafort was summoned to Ukraine in 2005 by Rinat Akhmetov. As the mafia godfather of Eastern Ukraine’s Donetsk Clan, Akhmetov is one of the wealthiest men in Ukraine and closely allied with Putin. Akhmetov recruited Manafort to revamp Yanukovych’s image, and help prepare him for a second presidential run in 2010.

Manafort became Yanukovych’s closest political adviser. He established campaign headquarters in Kiev that was staffed by six American consultants and a group of Ukrainian translators and drivers. Konstantin Kilimnik, an intelligence officer trained by the Soviet Army, worked as Manafort’s translator and right-hand man. Manafort’s proximity to Kremlin insiders burgeoned into lucrative business deals with Russia’s wealthiest, most powerful elites — investments that enriched both him and Putin’s government. In 2005, he struck a $10 million annual contract with the wealthy Russian steel magnate Oleg Deripaska to promote Russian interests in politics, business, and media coverage in Europe and the US.

Manafort also secured a major natural gas deal with Dmitry Firtash, a wealthy oligarch who was a middleman for Semion Mogilevich. Mogilevich, the Russian mafia’s “boss of bosses,” is the most dangerous member of organized crime there, according to the FBI. Gazprom, Russia’s state-owned natural-gas conglomerate, sold fuel to Firtash at a discounted rate. In turn, Firtash resold the gas to the Ukrainian government, and used the profit to fund Viktor Yanukovych’s campaign.

Yulia Tymoshenko, a pro-democracy Ukrainian politician, who allied with the Svoboda political party, entered the 2010 presidential race as Yanukovych’s political opponent. As a co-leader of the Orange Revolution, Tymoshenko became the first woman appointed prime minister of Ukraine, serving from January to September 2005, and again from December 2007 to March 2010. Tymoshenko, like Firtash, was a natural-gas broker, and the two became arch rivals. In a deal to cut out Firtash and the mafia, Tymoshenko attempted to strike a gas deal directly with Putin, but was unsuccessful.

The Election That Destroyed Ukraine

The results of the 2010 presidential election were a repeat of 2005, but with much more dire consequences for the citizens of Ukraine. On February 14, Yanukovych was declared president, but, again, evidence of election fraud and corruption stirred an uprising. As pro-Russian separatists gunned down protesters in the streets of Kiev, Yanukovych strengthened his alliances with the Kremlin by accepting a Russian bailout, abandoning a pending agreement with the European Union. Yanukovych’s government enforced illegal restrictions on freedom of speech, which heightened Kremlin-backed aggression and violence.

Meanwhile, Firtash attempted to destroy Tymoshenko by convincing Yanukovych’s government to convict her on charges of embezzlement and abuse of power. On October 11, 2011, Tymoshenko was sentenced to seven years in prison and ordered to pay the state $188 million.

Tymoshenko’s prosecution and conviction were broadly viewed as politically biased. The European Union, the US, and international organizations such as Human Rights Watch and Amnesty International repeatedly called for Tymoshenko’s release. She was ultimately freed from prison in February 2014, with the aid of a $1 billion appropriations package from USAID, plus funding from the National Endowment for Democracy and the Millennium Challenge Corporation. Tymoshenko returned to Kiev to join what is now known as the Euromaidan Revolution.

Yanukovych abused the power of the presidency to enrich himself and those in his close circle — which he refers to as “the family” — after embezzling $1.5 billion in assets. The Ukrainian government contested Yanukovych’s victory, which was ultimately deemed illegitimate, but only after Russia had seized Ukraine’s Crimean Peninsula. Yanukovych fled Ukraine in 2014 and remains exiled in Russia.

Russia’s Influence Inside the White House

After Yanukovych fled Ukraine, Manafort’s spigot of cash ran dry. By 2016, Manafort needed to make money while retaining business prospects inside the Kremlin. There was a job available that would allow him to do just that: In March, Manafort joined the Trump campaign and became its putatively unpaid manager. He found himself working for a candidate who was supported by Putin and amenable to undermining ties with NATO and traditional US alliances.

Manafort was in debt to Deripaska for $19 million, after he failed to invest the oligarch’s money in a joint venture to acquire the Ukrainian company Black Sea Cable. Less than two weeks before Manafort signed on as Trump’s campaign manager, he promised Deripaska he would provide briefings of his campaign efforts. According to court documents, Manafort messaged Deripaska in April 2016, asking “How do we get to whole?”

Whether Manafort negotiated a pro-bono deal as Trump’s campaign manager in exchange for favorable relations between the US and Russia is unknown. Manafort’s reference to “get to whole” with Deripaska suggests he arranged a quid pro quo deal for electing Trump. But Manafort’s decades-long relationships with Russians closely allied with Putin help illustrate how joining Trump’s campaign in March 2016 was a lucrative deal for Manafort, the Kremlin, and possibly Trump.

The parallels between Yanukovych and Trump are striking. Both candidates’ campaigns were managed by Paul Manafort. Both candidates were abetted by Putin. Russian money was funneled into both campaigns, and both elections were tainted by outside propaganda and election tampering.

Yanukovych successfully advocated for the imprisonment of his former female political opponent; Trump pressures his Congress to reopen the investigation into Hillary Clinton to “lock her up.” Manafort’s role, his connection with the Kremlin, and Trump’s unabashed admiration for the Russian president have led many to believe the 45th President of the United States conspired with a hostile foreign government to steal an election.

Manafort joined the 2016 presidential campaign just in time to secure Trump’s nomination and prepare for the Republican National Convention in Cleveland. He helped gut the anti-Russia stance from the Republican platform, as to not chastise Putin for starting the war in Ukraine. He had a condo in Trump Tower, where besides Trump, many of his neighbors were members of organized crime.

Rubles flowed through the National Rifle Association to the Republican National Committee and into GOP candidates’ coffers.

There has been much speculation on whether Trump has been an asset of the Russian government since he visited St. Petersburg in 1987. Trump has affiliated with mobsters since his father Fred Trump ran his organization. Trump took advantage of the economic collapse of the Soviet Union, profiting from multiple real estate and other business deals with members of Russian organized crime. His hosting the 2013 Miss Universe pageant in Moscow secured a written agreement to build a Trump Tower inside the Kremlin.

While the charges brought against Manafort are not related to his work with the Trump Campaign, evidence from the case could be used to determine whether Manafort and other Americans conspired with the Russian government to help Trump win the 2016 presidential election. It is unclear how Yanukovych’s trial in Ukraine will impact Manafort’s case — or how it will affect the special counsel’s broader scope of the Russia investigation.

Update following publication of this article: Manafort faces a maximum of 80 years in federal prison after a Virginia jury reached a guilty verdict Tuesday afternoon. He was convicted on eight counts: five counts of tax fraud, one count of failure to file a report of foreign bank and financial accounts, and two counts of bank fraud. Judge T.S. Ellis declared a mistrial on the 10 other charges he faced.