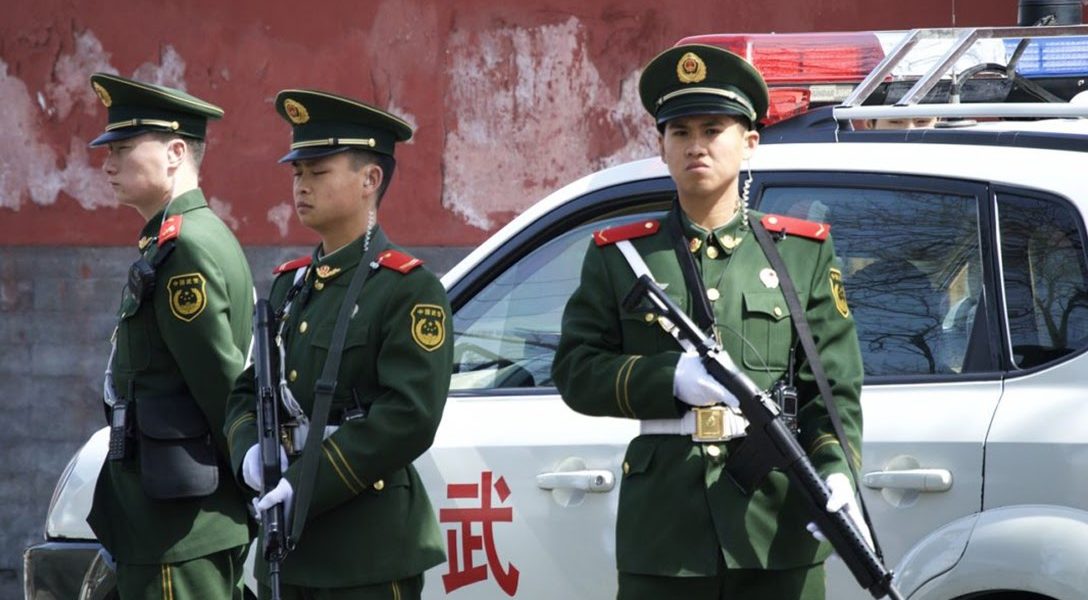 Switzerland’s latest “lives for money” scheme with the People’s Republic of China has the Bern government offering to sacrifice basic civil liberties of individuals residing and seeking asylum on its soil — with neither public nor parliamentary debate — and misappropriating taxpayers’ funds in order to do so. As reported by some Swiss and foreign journalists, this secret deal has recently come to light, thanks in part to the efforts of human rights watchdog Safeguard Defenders, a Madrid-based NGO focusing on civil liberties and the rule of law in Asia, which had procured a copy of the original agreement. Ironically, in a country that purports to uphold human rights, the issue is in danger of being swept under the rug by officialdom.

The covert five-year accord, signed in Beijing in 2015, was first publicly revealed in August 2020 only because it was on the brink of expiry and is now up for renewal. The deal allows agents from China’s police and security force — the Ministry of Public Security Administration — to enter Switzerland, interrogate suspects, and then deport Chinese citizens who allegedly have an “irregular” immigration status. Beijing operatives are free to target Chinese nationals on Swiss soil, including persecuted mainland religious figures and political activists from Hong Kong seeking asylum. Notorious for its use of torture and the disappearance of its targets, the invited Chinese agency has been operating in Switzerland without transparency and at the expense of Swiss taxpayers. (See article on Andy Cohen’s documentary on China’s “poisoned blood” HIV/AIDS scandal and how security police sought to block its filming.)

This surreptitious readmission agreement, which runs completely counter to the international norms established by the United Nations Office for Human Rights (OHCHR) in Geneva, an organization that Switzerland has hosted since 1993, exposes how this Alpine country has become in effect a clandestine extension of China’s repressive authoritarian arm.

According to Chinese-born, now Portugal-based artist, filmmaker, and writer Ai Weiwei, “There’s no such thing as taking the safe road or middle ground when dealing with human rights principles. Any nation, Germany or Switzerland, that joins together to avoid conflicts with China’s authoritarian power only serves to become part of that power. People who pretend they are taking a neutral position, who pretend the other guy has nothing to do with them, while at the same time profiting on other people’s conflicts, will end up paying a heavy price to humanity in the future.”

The United Nations: No Vociferous Condemnation in the World Capital of Human Rights

Why would Switzerland violate the fundamental pillars of the United Nations’ Universal Declaration of Human Rights — and in particular articles 3, 5, and 9?

The economic benefit appears to be the ulterior motive and justification. This agreement was a deal sweetener thrown China’s way by the Swiss to help conclude a larger and very lucrative trade package, signed in Beijing — not Bern — at the end of 2015. At that time, Switzerland was involved in a huge lobbying effort that resulted in massive economic benefits.

This was confirmed in the official Swissnews newsletter (published shortly after the secret deal was signed) wherein Jean-Jacques de Dardel, the Swiss ambassador to China, states: “High-level visits paved the way for concrete results in facilitating economic, financial, social and cultural cooperation between our two countries. Regular bilateral meetings and dialogues helped deepen our common ground and understanding of issues of joint concern.” The first sentence of the agreement states its alleged purpose to be, “In order to strengthen the bilateral cooperation against irregular migration.” However, the seven clauses that follow are completely unilateral and deal solely with China being granted access to Swiss soil.

European readmission agreements are not uncommon, but they usually include reciprocal obligations by both parties that are made public and come into force only after Parliament consents. However, according to Interpol in Lyon, these do not allow foreign security agents to operate on sovereign territory unless specifically invited on a case-by-case basis, such as drug trafficking or murder across borders. Certain nations, such as the United States, UK, and Germany, often deploy drug enforcement agents to countries with significant criminal activities on their soil, but these are attached to their embassies and only enjoy observational rather than operational privileges.

In the Swiss-China agreement, there is not one line — not one word — about Switzerland being granted the same access to Chinese soil, nor of China paying one cent for allowing its security personnel to enter the Swiss Confederation. The 2015 deal with China has allowed a foreign country, unequivocally and without reciprocity, to hunt its opposition figures on the very “neutral” Swiss soil that is supposed to offer protection. “Bilateral Cooperation” is a propagandistic catch-phrase for Chinese hegemony. The text further notes: “The Swiss side will invite the Chinese experts to assist the Swiss side in the identification of alleged Chinese citizens with irregular stay in Switzerland.” According to the treaty, these agents are allowed to operate as “experts without official status.” Wang Xiumei, a persecuted Christian and former asylum seeker in Switzerland is such a case. Wang received a deportation order from Switzerland. Once back in China in 2018, she was sentenced to prison for three and a half years. Her crime? Being active in the banned Church of Almighty God.

Furthermore, the unofficial status accorded these Chinese agents — as opposed to an official diplomatic status which would check their actions and movements — not only grants Beijing a five-year hunting license to pick off dissidents sheltering in Switzerland, but it also serves to expand the territory beyond Swiss borders to include the Schengen countries. As a result, Chinese “experts” are free to roam and hunt the full expanse of Europe, unchecked. As one security official in Paris noted when questioned by Global Insights Magazine, “The French government was almost certainly not aware that this was the case. This runs completely counter to the Schengen agreement.”

On top of Bern declaring open season on Chinese nationals, according to the agreement, unwitting Swiss taxpayers must foot the bill for these human hunting expeditions: 200 CHF ($224) per diem for each “expert,” plus the cost of flight tickets; mission-related travel expenses; accommodation; office space and facilities, including computers with internet access, printers, and telephones with access to international calls; personal medical and accident insurance; protection of personal safety; and costs of visa fees.

Given this situation, why has the UN not confronted its Swiss host? According to the OHCHR in Geneva, the UN agency simply noted that it is aware that Switzerland had signed such an agreement with China, but one “that we understand has now expired.” It added that as a general principle, any bilateral agreement regarding the removal of irregular migrants should contain “explicit human rights and refugee safeguards” based on relevant international norms and standards. Clearly, the Swiss-Chinese deal does not.

Do Swiss Taxpayers Have the Right to Know?

This plays right into the hands of the Chinese, who have acted swiftly to fill the vacuum created by the past four years of Trumpism, notably Washington’s withdrawal from the World Health Organization, the Human Rights Council, and UNESCO as well as international nuclear, climate, security and trade treaties. Today, China heads approximately one-third of the UN’s special agencies, and with further influence over partner member states, wields enough power to turn the UN tables towards the East. It has also appointed — far more than any other country — more than the usual number of state journalists to cover UN activities.

As a result, the UN is being increasingly regarded as doing China’s bidding. Chinese dissidents raising their voices in the Swiss press or through NGOs (as did Chinese political cartoonist Badiucao at a recent Swiss Press Club event organized by the International Service for Human Rights) or protesting outside the UN, could tarnish China’s image. To help quash international scrutiny of its abuses at home, Beijing regards the Swiss deal as enabling it to deport detractors.

According to the confidentiality agreement in Clause 5 of the secret deal, neither the Swiss people nor parliament needs to be notified. This blatantly violates the fundamental right of every citizen to be informed.

Caught with its pants down shortly after the news broke and its secret agreement exposed, the Swiss State Secretariat for Migration (SEM) scrambled to cover things up by obscuring the truth “Beijing style.” It immediately took to its internet site to claim, falsely, that such agreements “have been conducted for many years in Switzerland and in other European countries.”

Shortly thereafter, SEM chief Mario Gattiker tried to justify the deal’s secrecy before Parliament’s Foreign Affairs Committee by claiming the deal was not made public because it was merely an administrative agreement. Such claims have been met with stunned disbelief by not only observers but also some parliamentarians.

The Uncertain Future of the Agreement

Amnesty International Switzerland’s spokesperson Nadia Boehlen says on Swissinfo, a publicly-funded information site, that her organization sent its concerns directly to the SEM. She says the deal should only be renewed if the authorities “ensure there won’t be any more secret Chinese agents, and that the agreements are in line with human rights.” However, “As long as China does not offer guarantees about the treatment of people, it should not be signed.”

Simona Grano, China studies senior lecturer at the University of Zurich, responded: “It’s my understanding that the agreement has been put on ice due to the increasing discontent in the media and among the general public about China’s treatment of dissidents and violations of human rights in Xinjiang and Hong Kong.”

The good news for Chinese dissidents in Switzerland is that the uproar and outrage of the press and human rights groups, as well as Hong Kongers living here, has forced open discussions about the deal in Parliament, after which the Federal Council will make its decision whether to renew or not. The federal authority’s lack of transparency and its constantly changing accounts of how the well-disguised deal was applied in the past five years — and what happened to its victims — leave many questions open for Parliament, and even the UN Human Rights Council, to investigate thoroughly in the next few weeks. This violation of individual freedom has seriously jeopardized Switzerland’s proud reputation as a protector of human rights and practitioner of responsible statecraft.

Whether the deal is renewed or not, the bricks of China’s surveillance apparatus have already been laid during the last five years. The sad truth remains that these hidden structures which violate human rights are nothing new in Switzerland and should come as no surprise. This arrangement is far too reminiscent of Bern’s World War II relations with the Hitler regime and the violation of non-refoulement principles for would-be Jewish refugees. This time around, instead of helping Nazis target European Jewry, the Swiss have helped Beijing deport nationals back to China where they risk disappearance, torture, and even execution.

As long as profits continue, Swiss banks fill their coffers, streets are kept clean and tidy, and the UN brand is maintained intact, Bern won’t blink its “neutral eye.”

Andy Cohen is an American documentary filmmaker, journalist, and author based in Geneva. Much of his work is investigative and human rights-based. For more information about AC Films, please go to his website.