Ammunition is arranged on the ground during a mine clearance mission near Bervytsia, in northern Ukraine, on April 21, 2022. Photo credit: © Evgen Kotenkoukrinform/DDP via ZUMA Press
Apprentice Stories International Ukraine

As Russia’s war of aggression against Ukraine enters its fifth month, a human rights group is highlighting yet another war crime apparently committed by Russian President Vladimir Putin’s troops.

In violation of international law, Russian forces have used banned landmines in at least four regions of Ukraine, killing a still unknown number of civilians and threatening the regional food supply, according to a recent report.

Using video evidence provided by citizen observers and posted on social media as well as testimony from Ukrainian police, Human Rights Watch determined that the Russian army deployed banned anti-personnel mines in civilian areas, including around major cities such as Kyiv and Kharkiv, as well as in Sumy and Donetsk.

Though both Ukraine and Russia have deployed anti-tank and anti-vehicle mines, there is no evidence that Ukraine — a signatory to the 1997 international Mine Ban Treaty — has used anti-personnel mines since it was invaded four months ago. The signatories of the treaty vow to cease production and use of anti-personnel mines.

“Russia’s brazen use of anti-personnel mines in a country that has explicitly prohibited these weapons is unprecedented and deserves strong global condemnation,” Steve Goose, co-founder of the Nobel Prize-winning International Campaign to Ban Landmines, said in a statement.

At least seven civilians have been killed in three recorded instances as a result of unmarked minefields and discretely placed booby traps, though a full count is impossible to tally during wartime, the organization said.

Human Rights Watch called on Russia to cease use of the mines, and to ensure “the effective exclusion of civilians from these mined areas.” The group also urged Ukraine to continue exercising restraint and resist deploying its own mines, while warning Belarus, a Russian ally that signed the ban, not to assist Russia in mining Ukraine. 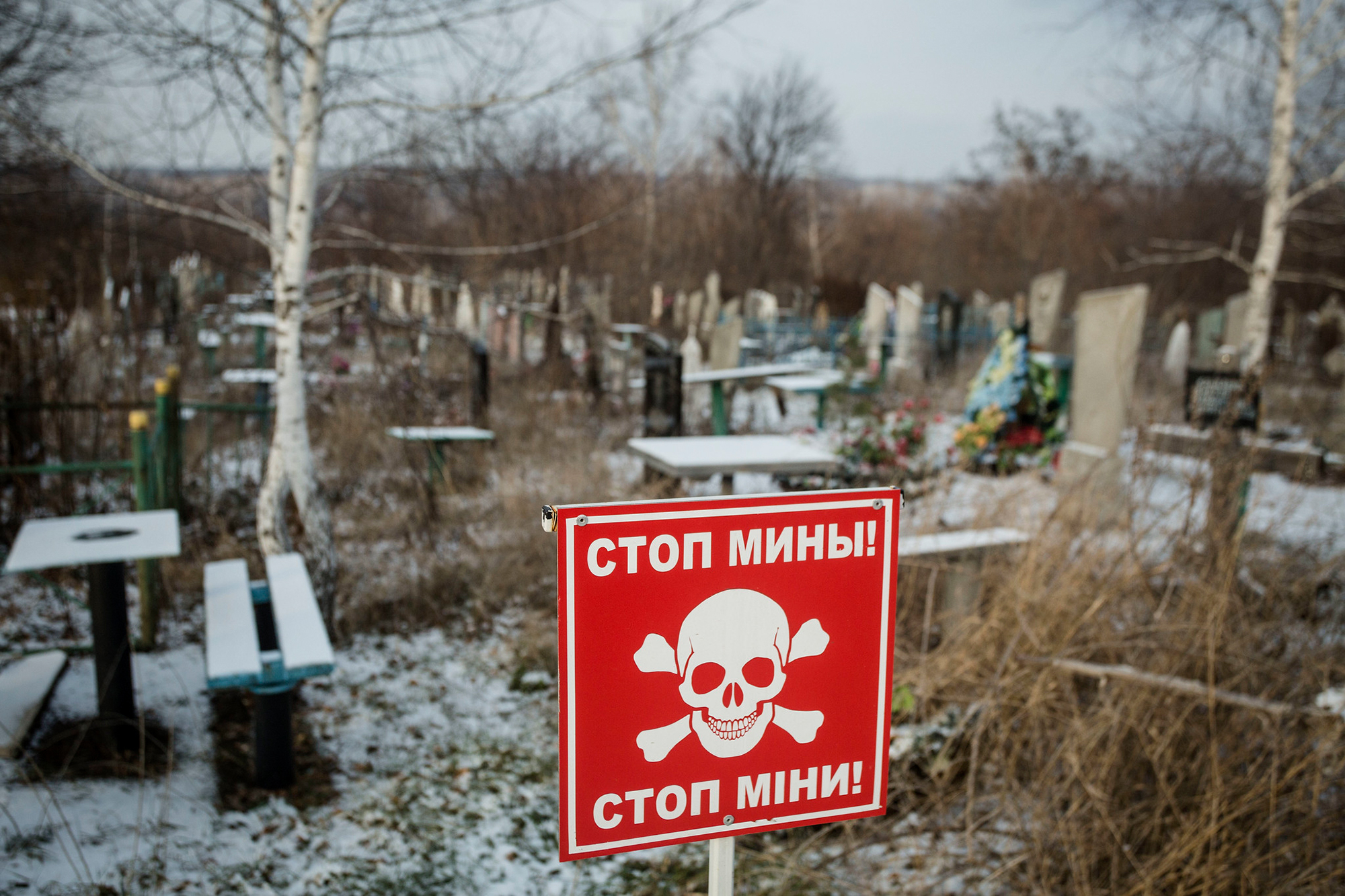 Russia also used mines in Ukraine during the 2014 conflict, the group said.

Neither Russia nor the United States have signed the mine ban treaty, though in a reversal of a Trump-era policy, the US will limit its use of landmines to the border between North and South Korea, President Joe Biden announced on Tuesday.

In widespread use during World War II and subsequent conflicts, anti-personnel landmines have been condemned for killing civilians indiscriminately, in some instances many years after the cessation of combat.

On June 7, several civilians were injured near Kyiv when their vehicle struck a mine, according to the Kyiv Independent. 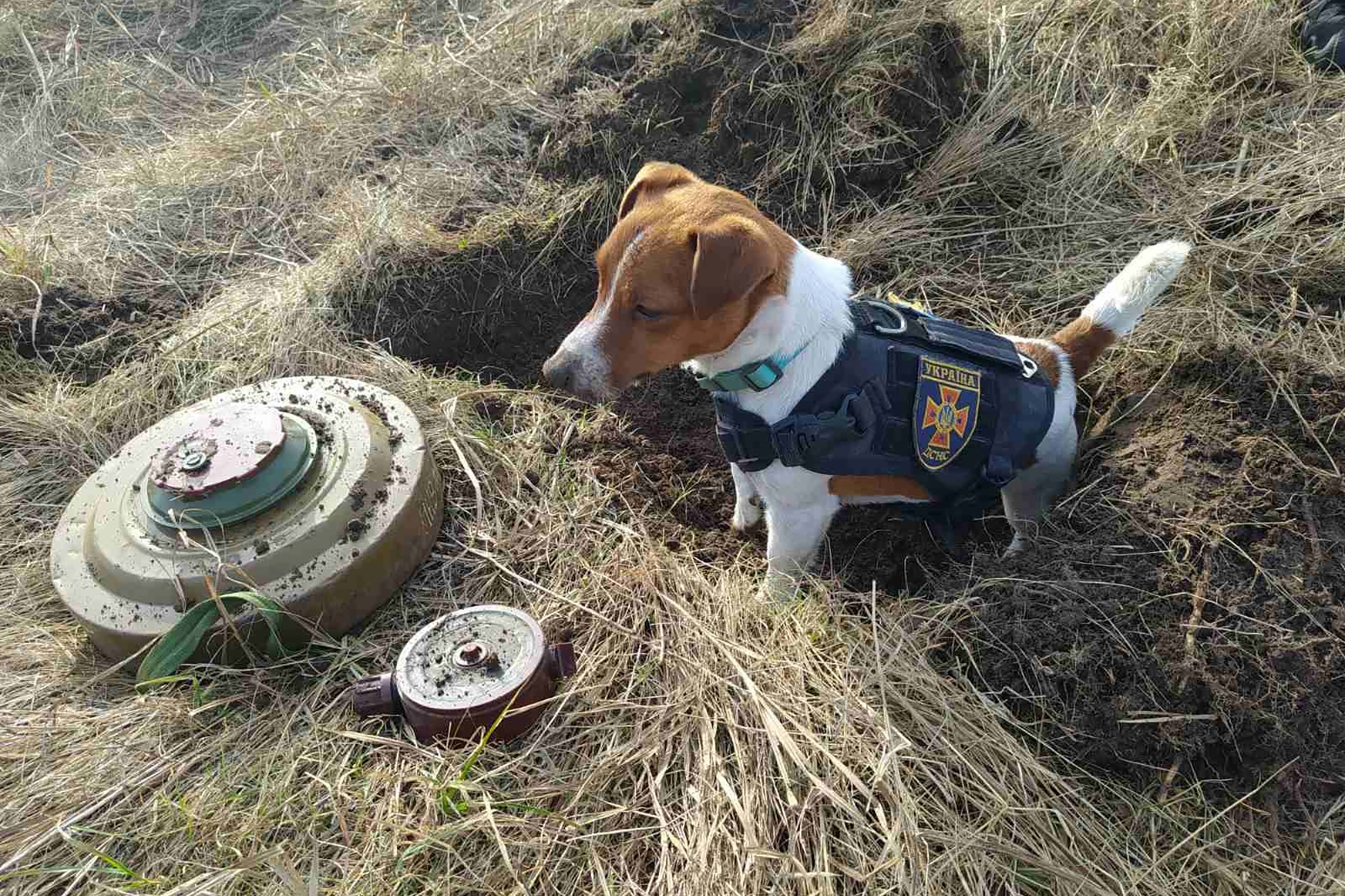 Patron, the dog mascot of the State Emergency Service of Ukraine, in Chernihiv Oblast. He is two years old and loves cheese. Photo credit: Ukraine Government

Among the mines used are several models never before seen, including one produced as late as 2021, according to Human Rights Watch.

Russian mines are placed by hand, from vehicles, or by launchers, with a range as long as 3 miles, the organization said. Some mines are detonated remotely, via a tripwire, or by the seismic impact of a person walking nearby. One model has an effective range of just over 50 feet, according to Human Rights Watch.

Russia has used banned mines in other recent conflicts, including in Syria and Libya, the group noted.

Though Russian diplomats told the UN General Assembly in 2020 that the country “supports a world free of mines,” it has resisted limits on their use, calling mines “an effective way of ensuring the security of Russia’s borders.”

“Developing and producing landmines that most countries have rejected is a morally reprehensible investment,” Goose stated. “Mines set to self-destruct at random intervals only increase the risk of civilian harm, especially for deminers tasked with safely destroying them.”