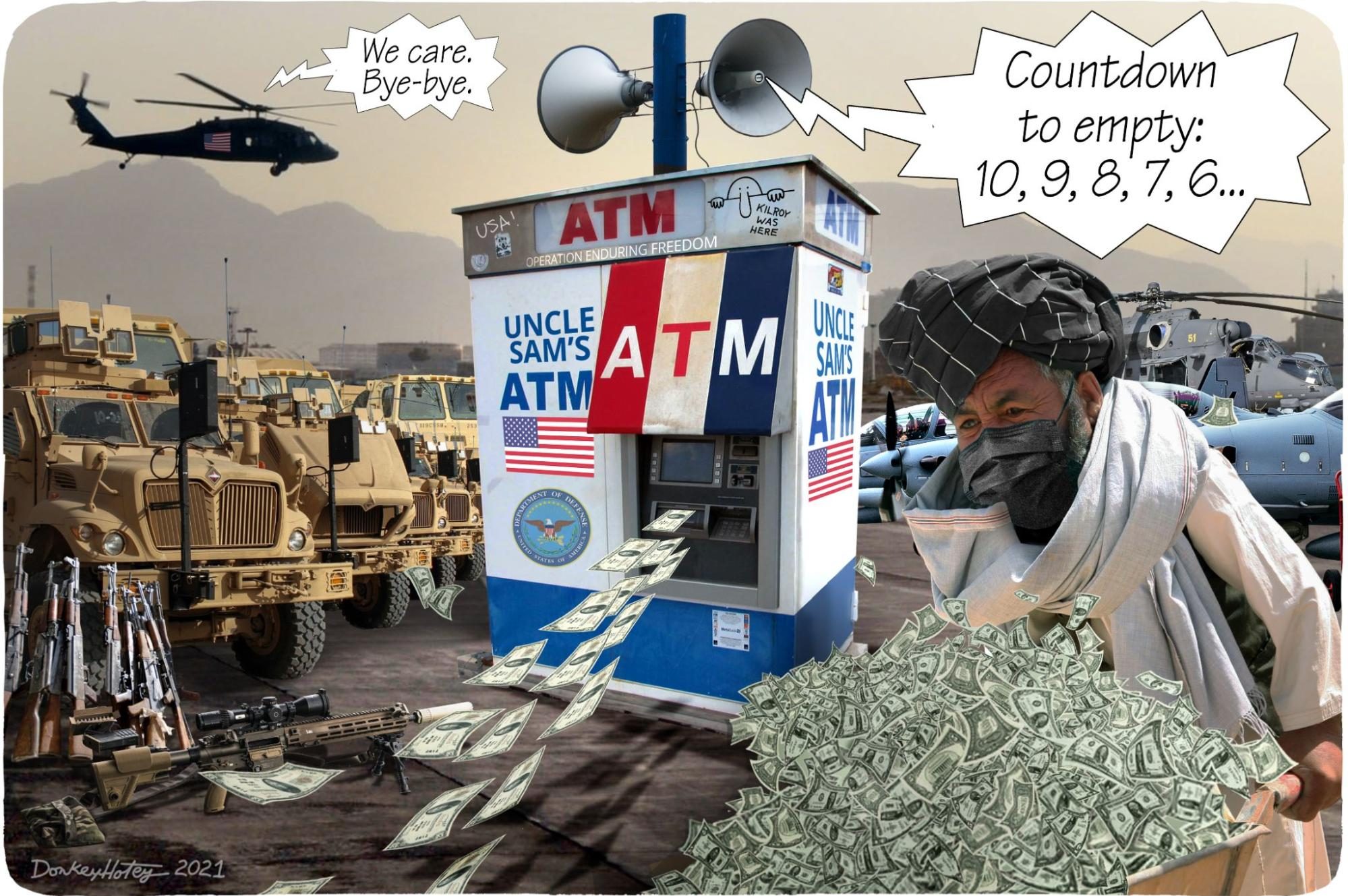 Mission Accomplished: The War in Afghanistan Was Great for Business

The US’s 20-year misadventure in Afghanistan is a mirror. Its meaning depends on the gazer. It’s a humanitarian catastrophe, the latest round of the nearly 200-year-old Great Game between imperial powers, a graveyard of women’s rights, and the best opportunity for smug and satisfied “I told you so’s” from every take-spinner within Skype distance of the Beltway. But for most Americans, the Afghanistan stage of the global war on terror is best understood as a giant ATM with a ghastly service fee in lives lost, time wasted, and — most importantly, in some corners — cash burned.

The war in Afghanistan did not fail. For think tanks, for contractors, and for the profiteers and opportunists who run every war machine, the war has been a smashing success.

Imagine thinking the war in Afghanistan "failed." Brother it was the best 20-year racket since this country's adventures in the Philippines and Central America! pic.twitter.com/7H07ymGJHT

Versions of this take, shamelessly lifted from former US Marine General Smedley Butler’s “war is a racket” analysis, have appeared in The Intercept and on Twitter feeds in the past week since the US-funded and -supported Afghan security forces melted away, President Ashraf Ghani fled the country (wouldn’t you?), and the Taliban drove straight down Main Street into Kabul.

It’s neither original nor nuanced — then again, neither is war — but there it is: In addition to at least 238,000 war deaths — including 113,000 Afghan soldiers and civilians killed — the US spent $145 billion on civil engineering, agriculture, and other nation-building projects in Afghanistan since 2001. Meanwhile, the Pentagon blew $2.26 trillion total since September 2001 on the whole war effort: troops, trucks, planes, cafeterias, gym equipment, bribes, etc.

Where did all the money go? It did not stay in Herat (if it ever made it that far). Look in your own backyard (if you have one). As Georgetown University securities studies professor C. Christine Fair wrote in Foreign Policy, “Between 80 and 90 percent of outlays actually returned to the US economy.” The money came back, but not to you. That is to say: Your tax dollars went to pay defense contractors, construction firms, anyone who pounced on an opportunity. Congrats, friend: The tax money you might prefer to fill a pothole or pay for your kids’ school didn’t line a mullah’s pockets. It more likely helped fill an executive’s garage or shareholder’s pool.

Lefties will say the global war on terror was in fact a titanic shell game, a redistribution of public wealth into private pockets. A recent riposte, from Fred Kaplan in Slate, argues the war machine would have done just fine without Afghanistan; that most Pentagon spending is on fantastic new gadgets like stealth destroyers, the $1.7 trillion F-35 joint strike fighter boondoggle, new nuclear missiles, and the like.

This is, of course, speculation — would defense contractors have done just as well without this enormous opportunity? We’ll never know, and by arguing that just because Boeing, General Dynamics, and Lockheed Martin didn’t “need” Afghanistan to make money, Kaplan ignores the enormous logistical outlays required to field an army for two decades on the other side of the world.

The United States is not “done” with Afghanistan. As OpenSecrets reported on Friday, the Pentagon had issued another $1 billion worth of contracts to 17 companies to do work beyond the original May 1 withdrawal date.

At the moment, the US must figure out what to do with the tens of thousands of Afghans who provided translation services, served with soldiers and Marines in remote valleys, or just decided to go get a job slinging hash at Bagram or whatever other temporary city sprang up around an airfield or strategic crossroads in the high desert — many of whom are on Taliban kill lists and are running or hiding for their lives. Two thousand United States Marines, along with British paratroopers and what’s left of the Afghan army, are currently providing security at Kabul’s airport.

After the “Digital Dunkirk” comes the blame game. Trump acolytes like Mike Pompeo, the former secretary of state and likely 2024 presidential contender, are backpedaling as fast as they can from their roles in cutting a deal with the Taliban and setting a withdrawal date. Pundits are pushing the question of whether President Joe Biden’s Pentagon and State Department blew the US’s withdrawal (sure seems like it) and whether Biden was right to do what every president since Barack Obama has vowed to do and get out of Afghanistan (if not now, then when?).

Then comes more Great Game. Now China and Russia will step into the “gap” left by the US,  though what that means is unclear. Belt and Road power plants using Xinjiang coal in Helmand? Wagner Group mercenaries taking over for US contractors? Same project, different empire? It isn’t clear. The Taliban received money and training from nuclear-armed Pakistan; will that aid continue? Will Afghanistan affect that country’s dance with India?

As an alternative to the patently corrupt, US-supported Kabul government, the Taliban behaved like the definition of a functional state — collecting taxes, providing security. Whether they can hold it together is an open question.

Clear signs that war and governance are not the same are already appearing, even as the evacuation continues.

In Kabul on Thursday, 200 protesters carrying the fallen Afghan government’s red, green, and black tricolor squared off against Taliban militiamen carrying Kalashnikovs. As many regimes before have demonstrated, Afghanistan is mostly a state in name only. Nobody seems able to govern the country as drawn for very long without aid from without — and this includes the Taliban, beneficiary of material aid from Pakistan.

In a few year’s time, if there’s a rebellion against the Taliban, don’t be shocked if it turns out the uprising is funded by the United States — using American weapons, paid for by American dollars — and the Great Success starts all over again. In the meantime, Taliban fighters will cruise around in American-paid trucks, using American-paid guns — and they’’ll need gas and bullets from someone.