Mikhail Razputko, editor of the ‘Province’ newspaper, said that people in Eastern Ukraine are divided between those who rely on Russian media outlets and those who prefer Ukrainian ones. Photo credit: Emil Filtenborg / WhoWhatWhy
International Ukraine

In Ukraine, It’s Hard to Know What to Believe

KONSTANTINOVKA, Ukraine — Gas masks sit at the ready on a table in the newsroom of Province, a local weekly still scarred by the last war in Konstantinovka, an industrial city near the frontline in Eastern Ukraine. While the threat of a Russian invasion is looming, Province’s journalists explain how pro-Russian and pro-Ukrainian media have long been engaged in a war to shape public opinion here in the contested Donetsk region.

“Quite a large percentage of people here are relying on news from Russia. Maybe 30 percent,” said Mikhail Razputko, the editor of the newspaper. “However, I believe that it has decreased over the years since 2014, as many people have understood that Russia spreads lies, and due to the banning of the Russian channels.”

You can no longer watch Russian TV in Ukraine, so people who want to watch the news from Ukraine’s giant neighbor stream those channels on the internet.

“You have to understand that some people here grew up in the Soviet Union and that they think that they are somehow Russian or [have] a connection to Russia,” said Razputko. Many people, however, were so shocked by the Russian actions in 2014 that they changed their view and became more pro-Ukraine, he said.

In 2014, after the Maidan revolution forced then-Ukrainian President Viktor Yanukovych from office, Russia annexed the Crimean peninsula, and war broke out in Eastern Ukraine between Ukraine and Russia-backed separatists. Around 14,000 people have since lost their lives, and hundreds of thousands have been internally displaced.

“People here live in poverty. First, as a result of the collapse of the Soviet Union, and afterwards, due to the war that started back in 2014,” said Razputko, who experienced the war firsthand. 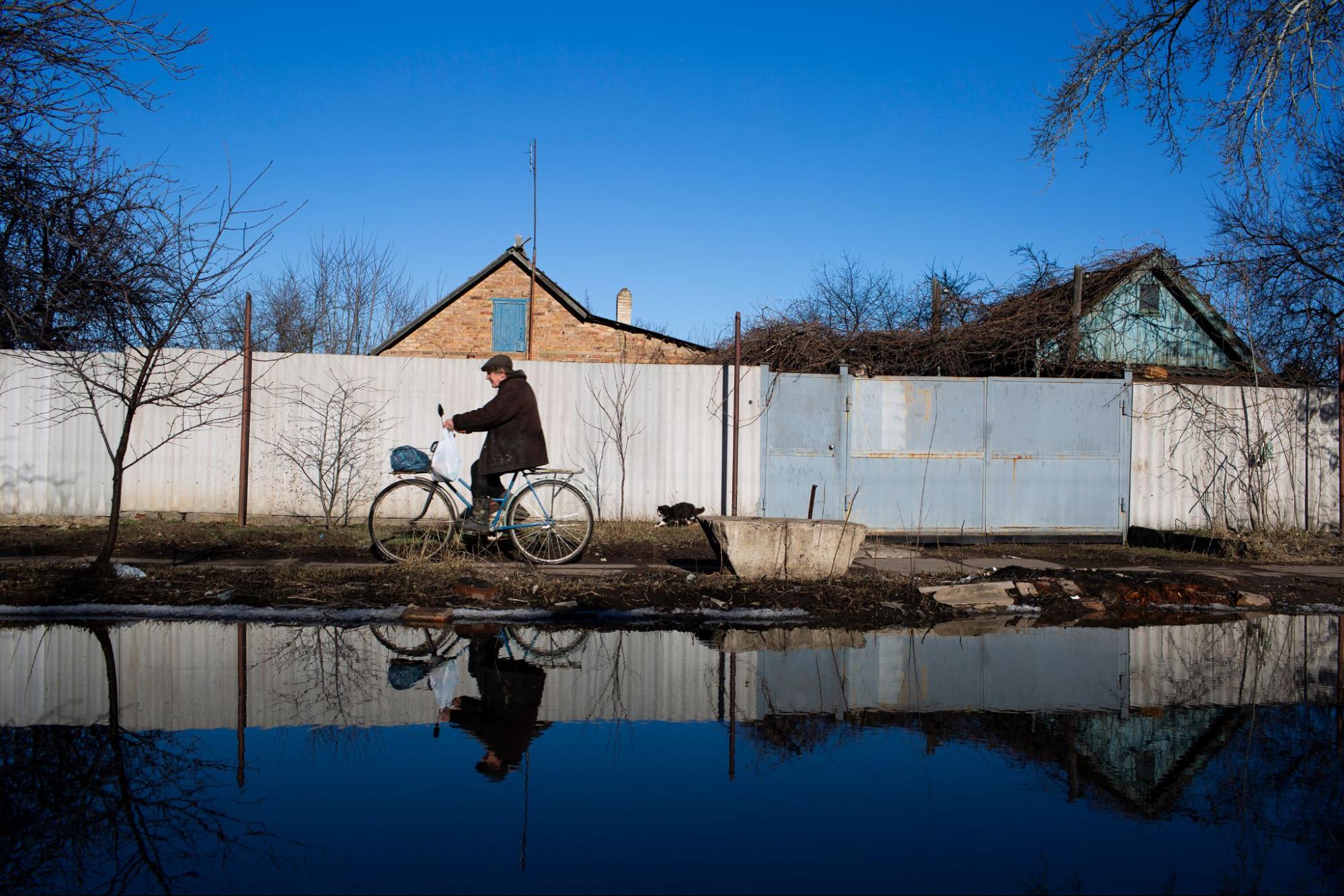 The city of Konstantinovka has been impoverished since the war broke out. People have lost their jobs and struggle to make ends meet. Photo credit: Emil Filtenborg / WhoWhatWhy

The Attack on Media

Back in 2014, Russia-backed separatists captured Konstantinovka and took over Razputko’s paper, turning it into a pro-Russia one, but not before setting the office on fire.

“Militants came with pistols, tore down our cameras, and closed us down,” said Razputko, whose office is still marked by the war, with damaged walls and a few holes in the roof patched with pieces of wood. “They even captured one of the founders of our paper. It was really scary,” he added. “I can fear that something like that will happen again.”

The Ukrainian army eventually reclaimed the city, but not nearby Donetsk, which remains under separatist control. “Konstantinovka is not far from Donetsk. We cannot know what Putin might do, so we have some concerns,” said Razputko.

The fighting in 2014 was also accompanied by a Russian propaganda war. Among the fake news stories promulgated by Russia, the most famous was an account of how the Ukrainian army crucified a three-year-old boy. It was the Russian state-owned Channel One that broadcast that one.

In the story, a woman who claimed she had witnessed it told how the Ukrainian military tied the boy to a tank and drove around the square in the city of Slovyansk. The story was later found to be fake.

Ukraine has since banned Russian media in Ukraine and has recently also banned a number of news outlets that the government deemed pro-Russian. The Ukrainian government has also launched their own state-run Russian-language channel, “дом,” targeting Russian-speaking people who live in Crimea and the separatist-controlled territories in Eastern Ukraine.

This stepped-up effort to counter the Russian narrative followed widespread attempts by Russian state-media to sway public opinion in Ukraine in 2014 and 2015, said Aleksey Jakubin, an associate professor at Kyiv Polytechnic Institute in the Ukrainian capital.

Not that Russian efforts have stopped. During the current crisis, the US and its allies have warned that Russia was planning to create a fake story of Ukrainian atrocities to justify an attack. US officials claimed that it would involve the use of corpses, drones, and actors.

That, however, hasn’t happened at this point, and Jakubin said that he hasn’t seen Russia trying to influence public opinion in Ukraine as much as it did back in 2014.

“We haven’t seen any such stories as we did back in 2014 at this point,” said Jakubin. “I think that one reason for that can be that while some people still watch Russian media, not as many Ukrainians trust Russian media anymore.”

“Some are also so tired of both the media campaigns from Russia and Ukraine that they simply do not follow the news anymore. They are tired from this war, which has lasted for eight years, so they do not pay attention, so they are harder to influence,” he added.

Over the last couple of weeks, however, Russian channels have pushed some fake narratives. The East Stratcom Task Force intiative EUvsDisinfo found that a pro-Russian channel broadcast a story about Ukraine using “videoes of gay couples to improve their fighting spirit.”

“In fact, the original video was shot in 2012 in the UK by the Coalition for Equal Marriage, an organization that advocates for equal marriage for the LGBTQ+ community, and there are no signs or indications of the Armed Forces of Ukraine,” wrote EUvsDisinfo.

Jakubin said the Ukrainian decision to ban a number of Ukrainian media outlets that the government deemed pro-Russia has backfired to some extent, angering some loyal viewers. Instead of watching pro-Ukraine channels, some might have switched to Russian outlets online on sites such as YouTube.

Many Ukrainian channels, he said, are broadcasting anti-Russia narratives, which has made some people in Eastern Ukraine simply disregard them. Many Eastern Ukrainians speak Russian as their first language, not Ukrainian, and the rejection of their language and heritage has pushed some people away, Jakubin asserted. 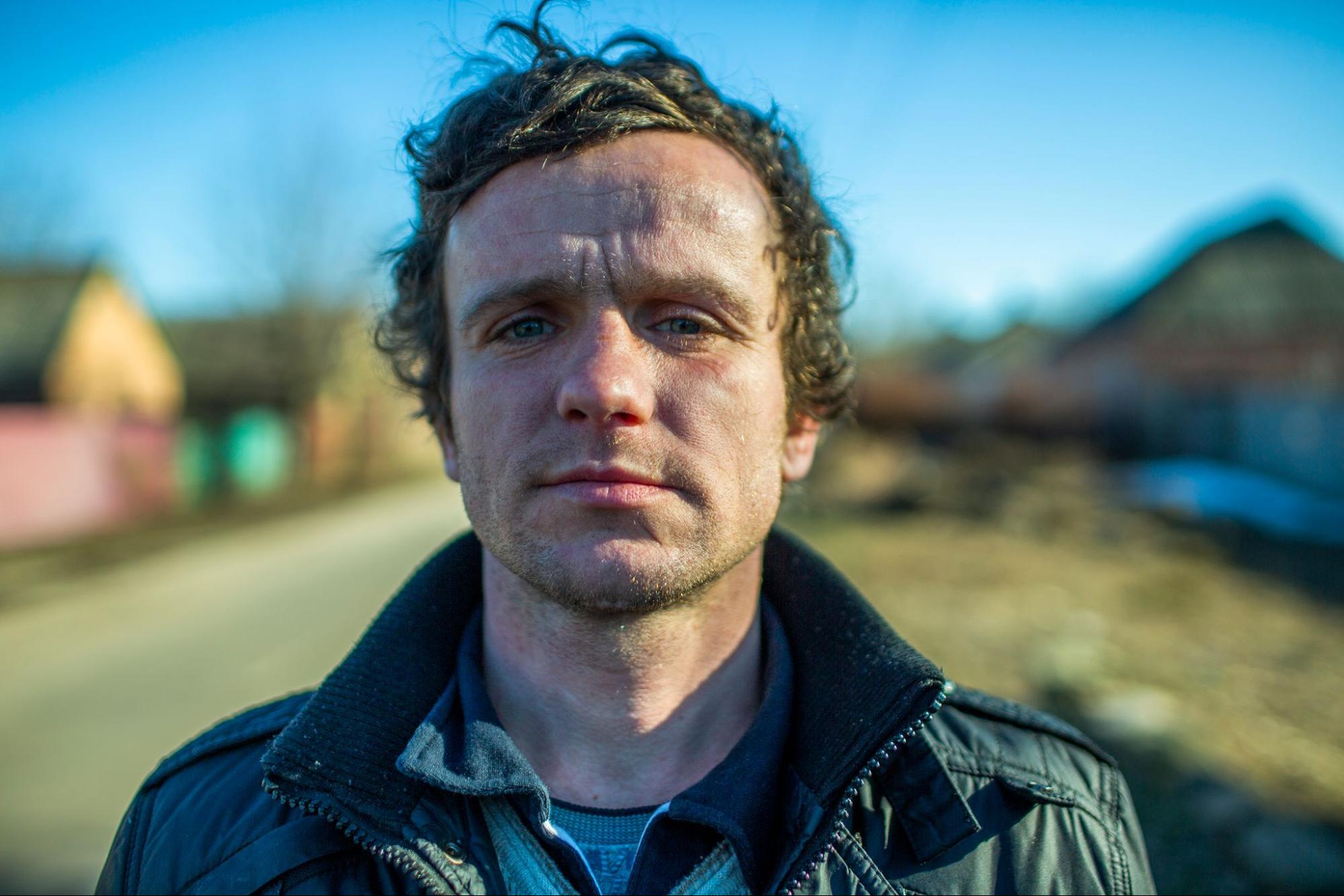 Misha says that everyone in Konstantinovka just wants peace more than anything. He thinks that it might happen in the future. Photo credit: Emil Filtenborg / WhoWhatWhy

In Eastern Ukraine, WhoWhatWhy spoke to several people who said that they just do not watch the news anymore. On the streets of Konstantinovka, 30-year-old Misha, who works at a shop selling spare parts for cars, said that he no longer believes Russian media. He still watches from time to time, as he tries to take in a little of everything. But he also doesn’t believe everything he hears on Ukrainian TV.

“On Russian TV, I can understand that Ukraine is about to launch an attack from Kharkiv [a city in Eastern Ukraine] and into Russia. That is, of course, not true,” said Misha, who didn’t want to give his full name. “Why should we do that?”

On Ukrainian media, he added, the opposite can be heard, and he thinks that the Ukrainian media is pushing too hard when it comes to the rumors of a Russian invasion.

Seventeen-year-old Igor, who didn’t want to give his full name, told WhoWhatWhy that he’s completely stopped listening to Russian, Ukrainian, and foreign media outlets. He instead relies on what he describes as more independent news on YouTube, but he’s mostly just stopped following events.