Glacier near Stella Point on Mount Kilimanjaro, at an elevation of roughly 18,000 feet. Africa’s glaciers are likely to melt completely by 2040 due to climate change, most of which has been caused elsewhere. Since 1751, Africa has contributed a lower percentage of cumulative worldwide emissions than any other continent. Photo credit: Christoph Strässler / Flickr (CC BY-SA 2.0)
Environment International

In Africa, Climate Change Is Increasing Hunger and Poverty

Polluted water. Dying livestock. Widespread infectious disease. Extreme storms. Swarms of locusts. It sounds like something from the plagues of Egypt detailed in the Book of Exodus. But these are just a handful of the climate-related threats facing Africa today.

Of Earth’s seven continents, Africa contributes the least to climate change on a per capita basis, excluding ice-and-snow-bound Antarctica. But Africans are paying a disproportionately heavy price for the rest of the world’s carbon dioxide emissions.

The result — according to a new multi-agency report from the World Meteorological Organization (WMO) — is a looming disaster that threatens the lives and livelihoods of tens of millions of people in the near future.

“By 2030, it is estimated that up to 118 million extremely poor people will be exposed to drought, floods and extreme heat in Africa, if adequate response measures are not put in place,” wrote H.E. Josefa Leonel Correia Sacko, the African Union Commission’s commissioner for rural economy and agriculture. The report defines “extremely poor” as living on less than $1.90 per day.

Grim statistics spell out the dangers.

Yet it’s the locusts that come closest to calling up images of a biblical plague. First, increased rainfall caused “abnormal” vegetation growth; this created prime conditions for locust feeding and breeding. The result: Swarms of desert locusts wreaked devastation on farmland, which led to food shortages throughout East Africa last year. Ethiopia and Somalia were hit hardest, losing hundreds of thousands of tons of food crops. A swarm of 80 million locusts can destroy enough crops to feed 2,500 people for a year.

The report provides further evidence of the need for global leaders to agree to reduce greenhouse gas emissions during the current UN Climate Change Conference in Glasgow (COP26) — and emphasizes how vulnerable are Africa’s residents to a warming planet.

Storms join droughts and floods as the continent’s most common natural disasters. The southwestern Indian Ocean is particularly susceptible to cyclones, whose number in the 2019-2020 season exceeded the long-term average. Floodwaters brought by cyclones and other extreme rainstorms contaminate drinking water, cause illness, and become prime breeding grounds for mosquitoes that carry malaria and other diseases. 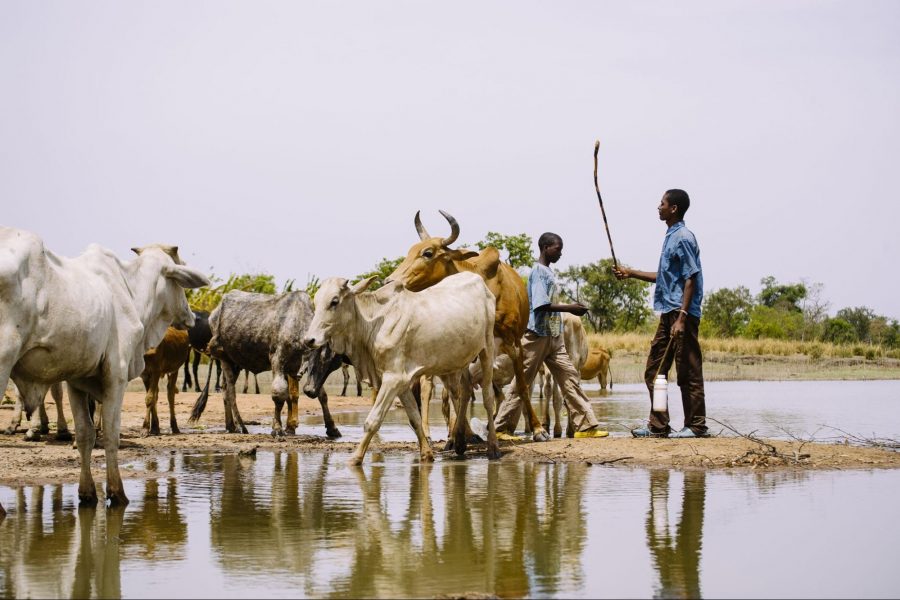 Young men watch over their cattle at a reservoir in Burkina Faso. In 1992 the West African nation was an early signer of a UN convention on climate change, but it has been hit hard by drought and desertification. Photo credit: CIFOR / Flickr (CC BY-NC-ND 2.0)

In addition to threatening farmers’ livelihoods through the loss of seeds, crops, and livestock, last year’s extreme weather forced millions of Africans to abandon their homes. In East Africa and the Horn of Africa — especially Sudan, Kenya, and Somalia — weather disasters drove 1.2 million people to migrate, more than twice the number caused by military conflicts. In West Africa, Burkina Faso, Mali, and Niger, an estimated 1.25 million people were displaced, according to the International Organization for Migration.

This migration is part of an increasingly recognized climate-related problem: the need for millions of people to leave their homes due to weather disasters, rising sea levels, and lack of agricultural sustainability. The World Bank estimated in 2018 that 143 million people could be driven out of sub-Saharan Africa, Latin America, and South Asia — with the majority, about 86 million, from sub-Saharan Africa.

Since the continent already has relatively low carbon emissions, most African countries are focused on adapting to climate change rather than mitigating it. The report’s analysis of the nationally determined contributions (NDCs) of these countries, as specified under the 2015 Paris Agreement on climate change, called for efforts to be concentrated on agriculture and food security, water safety, and reducing the risk that comes with disasters.

The African Development Bank Group has estimated that the continent will require more than $3 trillion in investments by 2030 for these NDCs to be fully implemented. Twelve years ago, at a United Nations climate summit in Copenhagen, rich nations promised to channel $100 billion a year to less wealthy nations by 2020 to help them adapt to climate change and mitigate further rises in temperature. But that promise was broken.

Adapting quickly to climate change — following guidelines set out in the African Union’s Green Recovery Action Plan — would have additional benefits, according to the WMO climate report: an increase in economic growth, a quicker recovery from the COVID-19 pandemic, and a sustainable and green environmental future.

Although the report emphasizes that recovering from the pandemic and developing an environmentally sustainable future should go hand in hand, COVID-19 is only one climate-related health problem in Africa. Extreme warming has been shown to increase the prevalence and range of vector-borne diseases, including malaria, dengue fever, chikungunya, and West Nile virus, all of which are already common on the continent.

For Africa’s green future to be realized, priorities will have to shift to adaptation and climate resilience, according to Gregory Nemet, professor at the University of Wisconsin–Madison’s La Follette School of Public Affairs. “There is so much potential for growth and improved wellbeing in Africa, and consequently there has been increasing investment there,” said Nemet, who was a lead author of the sixth Intergovernmental Panel on Climate Change report. “But far too much … investment has been extractive and too much of it has been focused on fossil fuels.”